It's a pretty picture, but is it realistic?

Today we’ve had a newspost about Building the foundations for an evolved EVE experience.

It had a rather nice picture about sights we might expect in the future: 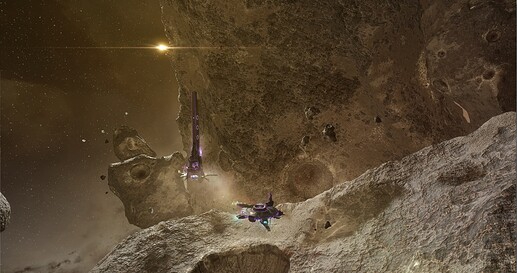 It sure looks great! Just look at those colours of the stations. And those massive asteroids. Enormous! Those rocks make those stations look like small Ventures in an asteroid belt!

I love the textures and colours, but something feels off.
As if the scale is wrong.

And I think it is.

It’s not a spherical object!

Here’s some numbers:
Marginis Fortizar is 100km along the long axis.

From the picture we can see the size of this bulky asteroid behind the Marginis Fortizar has a radius many times bigger than that.

If it is that big, why does it feel like I’m looking at an asteroid with some floating rocks around it, rather than a celestial object the size of a large moon with satelite rocks in orbit?

That’s because the artists scaled up a regular asteroid for a pretty picture, but forgot that you cannot scale up objects indefinitely without changing the physics that affect them. After all, eventually an object would be big enough that it becomes spherical under it’s own hydrostatic equilibrium.

The asteroid in the picture is clearly a lot bigger than those sizes, maybe even three, four times bigger? (Hard to tell how big exactly, it might be even bigger with half the asteroid falling off the picture).

As such, I would expect that rock to not look like a regular blocky non-spherical belt asteroid, even though it is a very pretty belt asteroid with incredibly detailed textures.

Instead, I would expect it to look more like this: 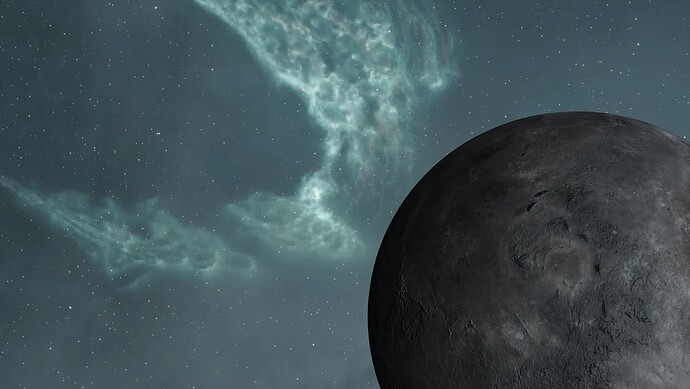 You know, a sphere.

Thanks for listening to my rant.

That does look awesome, if they give more of EVE such an overhaul then that would be amazing. Can’t wait for the “I’m zoomed out so much I don’t see it anyway” grind bots to hate on it because “it doesn’t add anything”.

I agree it looks awesome!

Just a bit weird at that scale.

Let’s be honest, the most unrealistic thing about Eve is that it is set what… 20k years in the future and there are no cat ears.

As such, I would expect that rock to not look like a regular blocky non-spherical belt asteroid, even though it is a very pretty belt asteroid with incredibly detailed textures

A lot of asteroids can be gigantic and still have an irregular surface.
The most common of those I imagine are between 200 and 300km with Ceres at more than 970km and Vesta at 580km in circumference to name only a couple of the trillions that may float in the universe. 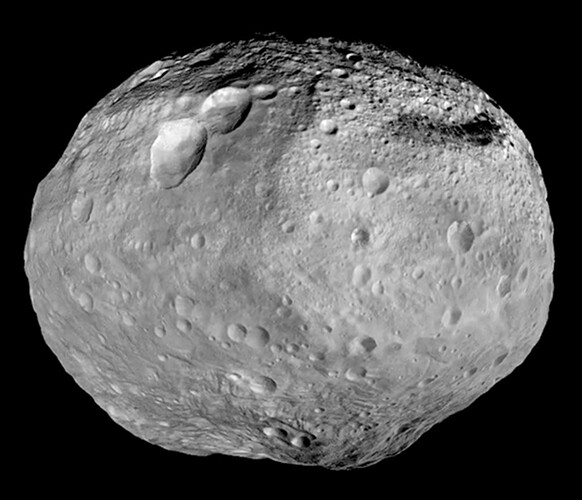 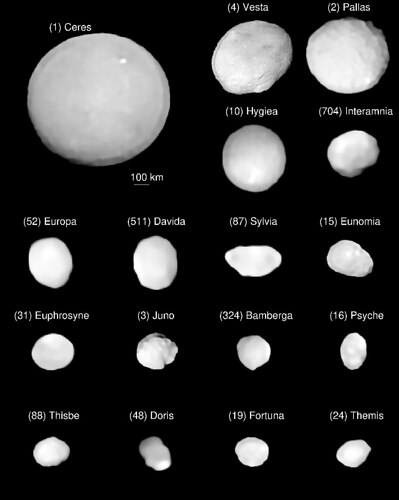 While larger irregular asteroids do exist, you do see that they get closer to spherical the bigger they are.

I like that we’ll get large objects that aren’t all the same identical perfect spheres that the moons in EVE currently are, but it would be nice to have those gigantic objects still follow some idea of ‘gravity’ to give us the intuitive feeling that these celestials are massive, instead of looking like a few weightless floating rocks.

The scales in that picture would be perfect if the 100km long station were replaced by a 100m long Venture.

I like that we’ll get large objects that aren’t all the same identical perfect spheres that the moons in EVE currently are, but it would be nice to have those gigantic objects still follow some idea of ‘gravity’ to give us the intuitive feeling that these celestials are massive, instead of looking like a few weightless floating rocks

I agree. I hope that the artists at CCP pay attention to realism as much as fantasy.
Maybe the rotation rate of the huge pixelated asteroids could reflect their mass. We only have a pic to judge by.

Is it realistic to have minerals in asteroids which, presumably, aren’t found on planets at all and of which only two are found on moons?

Is it realistic that these exotic, completely fictitious minerals are the basic building blocks of almost all the technology in New Eden -

Is it realistic that not all materials - whether asteroid minerals or moon materials - are found in every system?

Is it realistic that you take “precious metals” and “toxic metals”, whatever their actual composition may be, and you smoosh them together to create uranium - an entire element?

■■■■ realism, give me good gameplay and awe-inspiring visuals.

It had a rather nice picture about sights we might expect in the future:

That looks like a scene from the new NPE, which I did not that long ago for a new account.

And it’s also a very poor design, EVE could have (I’m not asking for it) implemented a separation of concerns between acquisition and manufacturing, meaning raw materials being transformed into components.

It’s done and it’s sad people think is that ‘realistic’, maybe because they were introduced to metric system?

Just because other things in EVE also aren’t realistic doesn’t mean we need even more things that break our (or at least my) suspension of disbelief!

Production of PI materials has been a bit weird since thrir introduction. Oxygen, a noble gas?

Or the horizon we can see in the Skybox in Pochven. A horizon in 3D space?

Of course not everything can (or should be) realistic, it’s a game after all with focus on entertainment, not realism.

But when huge celestials do not act like huge celestials and compress into a more spherical form under their gigantic mass, but rather act just like asteroids tens of thousands times smaller, we as players get the intuitive feeling that these rocks aren’t all that massive or big at all.

It’s as if you see a man walk on water, using the surface tension. It’s weird and not natural, even though at a different scale, that of insects, it certainly is possible to do so.

a lot bigger than those sizes, maybe even three, four times bigger?

will they be putting as much emphasis into preventing TIDI epic fails as they do into pretty stuff?

Every MMO has various teams working on things. So the art and graphics team needs to have something to do regardless, and would have little to do with TIDI.

CCP has always used pretty graphics and nice space backdrops as part of their sales push. You can see from all the videos they produce that show Star Wars-style space combat whereas actual gameplay is more like “look at the dots and lines drawn on the screen and all these texty interface windows”. Of course, with TIDI that also changes to “Look at all the dots and lines and text. Then, come back 20 minutes later to see if anything’s changed.” So yeah, not exactly Star Wars.

Maybe CCP should stop advertising things they can’t provide, but I guess that’s not gonna happen.

At any rate, while CCP desperately needs to stop trying to squeeze more and more $$ out of an ever-shrinking player base and actually improve the game to the point where it attracts new business, there’s no good reason not to improve and update the graphics in the meantime.

the cool graphics attract short term players, so they get the bucks , once people decide to stay and play, they go potato mode to reduce lag.
does anyone think all this beautiful stuff is going to improve gameplay by reducing lag?

Graphics are rendered client side, so shouldn’t have any impact on lag either way. Again, lag/TIDI isn’t something the graphics team would generally be working on. There may be some integration with the physics/modelling side to make sure the client doesn’t get too bogged down, but TIDI would mostly be a factor of server calculation of many thousands of objects, angles and effects, and the synchronization thereof.

the cool graphics attract short term players, so they get the bucks , once people decide to stay and play, they go potato mode to reduce lag.
does anyone think all this beautiful stuff is going to improve gameplay by reducing lag?

Why isn’t the artist team working on more marketing for the game?
Why aren’t the testers creating more skins?
Why isn’t HR improving faction warfare already?

Different teams do different things. Graphical artists do not work on their server infrastructure to reduce lag.