I’m trying to build an Amarr battleship with similar dps at 60+ km optimal. Most I can get is around 300 or so dps at 3-4 seconds rate of fire.

But I’m realizing that in order to have similar dps to my raven I have to times my laser rof by 2. Because my thinking is if my lasers do 300 ish dps every 3s, that means they will do 600+ in 6-7 seconds which is the rof of the raven.

So technically I can out dps the raven if I have faster rof and slightly more damage.

Is this the correct way to look at this?

You have to take into account what you are shooting at remember. Different weapons for differnet rats and all that

Turret mechanics and missile mechanics are vastly different. Missiles will always look like they do much more damage at a vastly superior range, but its up to the targets speed, signature, and etc on how much actually gets applied.

DPS is a your volly\RoF

Here is an example T2 Raven with T2 Cruise missiles

Here is a rough sample of what it’s actual DPS would be on a variety of targets at their orbit speed around you. 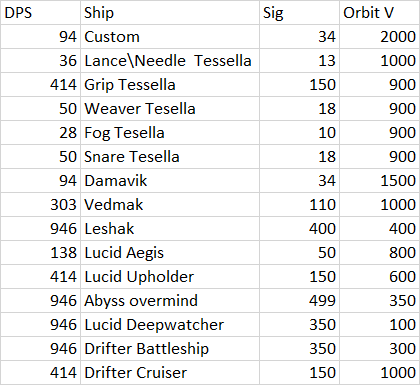 paper DPS is only relevant when you actually apply that DPS. 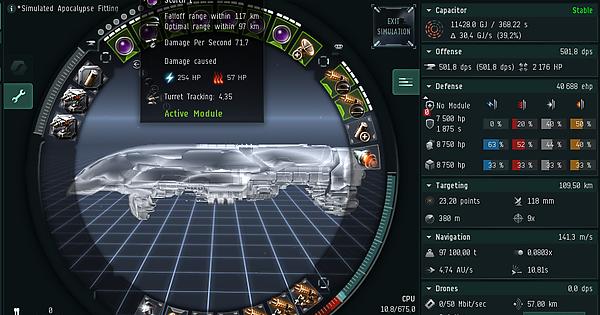 Wow fast replies and a lot of information!

I rat in null against drones, I warp at 100km and snipe from there and MJD out if they get too close.

What Amarr battleship can perform similarly? And I don’t have skills or money for a Paladin. Can fly t1 bs only.

Missiles are often preferred for PvE because you can select your damage type. They have two big disadvantages that don’t always get accounted for:

My experience with missiles is that they are a lot slower than turrets. They are easier to manage and more flexible, but do less damage overall. The math on turrets is more complicated, and once small targets get close to you it can be difficult to apply any damage at all. With missiles you can just keep pounding that interceptor with cruise missiles and eventually you will win.

This is a good point, since the NPC rats tend to spend a lot of time flying straight toward you and missiles cannot take advantage of this.

So in that case an Apocalypse or an Abaddon with beams would work better in I warp in at 100km? And I’d let drones take care of the small stuff.

the fit I gave is fit pulse scorch.

I use a rattle with cruises and sentries. When I land i deploy sentries at about 50-70 km. The frigs will mwd towards me and be installed by sentries. Once they are done I take care of the big guys. When some of them are too close, deploy heavies. Been very effective so far.

Similar, but mix of light and heavy drones for close in combat, and sentries for range.
Use HRML’s with Twin Tracking computers with ether range or precision scripts. Use cheap T1 missiles.

Works a treat, tends to work better than cruise or light.

Forgot to mention I got lights too xD

You can also try the Typhoon. It can field 4 Sentry Drones for the incoming small stuff (Curators for ~ 60 km or Wardens for ~ 100 km) and Cruise Missiles for Battleships and Battlecruisers. I don’t know these sites, so you might need to adapt the tank to their exact damage type.

A major factor is that lasers are a more elegant weapon for a civilised age.

DPS of missiles has a maximum damage, and can only do less based on target size, speed, missile explosive radius and explosive velocity.

The have a 100% hit if target is in range. There is no way to control the path of a missile once it has been launched. It will point itself at its target and follow the target until it hits or runs out of fuel.
For more info on missile damage; https://wiki.eveuniversity.org/Missile_mechanics

Lasers and other weapons do have an DPS, but this is subject to if the hits lands, and then how well the hit lands. They all have a possible of 300% damage with a critical hit.
For more info on turrets; https://wiki.eveuniversity.org/Turret_mechanics

Just to throw an extra spanning in you then have resistance adjustments to your damage.

Get both and you have a great DPS potential, but still subject to other factors.

If a launcher has a 1.5 average missile duration, and missile go 10km/s, half the missiles will be 1s so 10km, half will be 2s so 20km.
Your launcher shows 15km range but only 50% of missiles will hit at this range.