Its about time we talked about Missiles again

This thread is meant to start a discussion on a way to resolve an issue and bring missiles in-line with other weapons platforms.

Missiles have always been a sticking point for me in EvE. Missiles don’t miss. They do take some time to get to their target, but they just don’t miss. If you’re transversal is high, so much that even the smallest guns won’t track, missiles still hit. They may do low/no damage if you’re going really fast, but they still hit.

This makes them one of the most consistent weapons in the game. Along with completely ignoring tracking, versus a larger ship than missile size, the damage is the same from 0 to max range. Add in that you can stick ‘rapid’ versions of smaller weapons on larger ships, giving them even further advantage as signature isn’t an issue either.

These things all combine to one of the reasons that after the resist nerfs, missiles are in even better of a position, especially since they don’t care about range since they have no falloff aside from ‘max range’

Warheads have effective ranges. Explosion range would matter as dissipation would be different based on warhead size. But velocity… not so much. That would be relatively the same for various sizes of warhead.

The fact that missiles completely ignore tracking is a bit stupid. Missiles track just like guns - the difference is that they can track after launch. Transversal still matters.

I do know that CCP can’t have missiles update transversal during flight. The calculations required when there are hundreds of thousands of missiles in space at any given moment, if not millions, would cause the servers to melt. So we can’t really use a realistic mechanic for missiles. However, the way they are now is absurd.

So instead of a guaranteed chance to hit with damage decreasing due to sig/speed, I’d suggest they be changed to be similar to projectiles, but with a few things that make them unique.

Minimum activation range: Basically, missiles going off right next to your ship would be suicide. So missiles generally arm outside a certain minimum range from the ship, based on the warhead size.

Tracking: This would actually be fairly similar to turrets, with a minor caveat – they’d be worse inside optimal, and have a linear falloff from start of falloff to max flight range due to having less fuel to maneuver with. This part is where I’m having a hard time coming up with a way to make it more realistic without making them static like a normal turret - missiles transversal would change relative to the missile, not the launching ship. However for the game mechanics, it might make sense as we wouldn’t want to make so many calculations.

Another thing that is slightly separate but still important to get into is the “Rapid” launcher variants, that let you have a cruiser or battlecruiser with devastating application to frigates, with no similar weapon systems for any other ship aside from the Capital HAW (which are just 3 Large turrets stuffed into one platform, similar to Rapids)

Basically the hit chance would look something like this (excuse my crap paint):

I believe this change would bring missiles in-line with the rest of the weapon systems in the game, making other weapon systems competitive in the ongoing meta, while still being unique.

I’m not saying that this idea is perfect. That is the purpose of this thread, to get people to talk about a way to sort them out in a way that CCP might be able to implement.

The point I’m aiming at is that they’re currently fairly broken, and it’s only gotten worse over time. It’s about time CCP took a look at them. To me the biggest sticker is the “can’t miss” mechanic. Light missile jackdaws hitting from 119km with 1482 volley/241DPS is dumb. (1385/226 without pyro).

Missiles have at least a few downsides too, to be fairly considered in balancing. First is travel time, which for long range attacks quite considerable. Second is that you must maintain target lock while the missile reaches the target (the FOF variants notwhistanding). Turrets hit/miss instantaneously. Third, rapid launch versions have a long reload time.

The minimum range thing wouldn’t work. If they required a minimum range to arm, then a group of frigates could park right next to a bastioned Marauder and kill it without the Marauder even being able to touch them…

They may do low/no damage if you’re going really fast , but they still hit.

Uhmm… yes, for so much damage that passive shield regen will fix it. Also if target has signature smaller than explosion radius the effect is even worse. Is already the bigger the missile boat the scarier frigates/destroyers (especially talwars and assault frigates) become.

Hell, stationary frigate will laugh at precision cruise missiles (15% dps? start moving and it will quickly fall to even lower value). No, missiles are in healthy state in general - they are neither oppressive nor weak.

Along with completely ignoring tracking, versus a larger ship than missile size, the damage is the same from 0 to max range.

Which is also the case for disintegrators, although they are affected by tracking. On another hand missiles are affected by velocity of target… and doesn’t matter if target is doing transversal or ramming you.

Yes, and? Why don’t you mention how much time it takes for that dps to actually apply, or the fact it is shot every 6 seconds? Or that this won’t apply too well vs ab frigates…
Problem with missiles is that they have big ON PAPER dps and projection, but in practice they are from being nearly that good.

Watch Stitch with his MJD Typhoon…

Doesn’t directly answer your question, but poses an interesting mechanic with MJD and cruise missiles

Well the missiles still have such factor as a flight time, so basically yeah, they should turn to follow the mjd, but if their remaining flight time is less than required to cover this new distance - they shouldn’t hit.

Just putting this out there… Lasers.

Please feel free to back up your statements with facts.

Also, these aren’t even equally fit. The Jackdaw is T2 & meta with 2x MGCs (range), 2x BCS, 1 HBT rig.
The others are all using faction. All have 2x Tracking computers, enhancers, 1 damage mod, and locus coordinators. All are in Sharpshooter mode.

Also of mention is that the jackdaw is using faction missiles, the others are using respective T2 ranged ammo, because otherwise the graphs look even worse. 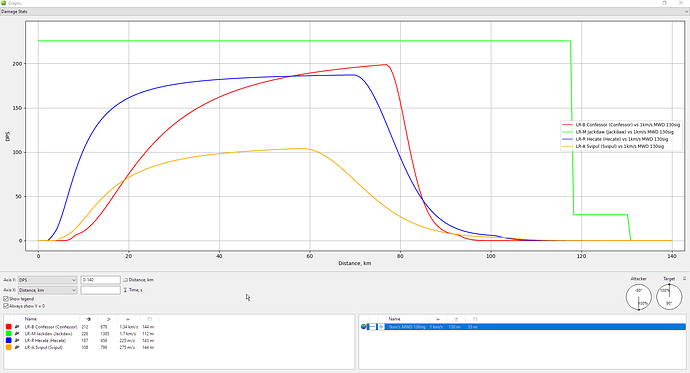 The Jackdaw is just ONE example. Frigates, cruisers and battleships suffer the same with every fit I have checked.

[edit]
For those that are talking about the travel time: yeah, I know. And the point still stands. Travel time is non-existent at close range, and at long ranges where the other ship can’t possibly touch you, there are two things that work - alpha, and being in an un-engageable position where its either warp off, or die.

You could have saved quite a bit of useless typing, by just saying, “Please nerf missiles since I didn’t train them up and don’t want to.”

Missiles have plenty of their own downsides. Leave them alone.

For those that are talking about the travel time: yeah, I know. And the point still stands. Travel time is non-existent at close range, and at long ranges where the other ship can’t possibly touch you, there are two things that work - alpha, and being in an un-engageable position where its either warp off, or die.

A rail Naga disagrees with you.

In certain circumstances your arguments are valid. But like everything else in Eve there are optimal and sub-optimal engagement parameters. Missiles don’t dominate all engagement scenarios and I don’t believe they need a universal change like you are presenting. Some specific changes, (like the already nerfed rapid light launchers) maybe. But across the board?

you forgot to add the kiki on the graph.

Also your target should use a correct MWD. It seems you put a 5mn on a cruiser.

A rail Naga disagrees with you.

artillery 'nado, beam harbinger, beam oracle, rail ferox, sentry myrmidon… loads of ways to reach past 100km, although most of them only on bigger ships. Although caracal with heavy missiles can reach 150km easily enough.

Listening to “nerftards” is how CCP is driving themselves into the ground and they can’t even see it because the 'rona quaratines are masking the real numbers from the combined effects of the market, mining and resist nerfs.

CCP reminds me of a guy I saw who somehow managed to get his hand in front of his shotgun. It wasn’t a long civilian model if anyone was wondering. It was a short mil-issue combat setup, and the result wasn’t pretty. No…not pretty at all.

CCP reminds me of a guy I saw who somehow managed to get his hand in front of his shotgun.

Why do you think it’s called widowmaker ?

I think this proposal would kill a couple of armor boats, the Sacriledge’s primary advantage is that it as an Amarr (armor) hull that can use all 4 types of damage (EM, therm, etc).

I would have to switch to shield Cerb or Rattlesnake for PvE, and slightly gimp their fits so they could respond to light PvP encounters (small tackle).

My Sacriledge is in a good place up to C3 sleeper sites and has the ability to repel light tackle in PvP. With these changes my HAMS could not apply to a frigate tackle. I’d have to rely entirely on my neut drones to break his point (assuming he doesn’t cap booster or nos!)

fit grappler and tracking comp… will make hitting targets much simpler. target painter is nice for missile ships but if you have cruise missiles and can use grappler to web your opponent then he decided to go for suicide. By contrast one has to know how to pull transversal to make tracking of maraduer work to his advantage… and unless marauder is fit with long range guns it won’t have much effect.