You are cleared for flight o7

I’m going to cheat on EVE when MS Flight Sim comes out, it’ll be a long and hot type of side action. I WILL return though, promise.

You’re forgiven. I probably will too.

Who are you and what have you done with CCP?

Who are you and what have you done with CCP?

I’m thinking I like CCP Aurora. Her priorities are in the right place.

Issue resurfaced today, ccplease fix! Haven’t been able to log in at all today. 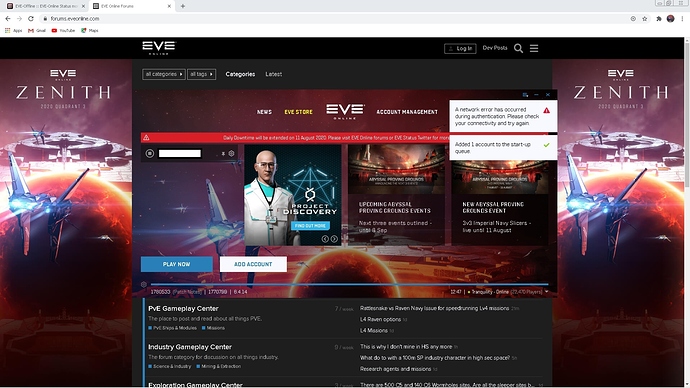 That’s all I get. I can’t access the Help Center either. Everything else (World of Tanks, browser, etc) works.

update: after three days of a big fat nothing from CCP, I was inspired. I installed a VPN. now it works. Mostly. I get random disconnects now, but meh. Better than not being able to get on at all.

If your computer and/or router allows you to, try flushing your DNS cache - it may be trying to route through a bad node that is causing communication issues.

tried that, didn’t work. Even had my ISP give me a new IP, that didn’t work either. Looks like something is seriously broken on the DNS blacklist.

Ban the Dots! The END is Nigh!

Confirmed that there is an issue when launching. You can still access your account via web portal. Have suggested that this is posted on Twitter whilst it is being worked on.

Same here. I can’t login and the problems are the same like three weeks ago.
Will this Sunday be EVE-free?

Cant log in atm and any update on the random disconnects, ccp just gets better and better

Kick the hampsters harder. Jokes aside, were I to lose stuff due to the disconnect, is that reimbursable? Had a blingy Nestor and some rather costly drones out in the field.

I have only now seen that this is the official thread. I have already written on another thread about that: I cannot log in with my account omega and alpha

Thanks for reports. Let’s move the conversation into the main thread about today’s issues. Thank you.