Let us say I buy a 460m sp character in the character bazaar. What would be the best secondary character on another account to compliment my first character with 460m sp

I just want to know how to break down what I need from 2 accounts that compliment each other to maintain safety going through space, and the best dual boxing setups for 2 accounts.

Do you mean hauling safely or you mean like exploring and ratting? Do you plan to operate in hisec or low or null or w-space? What else you plan to do with your characters (like trade, industry, mining and such)? To provide a proper answer much more details are needed.

That question is overly broad, and almost impossible to answer. You also don’t give any background information for you, or any details of your goals.

Are you new to EVE? If so first I would stick with one character for now. And while it may have 460m SP I would pretend it is new. Fly cheap ships and learn the game. Unlike other MMO’s the amount of SP your character has is largely inconsequential compared to the skill of the player at the keyboard. Yes a high SP character can fly more ships, but without knowledge of the game you will just end up as an embarrasing killmail of a multi billion dual tanked marauder for example. 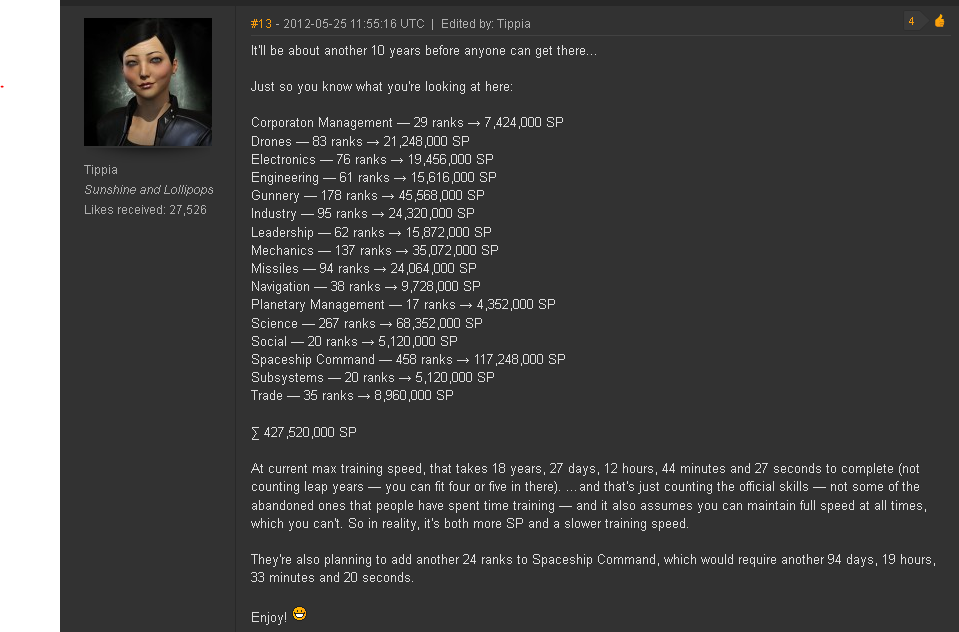 Where is that from?

Well yea I know that, and maybe the old forums, since it looks to be from 2012 (I don’t remember when the old forums were shut down). Do you have a link to the thread? I was curious about it in context but didn’t find it.

Nice, kudos to finding that or remembering it existed to go grab it.

I miss Tippia so I bookmark her posts so I can pretend Im speaking to her again.

Except for injectors, which some ISK rich people used to boost their SP.

Can’t believe that any such characters would be in any way affordable on the bazaar.

Wait, I come and go from the forums so I hadn’t noticed. What happened to Tippia? It is a shame, always good content

Some people were dicks to her so she left, was what Id heard.

And honestly IMO a total waste. I would rather have multiple characters specialized into different aspects of the game than one with all of the skills. Why have your PVP combat pilot who is off somewhere also be your industry expert that needs to be near the production station?

Why have your PVP combat pilot who is off somewhere also be your industry expert that needs to be near the production station?

Oh, you’ve seen my skill list! It’s all over the place.

I want to mine, haul, go on roaming runs, and basically do whatever it takes to augment my main high sp character in all the different ways eve can be played.

That’s almost impossible to answer. Each of the aspects you mention can be complemented in various ways. You’d need a very versatile secondary character with (sticking my neck out here) something in the range of at least 100M sp in all skill categories ?

How new are you to eve?