"Losing" standings with corps and faction after regular missions and storyline

Well, technically not losing 100% of the standing I expected to gain, but I see that anytime I finish a regular mission or a storyline, I lose standings with the corps/faction from the previous missions/storyline. So, I was wondering what was the f ?

For the record, I have all my social skills to level 5, with the exception of Criminal Connexion and Fast Talk.

Another example, which is probably easier to track, is an Epic Arc faction standing gain that is not as much as I would have expected. I chose a track that would give me 5% standing with Minmatar (or 0.5, adjusted to 0.625 with skills).
Just before completing the mission I have 3.85 with Minmatar Republic, and after the mission I “only” have 4.24 (an increase of only 0.39), as the game is pretending I only had 3.61 before completing the Epic Arc.

Before clicking Complete Mission I see 3.85 with Minmatar 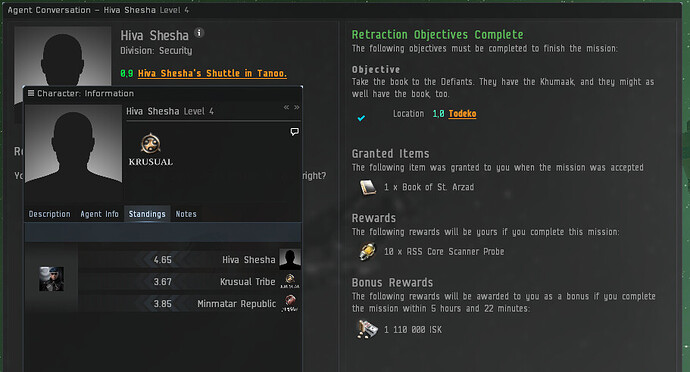 Can anyone make sense of this ?
Did I wasted days of Omega time training my social skills ?

Note : the example shown from the career agent is on Tranquility, and the example with the Epic Arc is from Singularity, as I was using the Epic Arc as a bench test for a battleship fit, considering the update. But I want to emphasized that I was noticing this behavior on Tranquility for months and months, and I’m just tired of this s**t. So this is not something new with the latest update.

The calculations are messed up and always have been. @Geo_Eclipse_Oksaras might be able to say more.

The graph was coded by a lazy dev who didn’t take into account the diminishing returns of standings.
You’ve probably noticed already that you get less standings per mission the closer you are to 10.0, so that there is no way to ever reach 10.0. As you get closer you go slower and slower.

so imagine you are already at 9.99 and then you do enough missions to fill the chart, at the end of them, you will still be at 9.99, no change (though you could look at api to get more decimals and see a tiny change). However the graph will not take this into account. it will just subtract the raw value of each mission from your current standings and tell you that 16 missions ago you were at -2.0 or something.

The gains are based on how far you are away from 10. Thus the closer you get to 10 (as Cutecumber Roll said) the smaller the gains are… diminishing gains.

A simple way to think of the maths is this:
Gains calc is based on: 10 - Currrent Standings

Also Note: The previous/historical standings shown on the graph are bugged and incorrect. Don’t look at them. It just gives a graphical idea of how you are progressing and helps to see which missions give better standings.

However, the percentages and new final standings are calculated correctly.

Gains calc is based on: 10 - Currrent Standings

Alright, thanks. I think your calculation make sense of the final number I get. But CCP screw up big time by manipulating the previous standing values.

But CCP has to stop the madness of updating the previous values. It’s just confusing and can be frustrating for a newish player.

it will just subtract the raw value of each mission from your current standings and tell you that 16 missions ago you were at -2.0 or something

Thanks, I was really upset by that. True, for one corp I have 8.8, but the game claim I was at -2.4 about 6 weeks ago, which is obviously false.

It has been one of the long lived and annoying bugs in Eve that makes things confusing.

I see @CCP_TrashMob takes note of bugs reported in some of the other forum theads. So maybe if we poke him here with a message he will be made aware of it.

The other option is filing a bug report. (Just don’t hold you breath… because they will get to it soon …

The bug you’re encountering is that the ‘new’ standings window is broken and always has been, and it makes up whatever it feels like. I used to have a screenshot floating around of how it said I was at -18 to Caldari State (which is technically impossible). 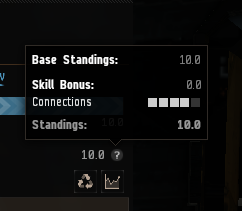 Eve rounds numbers when it shows them onscreen, so they appear to be 10 when they are a fraction lower.

If you want to see the true numbers you have to export the data by using other tools like the Eve swagger interface.

From what I can see it seems that +9.999999999 is the highest it can go with normal standings gains. At that point all gain calculations end up with numbers that are too small for Eve and become 0, so you effectively can’t increase standings any further.

(Curiously there is 1 agent that has true +10 standings towards me - but he does not appear on my list of standings ingame - and searching for his name does not work - so I’m guessing he is not ingame anymore and had a special purpose?

so I’m guessing he is not ingame anymore and had a special purpose?

some agents are in game but not published. Like, concord agents.

Yeah dude I have that too, but if you pull the data off API it isn’t actually 10.0. Also with in game broker fees calculation it uses the other digits.