I don’t know whether this is a bug or not so posting here. I did sister epic arc just now and as you see from first screenshot my standing with Caldari was at 5.73 some time before finishing final mission, after i finished it, my standing just dropped to 5.27 and then increased to 6.07. So, actually my standing to Caldari State increased merely by 0.34 and not by 0.805 as shown in the table, is it a bug and should i file a ticked or everything working as intended? 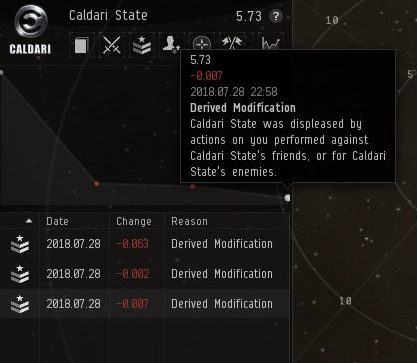 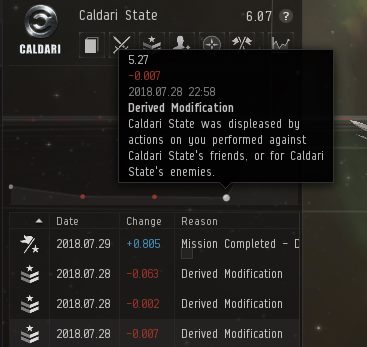 If you completed any storyline missions during the arc, they will influence your standings. Missions completed for Gallente or Minmatar will lower your Caldari standing.

Ah, i understand now. So it’s the percentage that’s shown in the table. Thanks for the answer.

with past standings transactions the client does some real lazy math and any previous standings values should be taken as a guideline and not your actual standing history. 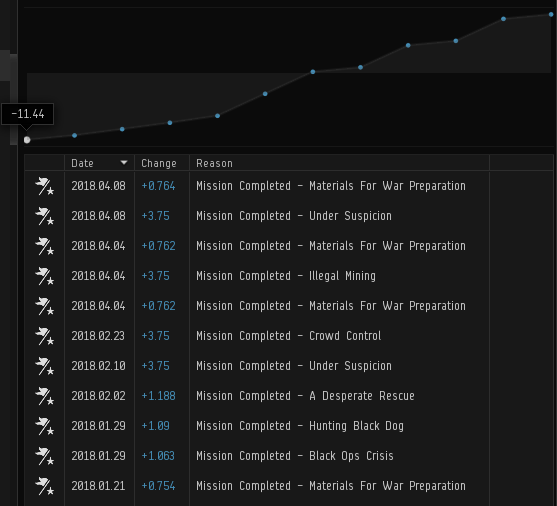 I’m in the middle of this too and I see the same discrepancies as you, Chainsaw. I turned in a few of the same tags with two different characters, and they each reported the exact same increase for each mission, though their beginning standings were different. After recording the numbers for a few of these I notice that hovering over the history shows numbers in between all the actuals… when you hover over the blue dots the numbers that show up were never correct at any point in your pilots history.

This is both pilots after a few Amarr turn-in missions:

And both pilots’ derived standings with Caldari

Caldari derived standings should cap out at +7 unmodified from amarr. Given the one is at 6.63 and getting derived standings and the other is at 7.78 that looks like it checks out. And on the negative side I believe minmatar will cap at -5, and gallente at -2.

If you look at the faction info there will be a table of that faction’s standings. You can use that to see where the derived standings will cap.