After several successful days with low-sec ratting I lost my ship. I believed my Executioner was fitted perfectly for the task but I was wrong. This Mordu Special Warfare Commander could not be damaged and kept me from warping out. 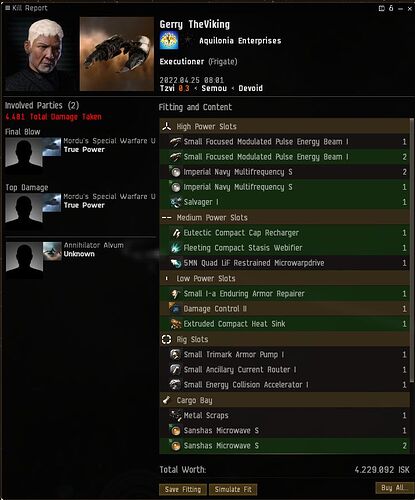 After checking some informations I now know, it was crazy to attack such a ship with a Executioner… 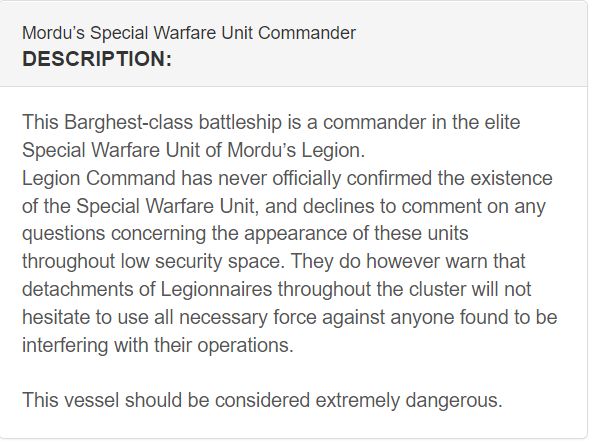 If you focus your fit you can solo the Frigate and Cruiser sized ones in a T1 Frigate. The main risk is being pointed by them and have someone else drop in on you. Rewards are very worth it though!

[quote=“Marta Joringer, post:4, topic:359870, username:Marta_Joringer”]
If you focus your fit you can solo the Frigate and Cruiser sized ones in a T1 Frigate [/quote]

Thank you, I did that and was very successful until I encountered that “special” rat. I watched a video at Youtube on how to successfully attack a rat BS with a frigate.

While its possible to take on NPC battleships in a frigate by getting under their guns, these Mordu’s Legion rats are much more difficult than your belt/site rats. It would be extremely hard to do enough damage to break his tank in a T1 frigate. Id personally avoid the battleship in particular without a bit more firepower.