Two weeks ago I scooped 5 ‘augmented’ type drones each priced ~50M ISKs. Don’t you think owner would be VERY glad to return them when realized (s)he left it somewhere where not borrkmarked?

Don’t you think that for me scooping it (yep, I was really happy and sold it all afterall) would be good to have a choice - to sell it @market or ‘sell it’ to former owner (receiving some reward for finding it and returning it to owner?). I think everyone would be happy about returning by someone a more then 250M priced drones for even a half price (I would be happy to receive 125M and former drones owner would become my friend also)? Or you can assure me that’s a such rare case when drones become left in space while even not realizing by owner they are there and not in a drone bay?

Now I CAN NOT see who is (former) owner of the drones which are in space.
And want it to be SEEN by me as game mechanics obviously have and check such drone information.
Only I ask - is to SHOW it (as container/wrecks time to expire).
Bad idea? don’t think so.

Official CCP “Little Things / Small Quality of Life Suggestions” thread to post the idea there. You can even link this thread there.

First good post ever from you here. How can I link it there?

opposed this idea as giving free intel for no cost or risk .
you don’t want to return friendly player’s drone . they are enemy player and you want to see who it is . for free no effort .
wreck and jet can last 2 hrs. no longer , putting a timer on them would let you see the exact time your enemy was in system . for free no effort .
don’t ■■■■■■■■ us you some nice guy wanting to give friend back his drones plz…

Hmmm… Hope you don’t hate your mom so much as you do about me somewhy.
When drone is marked as “friendly” (first post image) how it can be an enemy?
Think before posting please.

About timer - that’s really controversial proposition that’s why I repeat it “would be good to be showed.” and not “have to” as I insist about drone’s owner.

I see you read just 1-st post )
read this one (right about returning a drones):

Two weeks ago I scooped 5 ‘augmented’ type drones each priced ~50M ISKs. Don’t you think owner would be VERY glad to return them when realized (s)he left it somewhere where not borrkmarked? Don’t you think that for me scooping it (yep, I was really happy and sold it all afterall) would be good to have a choice - to sell it @market or ‘sell it’ to former owner (receiving some reward for finding it and returning it to owner?). I think everyone would be happy about returning by someone a more then…

i do not hate you , we play the same game together .
your post and picture mean nothing with regard to what i say .
you could use this for free intel as i said . read my post and think .
not everyone in eve is so kind like you .

opposed this idea as giving free intel for no cost or risk .
you don’t want to return friendly player’s drone . they are enemy player and you want to see who it is . for free no effort .

I don’t need to know ‘who is it’ I know pirates scattered that drones along lowsec to spam space and overview for all incoming capsuleers for them to lose time before realizing they trapped and reacting respectively.
I don’t really interested about who made a trap (when I already there) 'cause if I will be killed I will know it for sure from killmail. If not - I’ll not interested at all (or I will see who was shooting me from gamelog). So your ‘charges’ about ‘I just want to know… with no effort’ is ridiculous.

But there’s huge amount of situations when drones are there ‘just like that’ and not because someone made a trap. Still telling you - stop hate anything. That’s not fruitful.

About cans - I undesrstood everything right. And answered you.

So… What is your last post about? If telling about I’m a kind person - thank you ) I am.

I’m kind. And I want it to be productive in the game. And if someone’s aspirations in the game is so perverted… I don’t think I have to think about how someone (with perverted wishes) think and (that’s why) do not ask developers to embody a function I can express my kindness with.

If so - why not to ask for pirates who ganking in highsecs be blown i a second with some ‘inside-ship’ mechanism while even scratching someone’s ship (for they even have no opportunity to kill anyone even if they are on dreadnaught there… because will be blown momentarily with inside-ship reactor)? That would be nice and would push out all gankers outside of WHOLE highsec to where they have to be - lowsec/nullsec only.

But I not asking that.
Only I ask - to show a drone’s owner. and (good to be) an expiration timer (not from view of ‘when someone was there’ but from view to see if it’s a trap or some random container there’s in space and, for sure - do I have time to fly for my industrial to take it or it will dissappear till then and better to get something valuable from container right now with current ship’s cargohold only).

The existing mechanic allows you to see what corporation the drone’s owner is in, and that’s probably sufficient.

Be a good drone parent and remember to recall your drones before you warp out.

So… What is your last post about? If telling about I’m a kind person - thank you ) I am.

Did you try it before writing it? No

And maybe you wont write just to write and post some example where you see such information present?

Archer. I really don’t see ANY benefits from your messages. Could you please write something useful or be silent.

OMG, So much words

Are you really ok? Visit a doctor, pal. I think you have to talk to someone about your life. Drones. Drones. Pilot’s name, Container’s expire time. Write about it or be silent. Please?

btw. That’s not a suggestion. That’s imho you have to write about here.

Archer is just a muff speaker, who even don’t try to understand a problem and just through a numerous words he even can’t understand… So, if you like his posts - ok. don’t try to let me like it - I won’t because it’s useless.

Don’t write about what is feasible and literally dumb. As Archer Do. Please. Or you’r his clone and love him so much 'cause of that? $)))

Wat? Where? Show an example.

Hmm… Let me imagine your day:

So much passive aggressiveness

Yep, really. So much of it in that words )))
Visit a doctor, pal. Your mask obviously does not help you.

Wat? Where? Show an example. 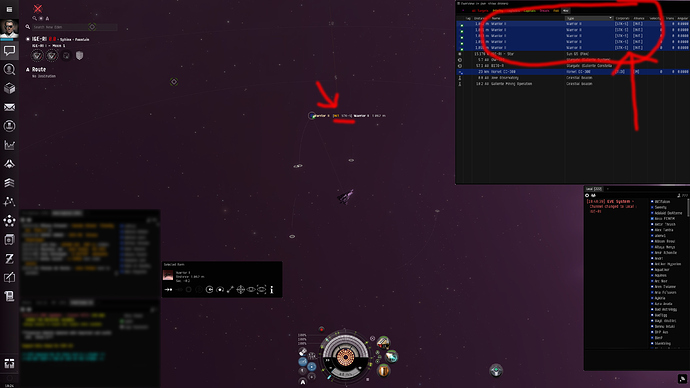 And what’s that (@image) corporation’s name? Where can I see it?

Even if I’ll find have I ask a whole corporation (especially if it’s NPC where huge amount of players and no any head) about whose that drones? Did you read an initial post what for do I need that info (whose exaclty are that drones)?

And what’s usefulness of ‘cororation abbrevation’ info? That it’s ‘friendly’? I know it from the star at the left of drone’s name @overview.

Point is to KNOW EXACTLY as you know WHOSE A SHIP OWNED EXACLY WITH and so on.

Or (to be fair) let’s obsolete an player info at ship’s information for ganker’s even do not see who they attack but ‘just see a corporation abbreviaton’ and no any player name… Why not?

I think that (just some ‘signs’ without exact info on drones) is NOT ENOUGH.

What display you are playing with? ))

You can plug that abbreviation into Zkillboard, DOTLAN or EVEWho and get the alliance or corp full name in a second. If the drones were left from a PvP fight, you can probably find out who they belong to just by correlating the wreck or the system with the corp on Zkillboard.

There’s enough information available if you know where to look. I don’t think it would be a good use of resources to do what you’re asking given what’s available already.

Ahh… Also I can scoop all eve database to excel-file and read it there… And play to eve with calculator (as it just a database with network requests from game-client) but WHY?
Everything have to be INSIDE a GAME interface, don’t you think? )
I still want it to be… As if it possible why it’s still not here?

And… I don’t have 3 monitors… even my one is 2k only ) And I have no so many place for not needed information my overview is about… 100 pixels wide - there’s just velocities and today I suppressed a ‘name’ column widing a ‘type’ column instead - I just have no place to place that ‘corporation’ column (and why? if there’s a drone/ship/item “show info” window exists where I can see it. At least I want to see it there).