Make Ganking/Criminal Activity Illegal in HS Plus other Complaints

I have a list of complaints that have been spoiling my enjoyment within EVEonline.

I therefore propose the following;

CONCORD doesn’t protect, their job is to punish.
Everything CODE. Does, as much as you hate it, is within the games rules.

There is little or no protection from concord for HS miners mission runners or those ratting in combat anomily sites aginst criminals gankers etc that descend upon capsuleers.

Not meant to be.

The resecent disruption to both ORE and ICE mining in HS has had a detrimental affect on those who get pleasure from such activities. This also has an effect on the amount of isk that can be gained from such activities which to some of us is impotant and vital to our continued existance within EVE.

Eve players have been too productive. This is why CCP are dialling back rewards and thinking of ways to up destruction.

If ganking has been affecting player productivity, this is a good thing. This is what we need.

Increased activity from CODE and other criminals are persistenlty invading HS systems and using extortion as a way to force players avoiding being ganked and at times being podded as well.

Part and parcel of eve. This is the kind of game where you can threaten and extort other players. As long as it’s all done in game and doesn’t become harassment by CCP’s terms.

do nothing to discourage this and constantly reply witht he words " it’s a sandbox game" as if that justifies real life criminal actions within a game. Either way ther have to be rules and any breaking of these must be met with severe consequencies otherwise the game will eventually die because the fun will die and no one will want to play this game anymore.

Criminal behaviour like murder, theft and such are not ‘real life criminal actions’ when committed in a game. Especially a game that is designed to allow such actions.

Ganking has been around since eve’s inception. Hisec has never been a safe place. Eve has been dieing since 2003…

Oh man, are we really doing this thread again? I’ve only been playing 8 months or so, so I have to ask the players that have been around for years. Do these come up like once a month? Or more? And to the OP, yeah thats Eve and it won’t and shouldn’t change. All of your complaints are completely manageable inside the game with current mechanics, you just have to work inside the game rather than whining to change a system that’s been in place for 18 years.

Please read this thread to understand the nature of EVE.

Please also take a few minutes to read the EVE Online Support articles for the Crimewatch system especially CONCORD, and the EULA, ToS, and Policies section to understand the allowed gameplay around roleplaying a criminal character.

Welcome to EVE, ganking is part of the game!

Last week I tried CS:GO, it’s ridiculous how they allow real life illegal actions like murdering people with guns in that game…

these threads appear in bursts and appear to be from a bunch of different alts all agreeing with one another about how ganking is killing eve, the threads appearances usually follow on from an expensive loss like for instance a t1 part fitted retriever or an empty pod loss.

He will rage quit soon but the same thread will be restarted again soon by another carebear its like groundhog day.

Without the spice of a potential threat, Hic-Sec becomes utterly boring. I speak as a potential gankee. I’ve expanded on this topic in another thread, if you’re interested look up my comment. 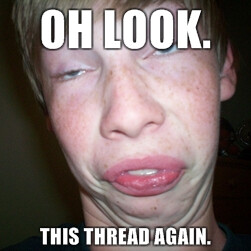 I was initially planning to have some fun with this, but it’s a fairly obvious troll thread, so why bother?

Oh man, are we really doing this thread again? I’ve only been playing 8 months or so, so I have to ask the players that have been around for years. Do these come up like once a month? Or more?

About once or twice a month, yes. And you can easily tell whether it’s a troll thread based on how it’s written. Troll threads usually follow the formula of expressing surprise that CCP has “accidentally overlooked players exploiting the game by being able to kill other players in high-sec all these years,” followed by a bunch of suggestions, which almost always include some form of banning for the “exploiters,” much like this one does.

Real threads can usually be immediately tied to a high-profile loss, and instead of a “helpful suggestion for the developers” tone, they usually just say “I don’t care about the game anymore but CCP should know why I’m quitting.”

I like totes agree. CCP should ban all gankers, allowing AFK miners and lazy carebears to grind isk all day long. Those who grind the most should be rewarded with FREE gametime and additional PLEX, including custom skins and special items. There should be nothing whatsoever to stop them from accumulating additional loot, and elite grinders should receive unique bonus benefits.

Remove all challenge from Highsec!

as if that justifies real life criminal actions within a game

It only took him a year to reply to the gank, now that’s really afk.

Its already illegel in high sec but new risk is needed for the ganker career path. They should lose NPC station docking privilege and the use of jump gates until they get they security standing back up.

They should get ganked.