I noticed a memory usage increase after the last few recent patches.

Below is an image of the ingame memory monitor. 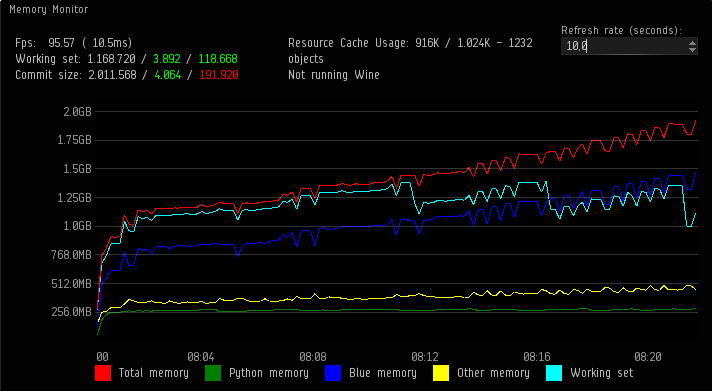 The seen spikes are from undock/dock.

Edit: The ‘working set’ downward spikes likely indicate that data is being written to the pagefile. Which is a lot for one client per hour. 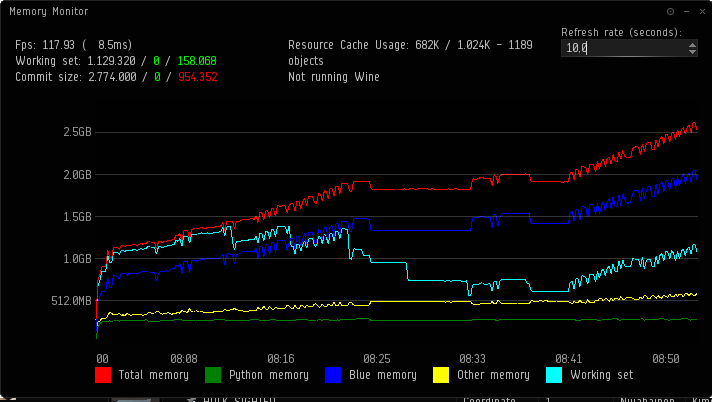 Yes, this is a very annoying thing.
This started happening with the last large update.My best bet is on the changes to the rendering engine.
After an hour of jumping and docking, both manually and autopilot, the client starts using notably more memory.
To the extreme, a couple of days ago, I had to do several runs from Jita deep into Minmatar space to haul some things and after 4 or 5 runs of that, the client started behaving weirdly, even having graphic glitches.When I had a look at it, it was using around 3.7GB of memory, so I guess the 32bit private virtual memory address space was reached…
Would be pretty nice if someone could give this its deserved attention as it will not go away by itself.
Thanks!

Hm. That would explain many issues.

I tested this and you can just stay out of Jita 4-4 and dock/undock and after doing so several times you’ll see the EVE client using abnormally increasing resources.

Thank you for the responses. I tested again and the issue still persists unfortunately.

Could at least anybody from CCP acknowledge the presence of this?
It’s not like it’s hard to reproduce or that it’s something that doesn’t matter.

I’m now Having problem too… started 24-72hrs ago (never really had problems). Win8.1. Multiple clients (up to 3). 16Gb system, Nvidia 970GTX. Changing graphic settings from min/max may affect it, but not that much (it definetly does not de-allocate any memory according to Task mgr).

Could at least anybody from CCP acknowledge the presence of this?

You may have more luck posting this on Reddit. Pretty much the only CCP response you’ll get on these forums is related to Falcon’s forum moderation.

Also, if you haven’t already, might want to submit a bug report.

Seems to have gotten better over the past few days. My symptoms have improved or been eliminated. Hopefully stays that way.

It was probably your game play.
The issue couldn’t have been solved a few days ago, since there was no patch in between.
Also, the last expansion and its further patches did not address it.
CCP is probably having more pressing issues, like reactivating the tutorial for all accounts.