Would it be possible to have the images in the post collapsed by default, so we don’t have to scroll through the ones we’re not interested in? 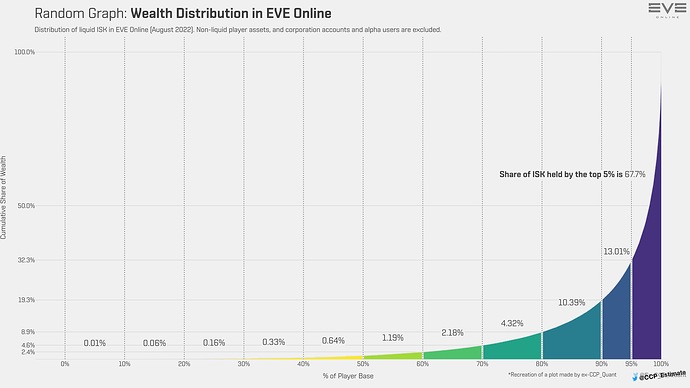 Any chance we can get an updated version of this, as well as a version for PLEX, and one for assets? Because this was a great graph, and it’d be really interesting to see if there’s a measurable Δ/T, and how it compares through the 3 types of wealth.

@CCP_Bee if you can ask Estimate to just look in on this post (no need to comment, just so he’s aware of the request and can consider it) that’d be awesome.

Also! If you have any other random graphs you’d like to throw at us, please do so. Whatever numbers catch your fancy that month! Never know what’ll be useful.

Hey Arrendis,
Sorry for the late reply - I’ll take a look at this and see what we can do, maybe we can have another random graph of the month in the January MER

@CCP_Estimate
There are issues in the MER kill dump

Awesome, ty! And no worries on the delay, busy people gonna be busy.

Hi @CCP_Bee, in the MER data would it be possible the have the kill ID added to the kill dumps? This would make it much easier to match data with killboards when analizing kill statistics. Ideally all kills would have kill hashes too but I understand there’s still some hesistation on providing all kill data without having to go through zkillboard.