I found out there is not much movie reviews here, quite surprising, knowing there is such a thriving movie industry in New Eden.
I will start, with something quite recent. 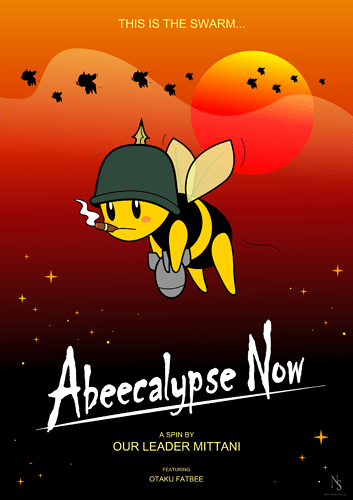 Abeecalypse Now is an GSF Studio animation and is one of the most popular movies in Empire. This movie focuses on a FatBee and his friends, as they rescue their home in Delve time and time again from the enemies.
It is the height of the war in Delve, and FatBee is sent to carry out a mission that, officially, ‘does not exist - nor will it ever exist’. The mission: To seek out a traitor Commander Dino, whose pack has crossed the border into Delve and is conducting hit-and-run missions against Delve Swarm. The FatBee job is to eliminate him.

It has an interesting story, just a small FatBee and his friends that want to protect their own home and swarm from total destruction. Yes the propaganda and the violence is too much and it kinda has a bad taste, some scenes will really tear you up… especially when FatBee thinks about his younger brother NewBee. The design of the characters, the quality, the animation, the crystal clear voice acting and the music itself is fantastic for a studio that have such an awful reputation. Can’t wait for Abeecalypse Now 2!

Has someone else red this ABeerCalypse Now or is it just my twisted Amarrian psyche?

Really Nana, i thought you had better taste than this…