Munching of Turnur Star has Begun 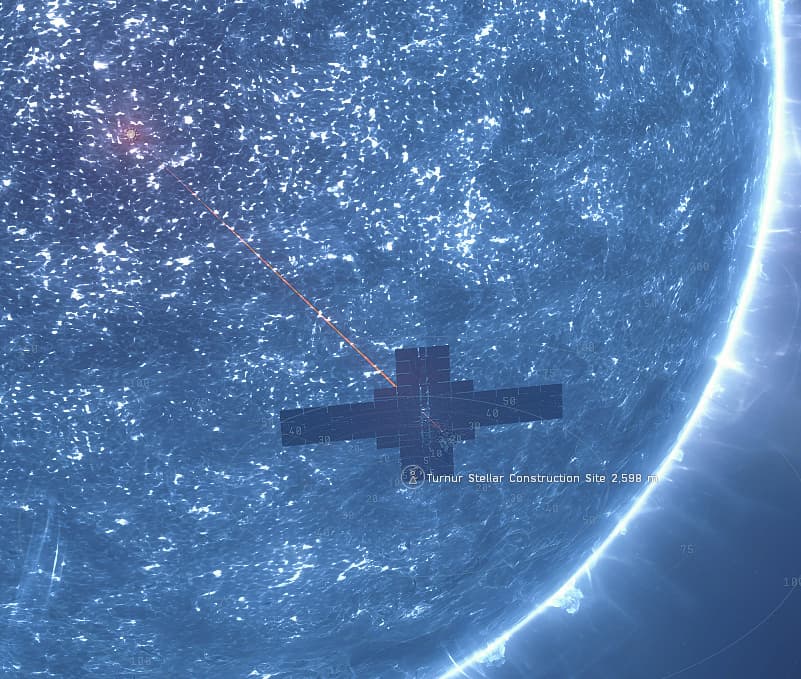 Are you really launching a system in the abyssal dimension of Pochven? Independently from which side you are, what’s the point of find a way to escalate a second Triglavian invasion?

There’s little to suggest that these efforts, regardless of who’s performing them, would result in a system’s local spacetime topology changing in the same way the systems of Pochven did @Kalodote_Lafisques.

Pochven, so far as we can determine, was purposefully woven in an interstellar-scale re-weaving of spacetime through the specific alteration, and then apparent anchoring, of stars through the “transmutation” of “porevitium” within and without - that is to say, the hypothesized use of Isogen-5 in altering spacetime.

In the case of these prototypes, I highly doubt similar effects could be seen - after all, these are experimental, and are intended specifically to unveil some of the intricacies of the Triglavian Collective’s highly invasive method of stellar harvesting (as opposed to any surface-level harvest operations the Empires have previously been capable of conducting).

Where this will go is unknown, but it seems safe to bet that we won’t see any more stars plunged into deep, dark deadspace.

And nobody cared about all the people that are living there?

Alas, Turnur contains only Gas planets and one Barren planet, so there are unlikely to be many deaths. But Egmar and Vard contain Temperate planets, and God will be glorified in the destruction of the Minmatar there. For as Minmatar they share in the collective guilt of the Minmatar Rebellion and their lives are forfeit. Amen. Amarr Victor.

Worry not, the Amarr care little for human life.
Look how they abandoned their people in Raravoss and Niraja after we liberated them from the tyrannical rule of the throne.

That’s an interesting conclusion; use a wider data sample and try again.

Do you know there can be some colonies orbiting Gas and barren planets and their proper moons? And aren’t you worrying about casualities because “there are unlikely to be many deaths”?

Wow, this being thought that “Death of single is a tragedy; Death of many is statistics” was a Caldari-Gallente issue, not Amarrian.

And aren’t you worrying about casualities because “there are unlikely to be many deaths”?

If you think Mr. Nauplius is worried about casualties, Mr. Lafisques, you don’t know him very well. He’s made his god in his own image, so it’s a vindictive, bloodthirsty thing that hasn’t at all gotten over the Minmatar Rebellion.

If he’s worrying about casualties, he’s definitely worried about whether there will be enough.

He does breed a fine stout yak, though.

This being knows him very well and the fact he’s aware about what he’s saying ridicules all we capsuleers and the Intergalactic Summit. Which organization have permitted a similar subject to take a Capsuleer course, license and generation process?

So … I don’t know this for sure? But my impression is that he got licensed before he started following his own nose directly around several bends.

a vindictive, bloodthirsty thing that hasn’t at all gotten over the Minmatar Rebellion

The Amarr God will never “get over” the Minmatar Rebellion. It was the greatest treachery in all of history, and the Minmatar will pay for it with their own blood. With interest. And God charges a most usurious interest rate.

Have you noticed that you and your god seem to agree a lot? What was that line from the Record? …

“[Y]ou’ll tell yourself you’re a Chosen one, even a prophet. Your every prejudice, instead of being examined, tested, and set aside as unworthy, will be enshrined as holy writ. You’ll remake your god in your own image, and your imagined god will not hear or answer you however you howl—but you’ll tell yourself that he does!”

Seems to be pretty strongly in effect for a supposedly broken curse.

Well, if this heretic is not the IGS representative we Amarr want, it certainly is the one we deserve for not speaking up and drowning it out. I have been rather busy making sure these devices are secure, so thank you for taking the time, Vesper.

Only the ENTIRELY LEGITIMATELY OCCUPIED Throne can make claim as to the intended effect and justice of this act, but I must admit the irony of it all is poetic - perhaps divine, even. Something to meditate upon.

Wow, this being thought that “Death of single is a tragedy; Death of many is statistics” was a Caldari-Gallente issue, not Amarrian.

I would say it’s more:

The death of a single apostate is justice being done; but the death of millions of apostates is cause for celebration.

I must admit the irony of it all is poetic - perhaps divine, even.

When invaded by the Triglavians, your systems were saved in part by Minmatar. And so your people repay that kindness with evil and malice.

And you call this ‘divine’.

It is true that this is a disturbing quotation, but I must have faith in the power of Morgana’s de-cursing abilities.

Quid pro quo would be nice. But reality is not so kind.

What were the Minmatar expecting? An equal act if kindness?

I’m not at all sure why you must, aside from that you want to.

Which of course you would, wouldn’t you?