I have just jumped into Eve using a mac with the Mac keyboard and a gaming Mouse.
These have served me ok in WOW for many Years albeit the keyboard takes some getting used to for a MMO like WOW.

I am so impressed with Eve, all those screens of info is a dream for a nerd like me…

My question is what do you guys & gals use to control Eve? is it Keyboard/Mouse only or do some players use a Joystick or other controller?

Is voice chat common in Eve? I have Discord loaded but can load up any chat system if there is a standard.

Thanks for any advice

Mouse and Keyboard is the preferred method, I think. It doesn’t really support joystick; you can’t actually configure joystick specifics (axes, buttons) in the game’s control panel. And the ships are turret ships that shoot in all directions, so the ability to “look around” with the camera is important. Game isn’t a dogfight game; you order your ship (like a captain) to approach, orbit, warp-to, or otherwise navigate itself to your target or other points of interest, you lock targets, and you activate weapon systems, shield/armor systems, electronic jamming, etc., with the computer actually doing the aiming and the hitting.

Voice chat is common; the game has its own voice-chat embedded into the (text) chat channels, but of course that has the disadvantage that if the game crashes you also lose the chat. So most player corps use voice chat; Discord is popular, also Mumble, TeamSpeak. You usually get details once you join a group.

EDIT: EVE doesn’t allow user interface add-ons or script macros (like WoW); you will get banned if you use any bot, script, macro, or program to automate things. AND, when you open the game for the first time, the user interface isn’t arranged in the best possible configuration. So you should spend some time to enlarge that Overview so you can see details, and reposition the various windows as you see fit. Hit ESC to access the EVE Control Panel and look at the options there, esp. keyboard shortcuts.

Thanks for the info Memphis, I was wondering if eventually I would be flying around dogfighting but you have confirmed what I suspected that it is about making decisions and managing control panels rather than “flying”
That suits me very well as I am much more comfortable with that sort of control.

I have been an ardent pvper in Wow but I was always a ‘clicker’ and not a ‘keybinder’ which all the most succesful pvpers are.

Thanks for the heads up on the macros and third party addons.

Use the keyboard shortcuts, you will be glad you do. Not just for pvp, either.

I find the radial menu to be useful, too…especially when I want to use one hand to stuff food or drink in my face whilst travelling in new eden.

Ye, thanks Vortexo.
I have the standard Mac keyboard which as we all know is tiny…
So I am looking at alternatives, something beefy enough for Eve but also not too intrusive.
I have seen a Logitech G413 (Sliver) which looks like to might do. 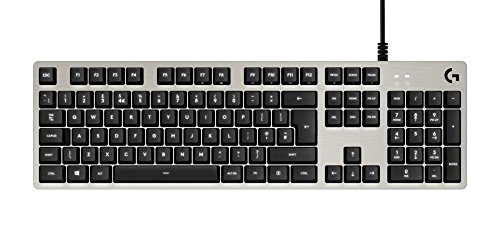 Logitech used to have nice programmable keyboards (I have the G510), but they moved away from programmable and towards “mechanical”, and they replaced the “programmable” with a gaming pad that’s programmable. Because of the no-bot rules, you can use a programmable gaming pad, but only to save yourself the bother of pressing ctrl-alt-shift-x and other such finger-breaking combinations.

Basically, if it takes a “regular person” playing on a “regular keyboard” two or more clicks or key presses to do something, you can’t shrink it to one. Combinations of ctrl-alt-shift- etc. are considered a single key press though, and you can put that in a button.

You can never fully control EVE. The best you can hope for is to lay down and pray that they will go easy on your corpse after theyre through with you.

I used to run Mac Book Pro and did play EVE on that.
I had also used a Windows 7 partition that I created/loaded to also be use that.
So if you were to run a Windows partition, perhaps you will enjoy that idea.

I wish I had a mouse with hot keys to program like drones in and out and a couple other hot keys I keep forgetting.

It’s much more important to have a large screen or even multiple screens. You will have a lot of info you need to process quickly. Also it’s a good idea to get a different overview rather than the standard one.

Fighting in EVE is not a matter of fast reactions or DPS rotation like in WoW, it’s more about preparation and teamwork; the fight itself can be relatively slow. Manual maneuvering is more about doubleclick in space rather than WASD; you are J T Kirk and issue commands, not Hikaru Sulu piloting the ship.

About voicechat, no one uses ingame voicechat, we usually use teamspeak, mumble, rarely if any Discord. Discord is actually used for text chat rather than voice chat.