Other than M-OEE8, perhaps you should do some more /moveme locations into areas in Delve, Curse, Etherium Reach, so you won’t have to constantly travel such long distances. In terms of those wanting to fight NPCs, Guristas and Serpentis are OK.

These are the locations/regions I was suggesting or the systems adjacent to it.
Delve (Blood Raiders)
Etherium Reach (Rogue Drones)
Curse (Angel Cartel)

I encountered my first NPC Titan today instead of a dreadnought
Proof: 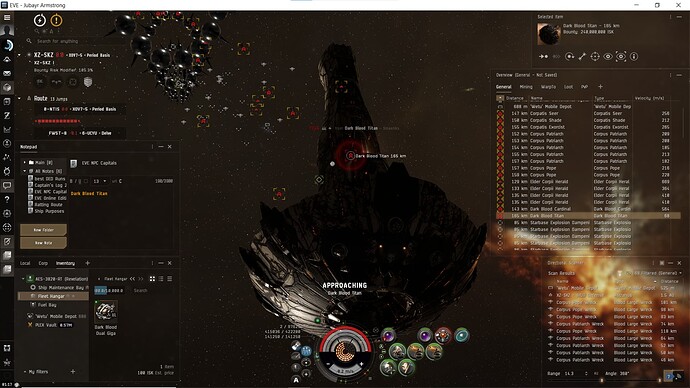 I hope you can take my idea into consideration

Test server not for your tests.

CCP Games runs a test server, called Singularity, in order to test drive changes, fixes, new features and gather community feedback. Its primary function is to provide a test environment as close a...

P.S: I have spoken to some other players on the test server and they are wishing to see this in effect

If CCP has a need for players to do testing in additional locations, they will add them.

The server exists for players to assist CCP with testing planned changes; CCP kindly allows it to remain available to players for their own experimentation as well, but that is an unsupported activity and they will not invest their limited dev time to making personal testing more convenient.

If people are wanting to test in Delve, they could just set their home station there and use the pod express to teleport between M-OEE8 and Delve.

M-OEE8 is the only area for pvp on the server.

Devs have locations set up for where they want testing locations to be that they do.

If they wanted to start testing In delve, then they may add an area for that…
But they dont test in delve for mass tests.