There were issues with chat earlier this week. You can find a message about if from CCP Explorer in the ‘No Downtime Discussion Thread’. I suppose the issues are back.

docked to cita in a pod. tried to enter new ship. nothing happened. trying to open my inventory shows only blank pages who appear to be loading foreer. when undocked everything is back to normal - when I dock again inventory is still stuck and not showing anything. entering ship impossible right now.

forward operating base’s seem to not spawned anywhere like normal

Since no downtime occurs, the asteroid belt will not be restored.
After all, Downtime is necessary or remedy should be provided

so i logged in after theoretical DT and went about my normal eve playing going to run a anom, this anom usually takes me 8-10 mins to complete, during this entire time i experienced rubber banding and commands not responding. luckly i had the network data monitor open and as you can see in the pic it was a blcoked call % of 40-50% during this ratting.
Don’t know if it is strictly no DT related or eve just being laggy. 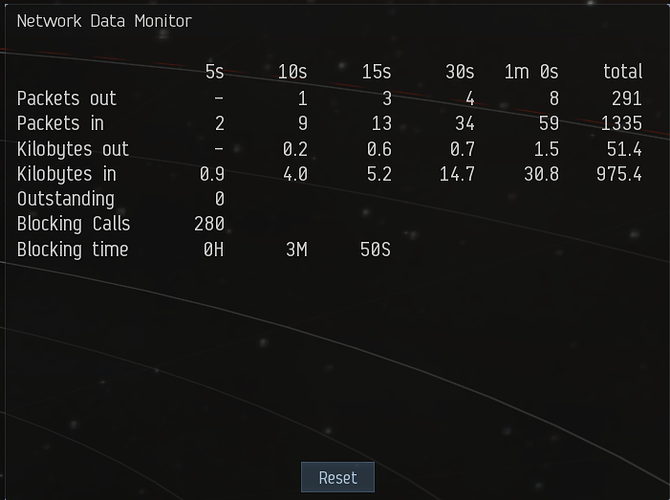 Cherry picking exploration sites is now worse than before because they do not replenish after DT, which means they keep lingering around and block the proper respawn.

Honestly, would prefer a 4 minute down time. It’s a good signal to go to the toilet, take your eyes off the screen and make a cup of tea!

Daily Alpha Injectors did not reset, says another can be activated in “Less Than One Minute”

Is it just me or combat anomalies just stopped respawning?

Maybe just my imagination or bad luck but signatures seem to be spawning at a ridiculous rate. In the last hour 6 new signatures spawned in my constellation where none or maybe 1 had spawned on a regular day.

Definitely not seeing any Emerging Conduits in Amarr space now, but this has happened before.

I have been farming conduits for 3 weeks now and for the first time i didn’t get a re spawn a minute or so later. 15 minutes down and no spawn.

A glitch in the Matrix!

AI from Triglavian emerging ships significantly changed on my Dom drone boat. It doesn’t matter how much I tank them before launching drones now, they will just stop and go after the drones no matter what I seemed to do. They weren’t as aggressive toward the drones previously. This was solo play … Haven’t experimented in buddy fleet ops.

getting a lot of lag, loads of errors with the XMPP service in the log viewer and a 226 blocking calls in 15 minutes.
Ping to servers is 3ms

Local and/or station Guest lists seems to behave strangely. Currently displays 8 people in Local, while 11 people are displayed at the station Guests lists.