You’re reeally racking up those titles, huh?
You are well on your way to becoming a self-aware, better spoken version of Vaari, it seems…

Why would I buy your extendable spice tool and love wand when I already have my very own:

I have already bought myself a replica scarf. It’s very soft!

I just returned from my first wormhole expedition. It was nerve-wracking, especially when I got lost in there, but I also made a massive pile of ISK.

Then prove yourself, Auriga Menkalinan! What are you, coward or killer?

What should I be proving and to whom? 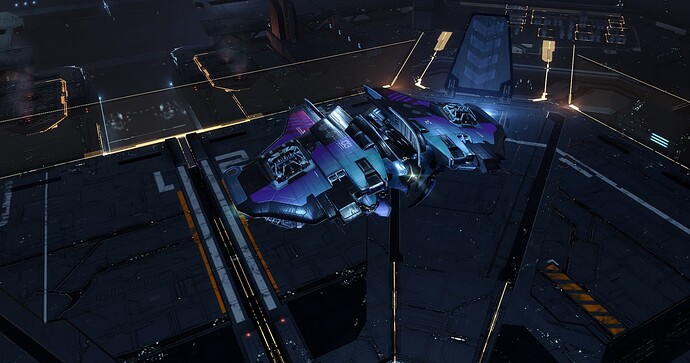 My Nemesis is called “Diana Kim”. Naturally, like any good pilot with experience in Caldari space, “Diana Kim” carries a Guristas ‘Dirty’ Bomb (just in case) and comes supplied with a Caldari Navy Overlay Transponder as standard so you can make others believe you, too, are part of the Caldari Navy. The SKIN is extra garish to highlight the Gallentean excesses I hold dear.

By far, the Heron. Such a versatile little thing. From combat, to exploration.

After that, probably the Merlin, then the Tormentor.

In the Dessie range, the Dragoon and the Confessor.

So far, the Probe. But I’ve only flown the Burst, Probe, Reaper, and Rifter so far.

It’s not a secret that I have a particular affinity towards the Harbinger. My main title in my corporation alludes to not only my being an apostate, but is also as often read as a reference to my skill with lasers.

Historically I’ve also had a special place in my heart for the Abaddon, the Crucifier Navy, and the Coercer.

Now, however, I’ve expanded my horizons and fly a much wider array of ships. I now really quite enjoy the Typhoon, the Navy Osprey, the Bifrost, and the Jackdaw, among other ships.

I’ve recorded kills from over 100 different hulls by now, so picking just a few is difficult.

The Corax. It is a beautiful vessel. Watching her seven rocket batteries unload is to behold a blossom of fire.

For me, it brings back memories of the Navy, and then my early time in the militia. Scrambling to battle stations through cramped hallways. Foreheads and flight jackets sometime stained with sweat, other days men shivering with breath freezing in the void-cold air. The hum of her reactor rocking you to sleep on your turn in the cot. Yes, the only way to live.

Prove the volume of a circular cone of radius r and height h is 1/3 of πr²h.

To the Triglavians. And then they’ll share the secret of the incompressible fluid equations.

You know what, Di-Di, if someone with more of an interest in maths than me can vouch that’s not gibberish, I will have gained a certain level of respect for you today.

It’s correct, although I’d call it a proof sketch rather than a proof. “Show your work,” as the cry of math teachers everywhere goes.

Remembering Where We Come From

a hard job when our kind strip whole systems of their ore deposits less than an hour.

What are you even talking about? The only system I can even name that has had its asteroid deposits majorly depleted would be Jita, and that’s after years and years of consistent strip mining by capsule pilots and baseliners alike. Where have you even seen systems stripped of their ore deposits in less than an hour?

Remembering Where We Come From

I still believe to this day that capsuleer mining is keeping baseliner populations in a state of economic squalor unnecessarily.

Somehow I knew either you or Di-Di would respond to me there, Remi. The thing is, and this is really important so listen closely…

I don’t have to explain myself to you.

So I’m not going to.

You see, you could have been nice or, you know, like a normal person - well, as normal as a capsuleer gets - and, you know, asked a question without trying to attack me in doing so.

Oh, Ange, where were you brought up that systems were stripped of their resources? It’s so sad that your parents were killed in that way. While I don’t agree with your viewpoint, I would love to hear why you think that way…

See? It’s not hard? If even a self-proclaimed idiot who has nothing of much worth beyond vain attempts at humour such as myself can scrabble that together, surely you could have done the same? But no. You chose to respond to a post where I opened up about the most traumatic experience of my life - the moment that changed me into this monster that I have to live with for every day of my immortal existence - by trying to nit-pick factual details from hyperbole.

Take a long look at yourself in the mirror because, for as much I poke and prod at your pal Diana because of some of the horrible things she’s said to and about me in the past, she’s never stooped as low as this.

In other news, my Nemisis is getting a name change.

Somehow I knew either you or Di-Di would respond to me there, Remi.

My name is Remilia.

So I’m not going to.

Way to dodge backing up every single stupid justification you provided the moment someone pointed out its nonsense. It would be vastly more respectable if you just made some shallow statement about targeting miners to “avenge” your parents. Still extremely stupid and just a paper-thin justification for piracy, but still better.

My name is Remilia

Your name is whatever anyone else wants to call you. But cool, you don’t like Rémi. How about ‘Heartless, Callous Scum’ instead?

You want to go about trying to win points on the IGS by picking at what you find to be ‘technically incorrect’? You can lead whatever life you want so go ahead. But don’t expect me to respect you enough to use the name you want me to use until you prove you’re an individual worthy of respect.

I disagree with a lot of people on here on a lot of things. Some people I would say the word hate would be an inadequate discriptor of how I feel about them. But never have I ever mocked the upbringing or history of another person regardless of what I think about them.

You know what? This is why I never open up about stuff like this and why I flood the IGS with mindless jokes that I know no-one cares about. Because the minute you try to provide anything of emotional substance, some idiot decides that this is their moment in the spotlight to shout ‘AHA!’ and wag a finger.

So, Remi, while you keep doing stuff like that, Remi, I, Remi, will call you, Remi, whatever I Remi like. So Remi that in your Remi and Remi it

This is getting embarrassing to even read.

However, you will notice I never even mentioned the circumstances of your orphaning. I don’t particularly care?
My objections were about you parroting blatantly incorrect CODE talking points. Are you really that insecure you have to resort to hiding behind your parents’ corpses to avoid having to confront your involvement with unhinged piratical elements?