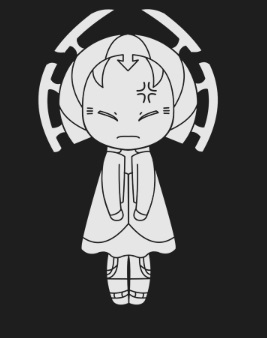 “Old men…That’s what this organization is ran by when you dwell on the thought. Old men that are behind on the times and aren’t rushing to embrace change. Despite bragging about being technological innovators, The Guristas can’t ever seem to be as innovative with their military tactics. Fatal’s death dealt a bigger blow than I once thought, here’s a man that gave the Guristas a formidable and effective playbook, but left nobody capable of improving on it. Instead they continue to use the same fleet load outs and the same complex layouts that Capsuleers have written down and made readily available on the galnet for other Capsuleers to research and use against them… How many more have to die before those in charge realize that the system doesn’t work anymore and is being exploited by Capsuleers day in and day out? How many more ships do we have to lose? How much more tech do we have to HAND over to the Capsuleer markets before innovation finally comes?”

“Dog-tags, Suha. Dog-tags belonging to both standard Guristas and a few Dread Gurista.”

“Where did you get all these from Avio?”

“Yeah… Long story short, Brotherhood of Spacers went around Venal and started ‘cleaning up’ vacated Upwell Structures after the consortium dropped new firmware that creates a ‘abandoned’ state for structures that haven’t seen fuel in awhile. All asset safety protocols are disengaged, so anything stored in the hangers are ejected into space upon destruction… Well, anything that survives the explosion of course… All the loot was collected and stored for an auction. Most of it was just Guristas tech looted from dead space complexes, but among the listed goods were these dog-tags.”

“They tried to profit off of these?!”

“Don’t give them too much ■■■■ Suha, they might not share the same sentimental value you have in them… But at least they considered listing them, thus giving me the opportunity to place bids up for them and grab them for you… Had to overpay a little bit for them all, but did so knowing nobody else in the Alliance was gonna go higher for some pieces of metal with a name on them. The real meat of the auction was all the tech that was recovered.”

“Well… I appreciate this Avio, truly.”

“This tag - Onera Koioki - Dread Guristas, a Captain no less. The tags of captains are made with some special kind of crystal, it’s hollow and transparent - yet durable and reliable…”

“I could contact the agency and have them start digging for a next of kin.”

“Yes do that… But more often or not these people don’t have a next of kin. Many have left behind their families and friends to join the Guristas and start a new life on their terms. Even if we did manage to track down their family, they’ll probably be grateful they were killed for daring to fly for the Guristas… See the Capsuleer that killed them as heroes even.”

“Could still appreciate the closure.”

“Closure only brought me grief and bitterness when I was brought my Fathers tags! For days I cried and days after I fumed in anger at the bastards that took him out… As I’ve got older however, I start to realize something.”

“Is a Capsuleer really to blame for my Father’s death?”

“I only know what you’ve told me Suha.”

“Yes, yes - that’s besides the point… A Capsuleer dealt the killing blow, but is that what really killed him? Was Is not predictability that got him killed?”

“You will in a second… Tell me, how easy would it be for you to find Intel on say… Oh I dunno, something important like a Staging area for Dread Guristas forces?”

“It’s not a hard question Avio… I know you know the answer to this. How easy is it for you to learn exactly what kind of fleet would be defending that kind of base? To learn how the defending fleet will react to the destruction of a certain vessel or structure.”

“A QUICK GALNET SEARCH! THANK YOU!”

“…The Guristas have such a formidable military force… One that could rival the Caldari Navy if they really wanted it to. However the Guristas insist on sticking to tactics that have been compromised by Capsuleers for years now! They’ve learned what kind of ships to use against what and will face zero casualties while they claim the lives of thousands and thousands of Gurista! My father died defending a troop reinvigoration camp… The Capsuleer plowed through them without as much as a scratch because he knew exactly what he was doing, he knew exactly what the defenders were gonna do because their discipline demanded they stick to this outdated and compromised playbook that the Guristas refuse to change. That’s how my Father got killed! That’s how everyone in this ■■■■■■■ pile of dog-tags got killed! Predictable tactics got them killed and all that remains of them now are their tags to be sold by Capsuleers in some ■■■■■■■ auction!”

“… Look, I’m not trying to sound insensitive as I already get the impression this is a serious matter to you. But maybe change is not as easy as you make it out to be… The Guristas is an organization that’s spread out across several regions, in every system of said region almost. That’s a logistical nightmare even for the Big Four Empires, maybe these bases are defended this way as a means to standardize their military capabilities and make logistics that much easier.”

“At what cost? Are we not weakening ourselves by making it so easy for Capsuleers to raid us? There’s no wrench we can toss into their plan to make them panic and cost them their ship?”

“Plenty of Capsuleers still lose their ships to the Guristas Suha.”

“Only when another Capsuleer swoops in to gut them or they’re just plain incompetent at flying… I dream of a military force that kills even the smart ones without the aid of another Capsuleer. I want Capsuleers to fear the Guristas…Right now they laugh at us… right now they slaughter us while watching their favorite holo-vid… It’s an embarrassment.”

“It’s just probably not that easy to fix Suha.”

“Maybe so… I do admit I’m speaking as an armchair General that has never seen the inside of war-room… I do feel as if those in charge have a responsibility to minimize our bodycount and raise there’s in return - I think The Rabbit has that responsibility especially.”

“I agree, and I’m sure they’re trying to figure out something. Just keeping it under wraps to prevent… You know, it showing up on the Galnet for Capsuleers to dig up.”

“One can hope… I thank you again for getting these tags Avio, I’ll see to it that they’re given the respect and care they deserve.”