Phantomite designed a survey to figure out why people are quitting. Naturally, participants will be limited the cross section of guys that quit, but that also are still close enough to the community to hear about it. However, these players might also be more likely to come back than those that have completed severed themselves from the community. So, I don’t think this selection bias is the worst thing in the world. Anyway, I know of at least one person who quit who still visits the forums (@Qia_Kare ). So thought I’d repost it here. And if you’re still in contact with other winners through discord or whatnot, maybe pass the link on to them as well.

Oh, and Phantomite said that he will share the results with the community. 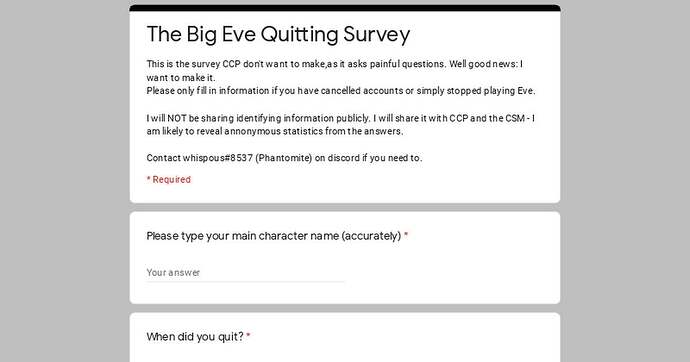 r/Eve - Why have you quit? Let's find out and deliver the results to CCP....

Ok, looked at the survey and it is a good start, but it is missing basic items like the effect on ship loss or scamming or any number of normal events that happen in EVE, but drives some people to quit. It almost appears to be focused on why vets quit, but not newer players who quit in their first 3-6 months. Am I reading it incorrectly or did I gloss over it? (couldn’t find my old man reading glasses)

Has anyone considered asking CCP? They have that little questionnaire when you cancel.

Granted, it’s only Omegas as far as I know, but the one you linked is probably all raging botters and their 20 to 100 alts.

Their will never be a definitive non-partisan answer to the question of why people quit. Just find another dead horse to grind into the dust.

Has anyone considered asking CCP?

I see your point, Xeux.

And much like when they actually do give stats on the quitters, people will interpret them through the filter of their confirmation bias and BOOM, another locked thread.

Like I said in the post you quoted. There will never be a definitive answer. A decade and a half along and people still argue over how the question should be asked, let alone what the answer is.

If we want to get philosophical, I don’t think most people really, truly understand why they do anything. You can ask them whatever question you want, but how can you interpret their answer?

Just ask a smoker why they don’t quit smoking. Or, ask an extremely cheap person why they aren’t more generous. People will come up with startlingly irrational justifications for their crazy behaviors. Why do we play Eve? Why do we quit Eve? Same thing. There is no end to how much people can talk about their own egos.

What I gathered from the survey is it’s for Vets who have left. I could be wrong, but I think that was it’s intention.

Why do we quit Eve. Same thing.

Since you tagged me, I went ahead and completed the survey but I doubt that it will be very helpful to anyone. The survey mostly concerns things that I don’t have much opinion on.

I can tolerate just about whatever. I’m the sort of person who just looks around, sees what they have, and then figures out what can be done with it. Scarcity doesn’t really affect me. Specific changes to gameplay I would just shrug and work with whether I liked them or not. I’m also not really interested in PvP in terms of personal participation, whether it be market PvP or ship to ship. I’m not greedy, I don’t really want money, I don’t really want to blow people up. I don’t think I’m the sort of player Eve is designed for to begin with.

So why did I play it? I suppose for the freedom it gave me to do what I want. In Eve, I could be as nice as I wanted to be. I could give people whatever I wanted to. It didn’t have items locked to my character, or a clear progression I had to follow. Most importantly, though, Eve had people in it I could meaningfully help in some way that mattered. I’m not a self motivated person and it’s a lot harder to do something if I’m the only one who benefits so having other people around to look out for keeps me from sitting idle for too long.

Of course, being nice in Eve does come with its drawbacks. You go to help someone with something, you trust them, and it turns out to be a trap and you lose your ship. That’s the way it goes sometimes and people might expect that this would make me want to quit, but it’s really the other way around. It’s really hard to be the ‘good guy’ when there are no ‘bad guys’ around. It’s hard to claim you are ‘good’ if you’re not willing to risk losing some stuff to be ‘good’. Thus do I always defend suicide gankers and other ne’er-do-wells outside the context of the in game universe where we are natural enemies. I need them to make the game worthwhile.

The universe has become increasingly safe, and nowhere is this more apparent than in highsec where I made my home. The people are so safe they need not reach out. The people are so coddled that they won’t even try to address a problem in game in a healthy way. I can’t help these people. There is no other area of space, though, where I could meet random strangers uncolored by the flag and arbitrary prejudice of an already existing organization to be of service to for no particular reason.

My home was in Ala where I had a small setup of structures that the locals used. I had to fight real hard to earn trust enough to have the honor of providing services that I inevitably lost money on, but this is what was keeping me in game. It was not exactly what I had in mind, but in some sense I was still being helpful and it gave me a reason to log in, get ice, and make fuel to burn or the isk to buy fuel blocks. Ala was taken by the Triglavians, though, and with it went what was left of my obligations, and reasons to keep playing.

This would not be the only reason I left, and I don’t think it would resonate with very many people, but it did put the final period at the end of ‘I quit’.

With the amount of active pilots left, one would assume that CCP will open a toll free phone line that goes to message bank after hours to take concerns from departing players.

The answer has become “people should join EVE because there is a 1 in 1,000 chance that they befriend someone and endure the game together for the next following years”.

At this point, CCP is not selling a game. They’re selling a online befriending service, and not a good one given how easy and unconsequential is to betray friends and strangers and how harsh is the punishment for trusting the wrong person(s).

They’re selling a online befriending service, and not a good one given how easy and unconsequential is to betray friends and strangers

Their befriending service works just like real life works. Is not the best, but some would prefer it for its realism. Too risky for CCP to change that. What if they all go away and CCP would have to spend another 10 years starting from beginning in terms of playerbase its most known for? The risks!

There would be no sensation, no tears, no dramatic events, and no laughs, no victories build on backstabbing… It would be all calm gardening in your backyard.

The Incarna trailer showed that even in stations, there will be backstabbing and treason, like in the room full of secret service agents. But it was only one room being released at beginning, no other people around to interact with on so many levels… too calm.