It was just players trying to stock up before the market adjusted to the new PLEX pricing structure.

This. Margins are so thin and competition is so high. That for anyone that isn’t dedicated in trading of RL money related items. It’s not worth it. More, you probably will be losing isk trying to sell plex on sell order. And to be honest, I expect that main income of plex into economy comes from new players that can’t benefit in any way from sell orders.

But, whoever doubled the number of outstanding buy orders (at bloated isk prices) was clearly manipulating the plex market. Smoking gun sort of thing, but who’s holding it ?

Remember that’s the time when Plex4Good started. I won’t dive more into this exact point as last discussion about that exact plex manipulation was shoot down by ISD as “rumor mongering”…

The announcement PLEX and Omega price changes | EVE Online was made on April 22nd, so that is indeed possible. I have no idea how many players are involved in plex trading, and the public data are not detailed enough to figure that out.
However, what I find interesting is that the jolt in buy orders occurred on the 21st, before the announcement of the 22nd, and from the charts apparently still at ‘normal’ prices (below 3.1M per unit). So maybe it wasn’t a smoking gun after all, if we can trust the accuracy of the public data. 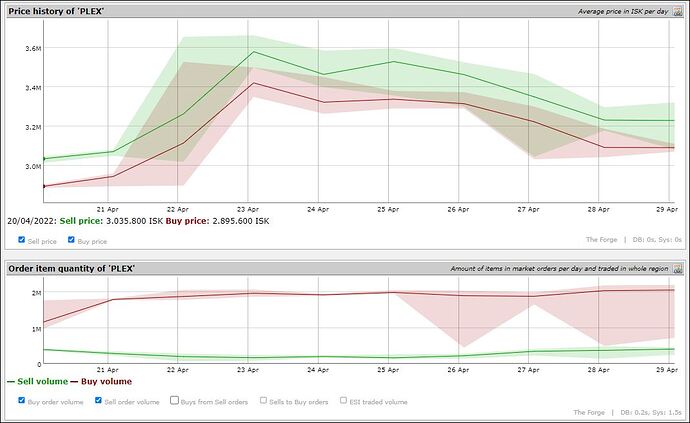 We knew that the prices would go up since like…February, I think?

Yeah, I need one more cup of morning coffee I think. Damn, I love a good story

but today is not that day.

I’ve played EVE casually on and off for a few years, until about 3 or weeks ago when I decided to take it a bit more seriously.

I certainly would pay for a omega time, even after they increased the prices, however I want to plex my account at least once first! I don’t feel I’ve earned it otherwise lol

I was logged in and waching the market and saw the jump just a short time before the server restart that day and then the news droped so some select few got the wind of it before the rest.

I paid for Omega time for years and then with a dislike of what CCP were doing with the game and later the price increases i decided to plex the 2 accounts. Everyone has their reasons for plexing or paying so no one is wrong on their choice.

As long as i can earn ISK to plex plus have enough to PVP then I am happy, no point at all just trying to get the money to plex and nothing else.

Three notable observations were made since this thread started:

Your first post, you made 3 observations and all 3 are wrong and the conclusion is wrong too. That’s quite the feat.

He’s just showing how qualified he is to post on the EvE-O forums. The answer is ofc “very”.

I never let my love of a game get in the way of facts, nor do i discount others findings without substantive proof of an error. as you have done both and offer nothing but unqualified scorn, you are obviously either a troll or a shill. either way, you offer little to anyone.

Who said it was?

Im guessing english isnt your first language, so sorry for any confusion my post has caused you and welcome to the forums!

…oh, you weren’t with that other person AND you were not being sarcastic. very sorry.

So here is a 13 year vet perspective. I think not many of us left who can see the big picture and how screwed this game has become. So when i started in 2007 i remember buying 60 day time cards on the time code bazaar ccp forum for 800 million, Thats 60 days or 1000 plex. Plex is selling at 4.1m per so today that 60 days would cost me… 4.1 Billion

So 800 million to 4.1 billion? sorry in 13 years my isk income has not increased by 5.125 times? If anything with scarcity you have made it harder to acquire isk and buying plex aka time cards. This clearly is predatory or just down right incompetence on CCP part.

with scarcity you have made it harder to acquire isk

This clearly is predatory or just down right incompetence on CCP part.

No, it’s simply supply vs demand, combined with a cost increase but that’s not nearly enough to make up for it.

It absolutely did, by even more than that. In 2007, it was considered “high income” to chain battleship spawns for about 30-40 million ISK per hour. And only the top people in alliances were allowed to touch DED complexes that could start to push the very lowest end of nine-figure incomes.

Then we got incursions and wormhole sites, and suddenly an average player could pull in 150 million an hour without many problems, and high-end players could do 200-300 million per hour running group content.

Today we have super-capital ratting and T5/T6 abyssal sites making 500 million per hour after expenses.

You just haven’t kept up.