Do any of you use them in pve?If you do for what types of pve and what hulls.The zero resistance penalty I find is quite harsh

The most common use I know for them is the polarized garmur for running the team burner missions. You orbit out side of hit range so the resists don’t matter and the extra damage is very useful.

A few people have used them for mission blitzing, pretty sure mainly used on marauders thanks to bastion and the +100% rep bonus.

So null sec belt ratting? Could work. Usually if you get caught you’re screwed anyways because you’d most likely be caught by someone with a (covert)cyno so extra tank wont matter.

Yes nullsec belt ratting.I’M not worried about getting caught machs warp and align fast and I got extra implants like ascendencies to help even more

with bastion, a pith x-type and two shield boost amplifier, you can tank 1100 dps (1300 heated).
While dealing 1600 DPS @30km with polarized fury torpedoes(1900 heated). Sure your cap only lasts 4min(3min heated), but anyhow you can mjd off once every minute.

Double painter helps you have a 0.5 Hz precision

If you go with gist XL then you are cap stable for 880 dps tank. May as well use apply rigs to multiply your precision by 1.5 .

The issue here is belt rats don’t behave like anomaly rats they tend to use mwd to close in if they have short optimal so I was worried torps wouldn’t apply.

To be honest, I never considered them for pve but that’s because I prefer to fit more on the tanky side than spending 2 bajillon on overpriced zero-resist guns.
For me the +0.000001% tracking isn’t worth it and I can just fit a tracking enhancer instead.

I have, but I find the biggest penalty is actually the range hit - not the resistances. You only end up getting more damage at point-blank range, but then you’re also getting absolutely pummeled as well. Polarized weapons were another one of CCP’s ill-conceived ideas.

Polarized weapons were another one of CCP’s ill-conceived ideas.

It’s a balancing act, there has to be penalties to counteract the bonus’ it gives.

Well, they all have a range penalty (except for the missile variants). You could make V specialization a requirement for Polarzied weapons. Instead of the resistances penalty make it a -25% velocity penalty instead.

This is a rather silly thread. =)

Overpowered guns, which completely negate your Resists while fitted.

The only “practical” purpose for guns like that, is Ganking. You want to hit as hard as you possibly can, and you aren’t worried about retaliation at all.

The only PvE use would be Strong Box farming. As in, ganking the NPC haulers that frequent the NPC miners in the belts. Which is slightly different than PvP Ganking, b/c you have a chance to run away before reinforcements show up.

But otherwise, there is no Mission running or Ratting use for these guns. If you can survive the mission or the rats with 0% resists, then you’re clearly using an overpowered ship for the task.

Well, they all have a range penalty (except for the missile variants). You could make V specialization a requirement for Polarzied weapons. Instead of the resistances penalty make it a -25% velocity penalty instead.

No. Then thats all people would run.

But otherwise, there is no Mission running or Ratting use for these guns. If you can survive the mission or the rats with 0% resists, then you’re clearly using an overpowered ship for the task.

A little is good. A lot is better. Too much is just about right.

Like i said i intend to use it for belt ratting for a machariel.Clear speed is important there so since i never tried polarized guns anyway i decided to buy the fit and have it shiped down to my system,I should have some feedback on if it worked or not later today.
As far as making it conceivable I had to spend about 2-3 bil for the fit

They’re good on stealth bombers if you’re fighting rats bad at longe range and some range rig/modules. Or as said above on ships with strong active tank bonuses.

They can be good for some types of PvE; missions (except lvl 5) and ratting.
They are a huge ISK investment, as you already pointed out. The amount you’ll spend compensating for 0 resists is large enough to hurt when you lose a ship. I use a polarized Golem for lvl 4 missions, and it’s easily the best thing I’ve ever experienced in PvE; it demands perfection in positioning, triggers and target priority, but it just zooms through missions faster than anything I’ve ever used.
Polarized Tengu can also rip through most lvl 4s and ratting spawns with ease.
Lastly, I tried a Polarized Kronos for mission running, but lost it to a trigger mistake. Blasters just don’t have the range to handle lvl4s anyway.

I used blasters a lot on an active navy mega just fine. I just warped out and repped up if I messed up a trigger and got swamped. Of course I had a mwd to get in range.

There’s a pretty simple polarized nightmare that will do c3 sites solo, so I assume it’s also good for l4 missions. 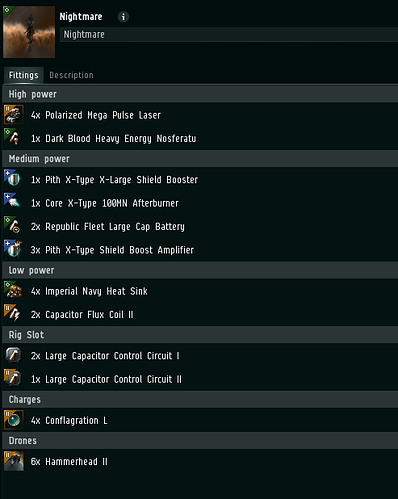 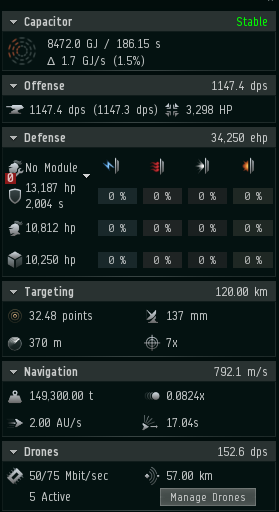 I used this Machariel fit for a while back when the polarized guns were released.
It can run every L4 mission there is but it’s pretty intensive in management since you need to make sure you apply your dps constantly and kill the rats before they do any damage to you.

Decent mission blitzer too for the ones that only require you to kill certain groups.

Edit: I remember i had faction low slots when i used it but with the amount of EHP it has i switched it back to T2.