I don’t have the skill for a Maurader and I’m not going to get it anytime soon, so I don’t know how these things work in practice. I do know that they offer huge DPS and are great a running sites. At the same time they can’t move in bastion mode at all.

So what about Pulse lasers on one? The range of these things is 48 km IIRC give or take, reduced to 24 for Conflagulation. So how do you get in optimal range 9so you’re not fighting in falloff) of the next target when you can’t move your ship?

The microjump drive offers the possibility of leaving bastion, jumping, change modes, and then shoot again. There is a major problem with this and that is overshooting. Slapping on a regular propulsion module like an afterburner allows moving into range normally, but unlike normal ships which can do meaningful damage when approaching, a Paladin won’t do meaningful damage while trying to reposition. I don’t know how Pulse lasers work in practice.

Not to be disparaging, but if you did even a little research you’d see that pulse laser paladins are hugely popular in both PVE and PVP across all parts of space (often accompanied by other traditional heavy armor ships like leshaks, nestors, guardians, etc.)

They’re some of the strongest ships in the game.

Often marauders will fit MWDs if they can’t just sit there stationary or rely only on MJDs. Your assessment that they don’t do meaningful damage outside of bastion is incorrect - they’re similar to other battleships out of bastion instead of far far above.

In practice, the range on pulses are quite practical since they match up similarly with other ships they’re used with (leshaks). They project out far better than the blaster Kronos, which is why they’re so much more common.

In practice, the range on pulses are quite practical since they match up similarly with other ships they’re used with (leshaks). They project out far better than the blaster Kronos, which is why they’re so much more common.

Huh, I didn’t know that.

Like I said, I can’t fly one and I was just trying to imagine in my head how it would work. Like I knew people used them, I just didn’t know how people got them to be effective.

a Paladin won’t do meaningful damage while trying to reposition.

actually it does the usual damage.

The range of these things is 48 km IIRC give or take, reduced to 24 for Conflagulation.

You don’t use marauders with T1 guns. 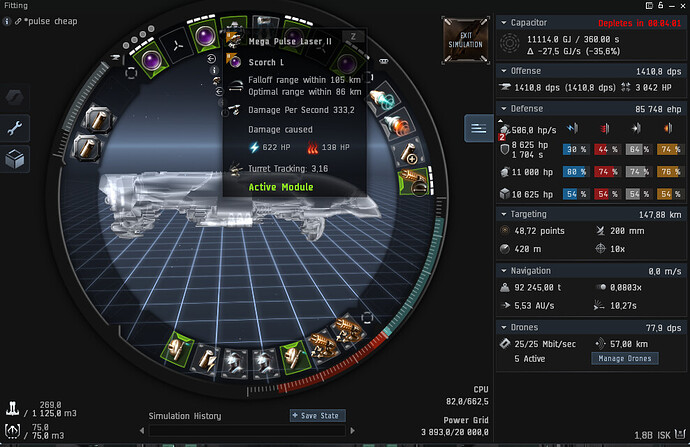 Well, it’s easy to get good range with the pally thanks to a hull bonus, bastion mod bonus, and large pulse lasers having great range for a “short range” weapon system. Add to that a scripted tracking computer or two, and you can easily get 30km optimal just with conflag. And, since most rats like fighting within 30km (well, at least in highsec), you can often just post up at a good spot, and start by shooting the faster stuff first (as that will close range first). And, by the time you’re done with them, the slower battleships will have had time to close range. Moreover, you can always use scorch if you’re fighting something that likes to stay farther out, and it’s not that hard to reposition for new waves if needed. Bastion mod’s cycle time is only 30s. So, it’s not like you have to stay pinned in place for the entire site.

Well, it’s easy to get good range with the pally thanks to a hull bonus, bastion mod bonus, and large pulse lasers having great range for a “short range” weapon system.

Whoops, I think totally forgot the hull bonus! I don’t remember how I got that range calculation. I would have easily seen the “problem” wasn’t that big of a deal if I was in one. Thanks for answering.

Because scorch cant possibly hit out to 90km

I don’t remember how I got that range calculation.

And I get 2800EHP/s repair as well in Bastion.
You sit there, You take it and You give it back.

You don’t have a range problem: the rats are normally heading towards you. If you jump 100km away then you can plink small stuff with Radio at 90km easily enough and start to burn things down with Scorch when they close.
Note: the figures are for T1 ammunition (not faction) because I’m a cheapskate in a faction fitted Paladin.

So how do you get in optimal range (so you’re not fighting in falloff) of the next target when you can’t move your ship?

You change the crystals. You are an Amarrian pilot, you should know that by now!
Carry a full set (a new definition of colourful) and flip them depending on the target.
For those that still don’t realise it: changing the crystal set has no “reload time” on it.
In practice I carry Conflag, MF, X-Ray, Standard, Infrared, Scorch and Radio.

One of the hull bonuses for a Marauder is a reduction in LMJD cooldown. This means you are still very mobile - you can bounce around to keep targets at range reasonably easily. The LMJD cooldown is the same as the bastion cycle. So, jump, bastion once and then jump again.
It is often quicker to jump away and back on two sides of a triangle to go to a gate rather than cruise the distance. It’s a Paladin. You’ve limited mid-slots. An AB is a luxury you don’t really need. You just need to learn how to judge the angles you need - this is just experience.

but unlike normal ships which can do meaningful damage when approaching

You are still kicking the same damage as a T1 mission battleship as you move to a warp gate.
When not in Bastion the ship can move (slowly, you’re a battleship after all!) and fire - you loose a bit of range (about 20%) compared to being in Bastion mode, and you halve your DPS back down to “mere battleship” levels. Remember the Paladin has a base 100% dps bonus, so the four Mega Pulse IIs are the equivalent of eight. And since you’ve already got Amarr Battleship V as a prerequisite then those “eight equivalent” turrets only require the capacitor of two turrets.
Also, compared to a T1 Battleship, once you’ve shelled out 1.1bn on the hull, Faction Heat Sinks and other embellishments are a sensible investment - they don’t loose their advantage when bastion is off.

And, seriously, T1 guns on a Paladin is like putting a Lawnmower engine in a Mustang.

I have used both Pulse and Beam Paladin as well as Autocannon and Artillery Vargur. Both have their plusses and should be used appropriately depending on the context you are in.

For me if you’re doing complexes that have gates, pulse/autocannon are significantly more useful because of their greater DPS potential and the additional time that you get to cycle bastion and warp away (because incoming gankers have to navigate the plex gates)

For open anomalies out in space I have a preference for beams/artillery as you can sit a lot further out at range and simply snipe NPCs down whilst remaining a little bit further out in case of gankers landing on the anomaly bookmark.