Reduce LP into a handful of groups

I think those five cover pretty much all LP types currently in game.
I don’t think there would be any game breaking balance issues. 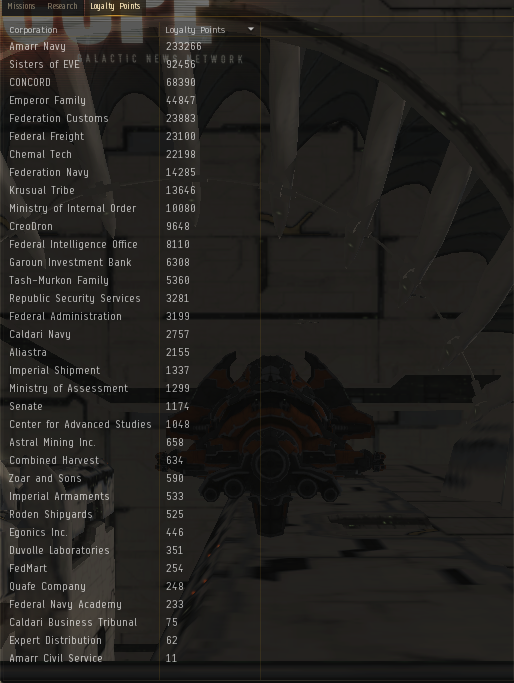 A) Why?
B) This would create infinite LP fluidity between factions - I.e I can FW for Amarr and get Minmi LP bonuses
C) It would remove the flavour of working for an organisation

Ah, the OP was super unclear on that, I thought you were proposing merging all LP’s together, which seemed silly to me.

And, I guess I can see that, but there are subtle differences in a lot of LP stores, and it would remove a lot of the minor quirks like the Interbus LP store (which doesn’t exist) that I kind of just awkwardly love as part of EVE.

In general I understand the ‘idea’ there though, and I think if under modern design principles, that’s the way EVE would be made if it was made now, but I still don’t think there’s a clear ‘benefit’ to this over the current system, barring allowing more mission runner flexibility in agent choices if they’re building towards a specific LP goal.

Sorry. Yeah. OP was bad, typed on cell phone and I like to keep things short, but they don’t always come out simple.

From my previous experience with the LP stores, most of the Government NPCs tend to have the same stuff.
Faction Ammo, Navy Ships. Faction modules.
While the Non-Government had other stuff, but mostly not the Navy stuff. What it would end up doing (From my point of view)

Concord - Concord stuff
Empire FW - Navy Faction Stuff
Empire/Pirate Government LP Store - (edit: logged in and I’m looking at the Gov/Not-Gov stores. Seems like CCP could do with some cleaning up in the LP Stores. Like we still have charters as an option to buy. And there aren’t that many differences between Gov/Not-Gov besides some BPCs and some chips.)
RW LP will be how ever CCP is making it
Empire/Pirate Non-Government LP Store -

and it would remove a lot of the minor quirks like the Interbus LP store (which doesn’t exist) that I kind of just awkwardly love as part of EVE.

Interbus LP wouldn’t change, as they are not really part of any Empire/Faction. Yes, they are former Gellente (if my memory is right) but they sort of fall under the Concord more as non-government corp than under any other faction.

ORE only has the one corp that I’m aware of for LP. Which is pretty much the same for the other non-empire factions as well.
SOE would remain two stores (NPC Null and HS for balance purposes)

What other subtle changes are you aware of? I’m looking at two Amarr Empire Government based corps and as far as I can see they offer the same stuff.

In the faction LP stores (Amarr, Caldari, Gallente and Minmatar) there are the “military” style LP like the Navy LP stores but there are also, for want of better terms “Science” e.g. Roden Shipyards and “Astrometrics” like Modern Finances, Poteque, etc.

There are also subtle difference between Thukker ORE and SoE to all the above.

I do think there could be some work on cleaning up LP stores and rebalancing costs due to influx of deadspace modules etc that have devalued many faction modules and made the Lp stores seem very overpriced. But it is quite a large question and has all sorts of knock-on effects so needs some careful thought.

I’d also be in favour of some sort of ability to convert LP (at a loss) in the same way that Concord LP can be converted but again it needs to be done, if at all, carefully.

I like that LP stores are all a little different, even between major navies. I see the desire to mash them all together but it will remove all the flavour from them

I think you and Wolf are miss understanding me, as Jin does/did.

SOE and ORE are not Empire factions. They like the pirate factions would maintain their own LP stores.

LP groups would be

Pirate Factions - this includes SOE, ORE etc. would remain how they are.

The only clean up takes place in the Empire Faction LP groups.
The Amarr Empire would go from having 40+ LP options to 1 FW, 1 RW, 1 Government, and 1 Non-Government.

I like that LP stores are all a little different, even between major navies. I see the desire to mash them all together but it will remove all the flavour from them

I would like to see to option to delete unused LP to reduce that long list, this would be the players choice to do, or have a low value, low LP option so you can clear up the long list of npc corps you will probably never do anything with again.

There are different Republic Fleet modules available than Caldari Navy, and so on. I still don’t see why this is necessary, especially since you ought to be stacking LP one of three ways: By security missions, by Faction Warfare, or by L5’s out in null. Chances are any PvE pilot has good standings with navies or arms manufacturers, their LP will most likely be available through useful sources once you’re at a point that you can start making some money off of it.

There are different Republic Fleet modules available than Caldari Navy,

And where did I say that Republic LP would work for Caldari items? I don’t ever remember saying that LP would transfer across Factions.
I don’t know how to make it clearer. All this does is reduce the number of LP types PER faction. Not make all factions one LP.

Amarr would go from having like 47 LP pools to 4 (the others Empire factions would as well)
1 for FW (This means there are 4 FW LP pools. Once for each Empire)
1 for RW
1 for NON-FW Navy/Goverment
1 for NON-Goverment corps.

So instead of having the possibility to have LP with 200+ groups, it gets reduced to like 30.

again: This does not mean Caldari Gov LP would work for Minnie or Amarr or Gallente Gov LP stores and vise versa. Caldari FW LP would continue to not work for other FW LP stores.