ECM has long been a difficult mechanic from a balance perspective. As pointed out in the dev blog the last time it was significantly reballanced, the RNG nature of ECM can often feel bad from the perspective of both the target and the user. As an enthusiast of all things E-War I’d like to lay out my idea for a ground up reimagining of ECM that I think will feel better from both sides of the engagement and open up more choices and options for countering its use, while maintaining its role as a strong disruptive force when utilized well.

The core change in this proposal is that ECM will no longer break ALL locks of the target vessel, and will not prevent new locks during its cycle. Each successful jam will break a fixed number of locks. Generally I will assume one but that is a potential point for balance considerations or ship bonuses. The goal here is not to disable a ship and take it out of the fight, but to disrupt coordination such as cap chains, logistics and timed volleys. Additionally, needing to relock targets repeatedly adds cognitive load to the hostile pilot, reducing their effectiveness in battle. With this arrangement current strengths and cycle times of ECM modules would be very weak, as such the modules themselves or the ships bonused to them will need to have significantly improved attributes. Below is a table to demonstrate the expected effectiveness of ECM with some rough approximations of where I think the numbers should probably fall. These are by no means final balanced figures. For reference, a current T2 ECM module has a strength of 4 and a cycle time of 20, while my base module is modeled with a strength of 5 and cycle time of 5. 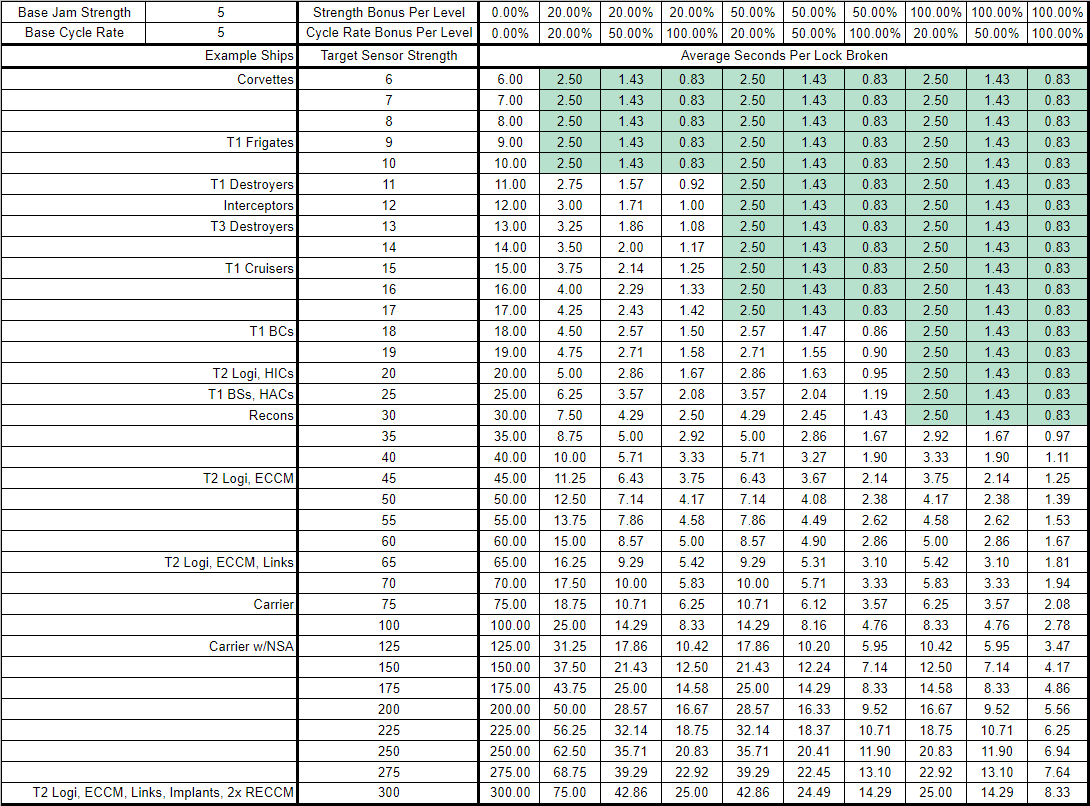 Reimagining ECM1090×806 32.2 KB
You can see here that an unbonused ship will still be able to use the module, but on average it will take several cycles to break even a single lock. A lucky pilot could potentially use it to get away from a single attacker, but they will not be able to dominate a fight or escape a group of hostiles. Meanwhile, on the bonused ships you can see that strength bonuses are important but cycle time reductions really shine. The green highlighted sections are where you are guaranteed a successful jam, so any additional strength bonus is useless.

This model of ECM also opens up more options for potential counterplay by the target, both before and during the engagement.

Let me know what you think.

“Fixing” ECM by making it not work?

What you are discribing here is more of a “lockbreaker” than ECM.

Had similar concept some time ago. Didn’t see that any problems current system have had fixed. Putted idea to trash.

You want to fix ecm?

Take it back to how it used to work then.

I think this is the conclusion anyone who put enough thoughts into the problem of ECM come to.

Breaking ALL locks was a problem, NOT breaking the current lock IS a problem. So obviously the solution lies in the middle.

ECM should break a lock, until it breaks the final lock. But it should also offer the window where the ECMed pilot can reacquire lock before losing it again.

In any cases, I wholeheartedly agree OP, don’t listen to the short-sighted bummers this is great thinking!

By the way, this also introduce the idea of having multiple locks on the same target.

This gives ships with strong targetings like Amarr and Caldari ships more leeway against ECM right into their stats.

This also gives more room for ECM to work more often instead of being riddled of RNG to balance it.

That and it gives a direct action a pilot can do during combat to fight against ECM.

The dev blog you linked was nothing more than the whine of an inexperienced dev.:

As a victim, watching your ship die while jammed without anything you can do about it feels bad. As an ECM user the system doesn’t feel great either when you get unlucky and miss a lot of jams. We would love to improve both sides of this coin by giving ECM more consistent behavior while also toning down the helplessness that comes with being jammed.

He was helpless because he didn’t train the right skills or fit properly, but also because this was the time when they were making the huge mistake of tring to balance 1v1 PvP in EVE.

There was nothing wrong with ECM until they “fixed” it.

There was nothing wrong with ECM until they “fixed” it.

No there was… there still is. It has always been the weakest ewar in the game with damps always being the better choice.

On the other end the ecm drones have always been broken particularly in large numbers.

The reason that blog sounds like inexperienced winning is because it’s just echoing a loud minority that would flock to the forums after losing a fight. It also sounds so disconnect to the actual change because they just change for changes sake to look like they were working on it.

Ecm is still rng you still have streaks of missed jams and you still can’t do anything when jammed assuming your opponents diet doesn’t consist of crayons.

flock to the forums after losing a fight

That is not the case at all. At that time Abyss was still in internal testing.

I think this is the conclusion anyone who put enough thoughts into the problem of ECM come to.

No. Not even near.

Problems of ECM are

Changing ECM to break only some of locks will not fix problems. It’s still random. It’s still cannot be actively fought against.

Insainly HIGH role of random in fight with ECM

Not true at all unless you don’t understand the mechanics. A good ECM pilot should be manipulating most of the randomness out.

No ways to actively fight against ECM

Not sure how you came to this conclusion. There is a reason most E-war pilots will opt to use any other E-war. ECM is just too week. The ships are soft a single mid shuts ecm down pretty hard and your primary targets almost always run them.

No it didn’t because anything that could shoot back being jammed by an ECM pilot wouldn’t have been in range to do so anyway. (unless the ECM pilot had no idea what he was doing.)

most of my fits that did before still do. but those were all ECM burst except my rook that had one multi. Still run that one multi in case I run against a group with logi. Outside of that the only people running ECM solo fits were doing it as a gimmick or to troll.

(I want to assume this one didn’t count running ECM drones solo but you mentioned the GNI so i wasn’t sure. Because ECM drones are still common solo)

No it didn’t because anything that could shoot back being jammed by an ECM pilot wouldn’t have been in range to do so anyway. (unless the ECM pilot had no idea what he was doing.)

Not true at all unless you don’t understand the mechanics. A good ECM pilot should be manipulating most of the randomness out.

Looks like it’s not me that don’t understand mechanics. Or math.

Added way to fight back at least for fleet (Note: some HAC’s can shoot 100+ km)

i mean that didn’t add a way to fight back it just made it easier to adapt to damps or ecm.

Looks like it’s not me that don’t understand mechanics. Or math.

yeah its mostly just RNG manipulation and knowing the base sensor strength of the different ships as well as knowing when to add another jam if one failed or when to wait for it to cycle and keep from wasting jams.

Insainly HIGH role of random in fight with ECM

Not true at all unless you don’t understand the mechanics.

This, the endless parade of the uninformed. This goes hand in hand with “no counter” because it is the counter that makes it seem random to the uninformed.

So, so, so many of the arguments presented about this subject are situational and always spin the argument in the posters favour.

ECM is broken. It always has been.
It can have the ultimate disabling affect on a target, at times for the entirety of the battle.
It can also be the most useless waste of a players time.

There are many examples of both outcomes.

Because the current mechanic cannot be fixed it is broken.
No other module in the game has a stacking bonus (most have a stacking penalty).

My point of view has not changed by any of the subsequent “arguments”.

So for 1. My preference was for them to either attempt to piggy back on the Heat mechanism or to “freeze” a random stack of modules not the ship.

It would likely be less Dev. time to design ECM to aggressively overheat modules on the target. Then ECCM could be designed as a anti-heat mechanism and could become a valid choice for fitting just to tackle overheating modules anyway.

The only other quick-fix way I can think of exploring, to try to fix ECM, would be to buff the modules significantly but allow use of only one ECM module per target.

It would likely be less Dev. time to design ECM to aggressively overheat modules on the target. Then ECCM could be designed as a anti-heat mechanism and could become a valid choice for fitting just to tackle overheating modules anyway.

Please don’t mess with other players overheat. This will be too difficult to balance. Overheat mechanics is already complicated.

It can have the ultimate disabling affect on a target, at times for the entirety of the battle.

Failure to properly fit is a user error.