Replacing the CSM with another model?

Finally, someone puts forward a practical option with a good chance of success!

Eve as a game did not make money in the last quarter.

Is this a fact?

I still think this makes you perfect for the job.

BTW, they totally changed in the movie the reason why the Russian Captain was doing it from the reason in the book, which IMO, totally lessens the impact of the story.

The CSM isn’t perfect. Of course not, it’s not run by the Princess, how could it be? I’m not saying any Eve related body outside the purview of Princess Aiko is obviously bogus and overrun by carebears, bots and parasites determined to ruin the gsme. I’m just saying it’s wise to assume they are until proven otherwise. Hail Aiko!

Forget the “free trips” “representative” attempt and replace it with a “direct democracy” “referendum” one account one vote and a ticketing/voting system for features.

I’ve met enough EvE players to understand why CCP wants nothing to do with them.

You don’t ever truly meet anyone, as you walk around with a mirror in front.

Am I to take from this that you are of the “the CSM doesn’t agree with me personally, so it is ineffective” bent?

Let me set out my thinking here.

My guess on this is that this is a response to the retriever pack issue, and if you disagree with the CSM’s position on this you will find you are a minority on those expressing an opinion on the subject. Which, fair enough, but you can’t claim the CSM doesn’t accurately represent the player base as a whole if your view is in the minority. Which by any objective measure it is.

My guess on this is that you have some personal grudge against a CSM member - more than likely Brisc, as that is who people tend to go after for whatever reason - and have dressed this statement up as part of this grudge. I may well be wrong here, so please feel free to correct me if I am!

Where the difficulty lies is in ensuring the separation of players and accounts. How can you determine a player versus an account - particularly in the case of players running dedicated spy accounts through VPNs, separate emails, unliked bank accounts etc? To effectively police this would require either forcing players to link all accounts (and thus giving a route to destroy spying in the game), or banning multiple accounts entirely. Neither of these solutions is acceptable

Happy to hear further suggestions on this however.

CSM acts very much like a Trade Union Side (as things shake down in the UK) in terms of its scope and activities. They do not instigate change, but instead liaise with management (CCP) and respond to proposed changes - ideally in advance of their publication to the wider playerbase, but this only at the whim of CCP - based on their understanding and consultation with the players they represent.

In this way, the CSM cannot be held responsible for game changes that CCP direct are to be implemented - all they can do is attempt to moderate the more egregious shortcomings through negotiation, advocate for positive change that CCP is under no obligation to listen to, and generally keep the players as informed as they can (while under NDA) of what’s going on.

If you expect any player representative body to have meaningful impact on game design, company motivations etc then you are wildly optimistic. CCP is a business, and it is driven by the needs of the business, not the desires of the CSM - however much me or you may believe that listening to players or their representatives will help, if CCP disagree they don’t have to do anything.

If you are genuinely keen to improve the representation of players like you on a player representative body, as others have suggested you should seriously consider standing for the next term. I’d be happy to help out with some advice from my past employments in these sorts of bodies.

The CSM are not the issue. The people in control of Eve are the issue. CCP quit listening to the CSM for most of the last 2-3 years. So it would not matter what group was there because CCP didn’t or does not want to listen.

The next 6 months of Eve will determine the future of EVE Online. Either company will start listening to the players or they will lose this game. Either the game gets fun and rewarding again or a lot of people in Iceland will be looking for new jobs.

I can not wait to see how fanfest goes with how CCP has been treating the players.

It’s very important to remember that there’s people beyond the current CSM who are under NDA and used to provide confidential feedback on ideas. Past CSM members remain under NDA for several years, and there’s also expert players (who may have never run for CSM) from under-represented areas like wormholes who are under NDA and actively used for feedback on them. The base of people (like the CSM) who can provide feedback under NDA isn’t really the issue.

The real issue is that that CCP isn’t choosing to give insight into areas that need feedback or act on it properly.

If you are genuinely keen to improve the representation of players like you on a player representative body, as others have suggested you should seriously consider standing for the next term. I’d be happy to help out with some advice from my past employments in these sorts of bodies.

No thanks. After the ad hominem, polemics, and passive aggressive nature of your post, I do not think any positive interaction is possible with you, and you did not intend there to be.

The next 6 months of Eve will determine the future of EVE Online. Either company will start listening to the players or they will lose this game.

How will ignoring player feedback for the next six months be so important? CCP has been ignoring the playerbase for YEARS.

Looking at recent events, how the CSM has shaken out as a player advocacy body, and the original intended purpose of the process for giving perspective to game development

See i think the issue is that you think that the CSM should be more than just a sounding board, now while they will ask their opinions that doesn’t mean they will listen where they believe something should happen so even if the CSM was 100% against the idea that wouldn’t stop CCP from doing it

Sorry you feel that way friendo. Not sure I understand where there was an ad hominem argument in my post, though I will grant you I was a little snarky! In fact I pointed out specifically the elements I disagreed with in your post, why I thought you might be coming to those conclusions, and invited further response to correct or clarify.

While I’ll admit to having no shortage of experience with “robust debate” and “full and Frank exchanges of ideas” - and this coming across in my writing here - if you cannot motivate yourself to respond substantively to my points, it’s probably a good thing that you do not seem to be interested in taking on a negotiating or representative role.

If any of the current CSM refused to engage after so light a tickling, rhetorically, they would all have been sat doing nothing since before the election results came in.

However, the cynic in me tends to think that your refusal to reply stems more from not having the substance to back up your positions, rather than any offence or umbridge actually being taken to my points

years ago i was a member of the SOE community group. much like the CSM we met regularly viia skype to discuss aspects of the various SOE games. I was invited to join the group by SOE community manager based on my activity on the forums and some vetting with players in game. No populartiy contest voting process. the group members represented not only different SOE games we also represented diffrent playstyles. once a year we gathered live at the convention. in general SOE listened to what we had to say and rarely implemented new content without discussion. I feel like that system was working. maybe something for CCP to look at

However, the cynic in me tends to think that your refusal to reply stems more from not having the substance to back up your positions, rather than any offence or umbridge actually being taken to my points

Well, go back, rewrite it, to just be your points on the ones I specifically wrote, and I’ll happily reply to that.

Like I said, if your sensibilities are so delicate as to require a re-drafted forum message before replying in good faith, I suggest you check out the kind of guff that gets thrown at the CSM on the daily. 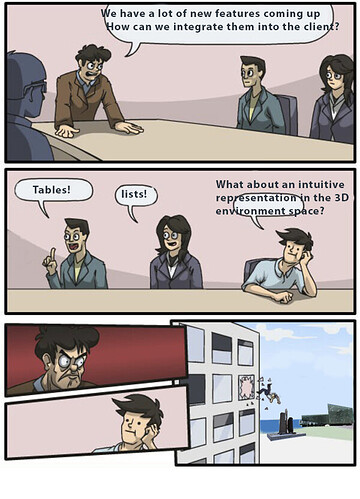 You already admitted it was with snark. So, the good faith vanished right there. Now if you’d honestly like a reply, point by point, you could re-write. But from my perspective, discourse was not your first intention with it. But have a good day Sir.

I’ve met enough EvE players…nothing to do with them.

You’re the villain in your own story.

Where were you in 2003 when I started this roller-coaster ride?