Results of the Capsuleer interests survey

Thank you for joining at the survey posted at the start of the initiative. The results are now published (Keeping name anonymous, obviously) and they will be compared with the actual results at the building of the monuments to measure also the reliability of the statistic sciences today:

You’re free to propose here your interpretations about these results considering the low number reached (But high enough for first surveys, thank you again) but maybe waiting for the monument inauguration is suggested prior judging the results.

I think that some of the participants are more anonymous to you than to some of us.

It’s obvious, if you fill a public form without any restriction with the “anonymous” word in any possible category.

The cons of the universal suffrage. 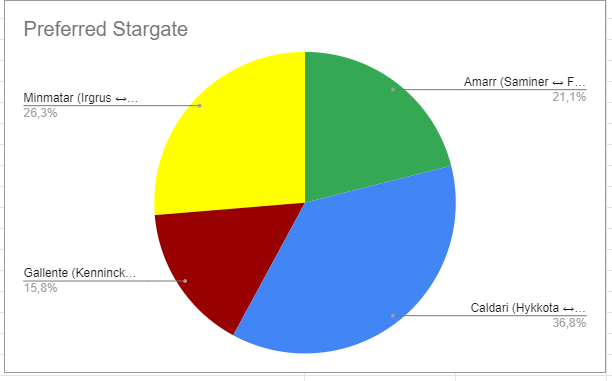 Wouldn’t it have made more sense to do green for Gallente, yellow for Amarr, and red for Minmatar?

Gallente are like bloodthirsty animals, like bulls with blood-filled eyes, they can bring only death and freedom, which means only more bloodshed, murder and genocide. Red is proper color for these freedom-obsessed cultists and maniacs.

As for minmatar, rust is actually not red but brown. And there’s no actually brown color, it’s just very very dark yellow.

I do agree, however, that Amarr shouldn’t be green. Considering how awful and disgusting the Federation and gallentean ‘culture’ are, assigning their colors to other nations is just an insult to these nations. Amarr didn’t do that MUCH wrongs to be insulted in such harsh and rude way!

The graphic was corrected. For some reason the colors have been randomized altrough the checks.