★ Rookies can have Sunesis giveaway

As summer is about to end (thus both old and new players are expected to increase in numbers) and as we are slowly approaching the holiday season, it is the perfect time to start up this (most probably long term) giveaway that was planned and prepared for since some time.

Again I thank @Drago_Shouna who generously donated 5 billion ISK to our giveaway fund before biomassing his characters.

I am confident spending @Drago_Shouna ‘s donation to kick start over half a thousand rookie players’ careers with such a useful ship is a satisfactory expenditure of the donated funds.

I am looking forward to execute the giveaway which definitely will be a long term effort.

As the Sunesis has minimal skill requirements and is a versatile craft capable of ratting and general combat, small hauling, can be fitted to be sub 2 sec align, can be fit for salvaging and so on it is a good kick starter craft for new players which has its uses even for a veteran player thus is a suitable tool that the receiving player can benefit from long term.

★ A recommended fitting for the Sunesis

Note that this is just one recommendation for a general purpose role. Based on your preferences, trained skills and intended use you might alter it or use an entirely different fitting. This is just one possibility to consider that has a wide range of uses but is not focused on any one task thus is a jack-of-all-trades but master of none.

The 5 bil ISK donation to the Kherub Angels giveaway fund.

5 bil ISK donation received As he is biomassing his characters @Drago_Shouna generously donated 5 billion ISK from his main character (did not specify if I can mention the name so I refer to his forum alt instead which he noted never hidden to be such so is publicly know for sure) to the Kherub Angels giveaways initiative. I’ve transferred the donation to an unused wallet division that I now dedicate to donations. As such this and future donations are tracked and handled completely separate fro…

A few months ago I’ve spent the 5 bil donation on Sunesis destroyers. 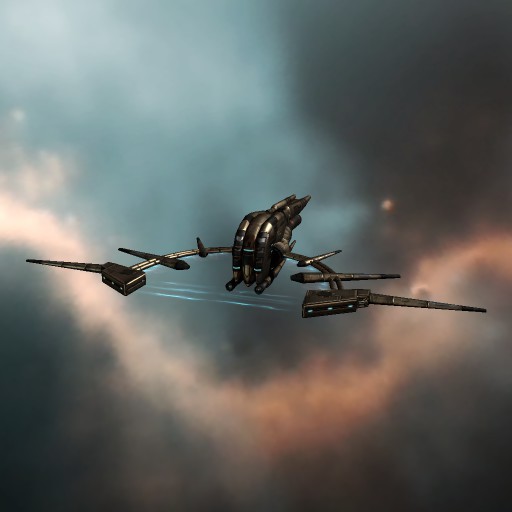 The Sunesis-class SoCT Destroyer allows any acolyte to protect the investigations and secrets of the society. Since it has very low skill requirements, any capsuleer can pilot it. It serves well in research and exploration but truly comes into its...

Similar to an earlier but much smaller scale giveaway the Sunesis destroyers will be given away one by one over time to rookie players in starter, career and other systems.

You can read the details of the mentioned earlier giveaway in the related thread:

The destroyers will be fitted with Medium shield extenders to provide basic tank which will be paid for by the Kherub Angels corporation.

Check out our giveaways and guides at:

Finally had time to spare. The first Sunesis has been given away successfully. 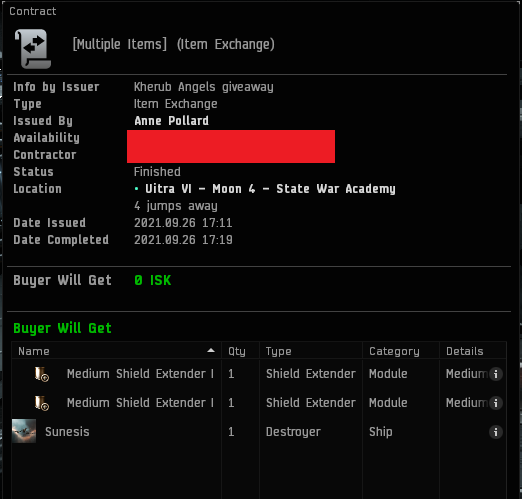 The first twelve Sunesis have been given away successfully.

Based on the experience so far around third to half of the people decline the chat invite (I guess are either busy or simply don’t want to talk) and around a fifth decline the offer of the free ship for one reason or another (already have stuff and/or have lots of ISK from a friend or from own source or simply don’t need it and/or want to get by on their own without outside help).

Keep at it. I can appreciate the individual attention you give to handing them out one by one. Even if people don’t need or accept the ship, the fact that someone reached out to them to give them one personally probably counts for something. I think that it does, anyway.

Agreed. So far everyone who accepted the chat invite appreciated the help or just the social interaction regardless if needed the ship itself or not and if they needed help with something I’ve provided my help if I could or just linked my guide for some general guidance if seemed appropriate.

Some of them were not rookies as they were alts of veterans or played earlier and were well established but still was a good chat so was no complaint on my part just shared my experience how it went, actually I applaud people declining the offer as if they don’t need it they chose to let someone else have it who actually need it which is very mindful of them and shows care for rookies instead of gaining some ISK or a free ship for themselves so I very appreciate their decision.

Same goes for people who do not accept the chat invite as I’m sure they have their valid reason for not wanting to chat, maybe busy with the career agent tutorial or just not in the mood or not trusting a random stranger or simply don’t care at the moment and by declining the chat invite I instantly know I can move to the next candidate thus saving my time not just their own so it is beneficial for me as well rather than if they let the chat invite hang there for no reason so is also a good thing in my book.

I’m just letting you know I appreciate what it is that you are doing, for whatever it is worth.

It is better to be the one doing stuff instead of a hollow cheerleader on the sidelines, but I still think a little encouragement can help a little some of the time.

Oh I see. Yes it does help. Organizing community stuff can get tedious sometimes so aside of always good to know the effort is actually making a difference it also helps when people encourage the effort, feels as a common thing instead of just doing it solo even if not physically helping out the encouragement still helps moving things forward so is appreciated.

How does one participate in such an giveaway?

This is an in-game “event” type of giveaway similar to @Mike_Azariah 's Operation Magic School Bus. I visit the systems, contact rookies directly and give them the ships. It is not a request based giveaway where the rookies contact me for the handout.

Still ongoing though very slowly due to lack of time to spare to play EVE in general, but not in a rush as what matters is the ships reach rookie players who benefit from them not to be done with the giveaway as soon as possible so still on track at least.

Due to lack of time since a prolonged timeframe and as the situation does not seem to improve in the foreseeable future I’ve put much consideration into what to do with the giveaway.

As @Drago_Shouna whose donation before biomassing funded this giveaway also donated to Mike as well, also as the format of Mike’s giveaway is very similar to this one and finally as he has time to give away to rookies in the long term, it seems the best solution to donate all the Sunesis destroyers (and two medium shield extenders each funded by the Kherub Angels corporation) to Mike’s Bus as this way rookies reach these ships all the same.

After contacting him earlier and getting the greenlight I’ve made the contracts a few days ago which he had accepted recently so the assets are now in his possession.

Here is a detailed chart of what was donated and where:

Note: As you can see I’ve added a couple extra from my own personal stock.

I’m confident this being a proper solution that @Drago_Shouna himself would be satisfied by.

By this turn of events this giveaway has concluded.