Safety BIG RED button on wallet (I did it again...)

I did it again…
I misread a market order I made…
Instead of 3.4 Mil for a bulk stock I wanted to sell I put 3.4 Bils…
And the market fee was 3.5Bil that were immediately pull out from my poor wallet!!!

IF there was the safety BIG RED button for threshold payments, this wouldn’t have
happened again…

I just made a new ticket…
I’m an idiot… 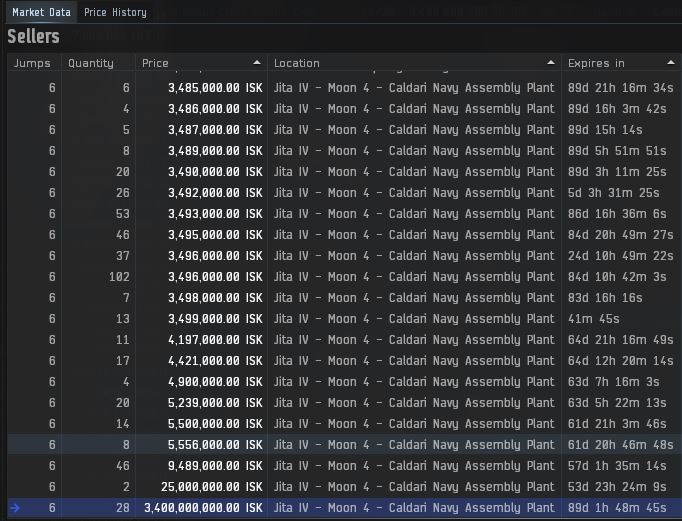 Nope, got enough stupid red dots in EvE as it is. Next time read and reread your market orders.

If only the margin warning was more reliable and would not warn you when prices are totally oka but only rarely warns you when you screw up.

I think there’s some other problem here. Did you disable the warning for a listing that’s excessively too high or low compared to the regional average?

Nope.
I just put three more zeroes than I should have and pressed ok…
I don’t remember any such warning…

Reset your suppressed warning messages; there is a warning that pops up when you are more than 50% above or below market price, which this would have triggered if you had not already suppressed the message.

That triggers when your individual market price is screwy, not you fat-fingering in an extra few zeroes on the buy order quantity.

The OP set their sell order price insanely high, as shown in the screenshot. It wasn’t an issue of listing more units than intended.

Ah, I missed that. Thank you.

And the market fee was 3.5Bil that were immediately pull out from my poor wallet!!!

Ouch! Hope CCP will refund you, with screenshots it shouldn’t be a problem.

Next time read and reread your market orders.

Yea you really want to take your time with transactions in EVE, buying and selling. It’s already bad enough with the scams so if you go typing extra zeroes lolly-jolly your game will be over quick.
I can spend hours just looking at the market. Not only I can learn but I also find stuff I didn’t even know existed.

Is there a complete list of all ‘items’ in the game? It must be a mile long!
Two miles if you count the skins.

I hope CCP tell you to get bent.

I sure hope ccp does not fix this mistake for you as that would put them on a really slippery slope.

If a loss is not caused by a bug or other server sided issue ccp should never intervene. After all where do you draw the line on stupidity?

If this gets fixed the next time somebody jumps his titan instead of bridging his fleet, does he get his titan back as well? After all that is just a stupid missclick as well.
Can I “accidently” turn off my safety and shoot somebody in high sec and lose a multi billion ship to concord and then ccp will give it back to be, because I claim it was just an honest mistake?

It was a mistake on your part so suck it up and learn from it.

I keep my money in “banks” (in corp wallets or on toons that I don’t shop with), and trade with different toons. I’ll then transfer over isk as needed. So, even if I do fudge a decimal, the damage is minimized or the order fails due to insufficient funds.

By the way, warning fatigue is definitely a problem with trading (and Eve in general). Eve throws so many at players that it conditions them to click past them without reading them. I know a lot of people tend to put the blame on the players who aren’t paying attention, but the truth is is that it’s bad design. Certain warnings should be removed entirely (such as warnings for non-destructive repackaging), and the criteria for others should be refined so that they are less likely to display when not needed (i.e. many trading warnings).

Mmhh, nice one on the corp wallet…