Any update on these new ships promised for September release as stated in Uprising – A Major New Expansion | EVE Online ?

i know we have 2 days left but normally dont see patches other than emergency fixes outside of Tuesdays.

“Uprising is a brand-new narrative-driven expansion for EVE Online launching in November, ushering in major improvements to Factional Warfare (FW), introducing a suite of new ships in addition to a plethora of balance changes to existing ships, corporation and alliance logos on your vessels as part of the introduction to heraldry, new visually immersive hangars, and more”

Releases in November.
Can’t wait to see those new ships. I hope they won’t be current-ships based but truely new designs because there a quite a few ships that look the same but are supposed to be different ships because of the name and tech. 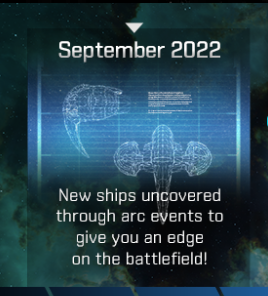 Trying to see where i can uncover these ships

A player posted that he got aware of new ships from SISI but I don’t get why they didn’t take screenshots.

Information on the event, and links to discussions of what’s been seen about the new ships so far:

Greetings fellow Empyreans! I have been working on my wiki using Notion for several months both for my alliance and for organizing the lore. I was already going to make a section for in game Events both seasonal and one-time and the upcoming pre-expansion event seemed like a great time to try it out! Here you will find everything I currently know. I will be adding information as things become clearer. If you want to submit fits or the like please do so, I prefer EVEWorkbench links. Otherwis…

Other posts on the topic linked in this thread:

What do you think the new ships will be? General Discussion

I think we mite see more mining ships and maybe some more destroyers. what do you think we will see?