I started the game as Galente character and I have pretty much trained skills to fly Galente ships. However, after about 1 year not playing, I somewhat like the Amarr ships more (the visuals at least). Would it make sense to start training for Amarr ships? im now sitting at close to 6mil skillpoints. how ineficient would it be to train Amarr, and what is the share of skills that is transferable between the two?

Train all the ships if you can, they all provide different styles of play.

Plus, cross training into multiple ship lines will also give bonuses to Pirate ships which benefit from having skills in multiple lines. For example, the Astero, which gains bonuses for Amarr and Gallente frigate skill levels.

There are many good ships in all states. And it is good idea to have access to as much of them as possible. Only one advice do not jump from one to another, if you decided to sit on something sit on it well try it and then decide what to do next.

Firstly, congratulations on your quite sensible interest in the superior race! I say you “bite the bullet” and make an Amarr character from the beginning, leaving your gallente character behind before any more skillpoints are involved. Better now… 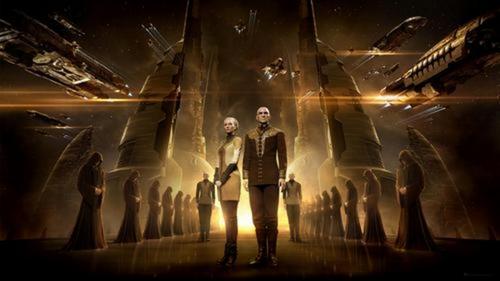 how ineficient would it be to train Amarr, and what is the share of skills that is transferable between the two?

Fun fact… it is actually MORE EFFICIENT to train another race’s ships on the same character.

The reason?
Some skills are “universal.”

You will simply need to train up the Amarrian racial ship lines and energy weapons to make Amarr ships work well.

Using a different character to fly different ships does happen, but usually with more specialized duties in mind. For instance having a character that is a highly skilled miner, hauler, PvP, or trading are a few of the specialized characters I have used and seen.

As mentioned in this thread, it is more efficient to train for different race ships on the same character because of shared skills. In addition I could add that unless you are using Omega level accounts you will need to log out of one character and into another if you want to fly ships that are specific to your characters.

It is best to train a character for a specific job instead of a specific race of ships.

all right. I see. I mean I will put them to train, in any case, at this moment I am not training for anything particular. More like aquiring skillpoints that could be useful later once I figure out where do I fit in the universe

Honestly, the best way to “figure things out” is to go out and start talking with people.

Try mining or exploring a bit, build up some ISK and chat with other explorers you come across (or on the forums).
Once you have enough ISK, buy up a bunch of ships you fully intend to blow up, fit them up, and go out to PvP a bit. Talk with the people who kill you. Ask for their advice.

You don’t need to be “perfect” in any way.
Just have a good attitude and a sense of humor.

If people want you to be “perfect” in some way before you can hang with them, then you are better off not making that connection.
In fact… take their name(s) down, get good (and/or friends), and then go after them.

Cross-training for other races’ ships is very rewarding (and often necessary when you join nullsec alliances) but it comes at an extra cost of also having to x-train for the other weapon systems for which those hulls are bonused. So that is inevitably a long term project. Opening up all 4 races for the subcap hulls takes quite some time, but you reap the rewards once you start going into tech2 ships, the skills for which are not racially related.

Any “general” combat or “support” skills, in targeting, gunnery, drones, navigation etc will of course still give the bonuses in a broad sense. And if you did the Magic 14 that should be a good portion of your 6M sp at this moment. Racially related skills (like weapon type -lasers, projectile, hybrid, missiles to some degree- and hull type) will have to be trained.

There are many ways of doing this, but none are fast.

I would like to make one suggestion though. Gallente and Amarr share armor tanking. Perhaps it would be more interesting to go for a shield tanking race instead, like caldari, which offers interesting ships and some spectacular fits. Moreover I found that laser weapons only really perform well once you hit tech2 at level 3/4 specialization but are still limited to EM and thermal resist holes.