OK so I got a couple regular Station Containers (not the Audit kind…) but now I can’t repackage them to move them. I keep getting a message saying that there is a log entry less than 3 weeks old. Is this a new feature in the last couple of years? Because this never happened before.

And yes, I know there are Audit Log Containers, but these are not that. They are regular old Station Containers. I can right-click and view the market, and that’s what it takes me to.

Any thoughts here? I really don’t want to have to wait 3 weeks without touching them in order to move them.

It’s not new, they’ve been that way for pretty much almost forever.

If you’re in an Upwell structure, just name them something funny and Deliver To CCP Falcon. That’s what I’ve been doing with mine. 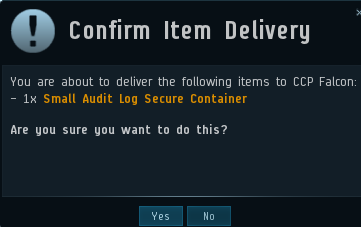 I think, even packaged a station container is around 100k m3, not worth moving it.

The Station Containers are audit log containers even though they do not have the word ‘audit’ in their name.

I thought I had read at some point of a person using contracts to wipe the log and repackage them successfully, but I can’t find where that method was detailed so it may be my imagination. The best runner up I could find was to contract them to an alt and then biomass it, if you truly want them gone and don’t want to bother anyone else in order to get rid of them.

You can also give them a descriptive name indicating when the 3 weeks will be up and repackage them then, if you are willing to tolerate their continued presence for that duration and don’t want to commit the safe date to memory. Failed attempts to repackage generate log entries and reset your waiting period. (Probably not the option you want, but someone searching in the future may.)

They’re only like, 10k. Still a pita though.
You might be thinking of station vault or warehouse containers