i found it unfair that the timer continues. maby it has todo that the instance will be resetted after the server so ccp wants to denie that a disconnection would save the ship?

does ccp want to creade that instability or do they simply ignore the disconnection/timmer issue?

This suggestion has popped up over the years multiple times.

If players can gain an advantage by ‘disconnecting’ from the game, it’s really easy to ‘accidentally’ remove the internet cable at a time of your choosing. Many players will do this when given the opportunity, so CCP needs to make sure to not give them this opportunity.

Once you pop a filament you have 20 minutes to make it out alive. If you cannot do that, for whatever reason, you die. Disconnects are unfortunate, if it happens more often it could be a good idea to take that risk into account for your risk assessment when deciding how much ISK you will spend on your ship to run the abyssals.

As Gerard said, it would be abused and exploited. This is also why the log out timer was implemented years ago because players would simply pull the plug on their internet connection to get out of a gank or keep from losing their ship to NPC’s…

I agree with what you said, but how about a compromise…

Ditch the timer altogether and get rid of boundary deaths (so that moving ships don’t die from them when they DC). To keep the instance/grid small, you can make it a cavernous space (like in the Aether Wars test), or even make space wrap in on itself like the gopher level in Hypberbolica (which Errant Signal described as nauseating and awesome). However, in exchange for this, other players can follow you into your trace, and there are no PvP restrictions inside.

Of course, this would also throw off balance because people could bring more than 1xCruiser, 2xDessies, or 3xFrigates. So, something might need to be done to address that (i.e. the final outgate won’t open until only 1/2/3 ships remain within the instance).

I dunno. I haven’t worked out all the details. But, I would like to see the removal of this PvP-free zone.

Or, you know, we could add more PvP-free PvE content… because that’s what Eve apparently needs. 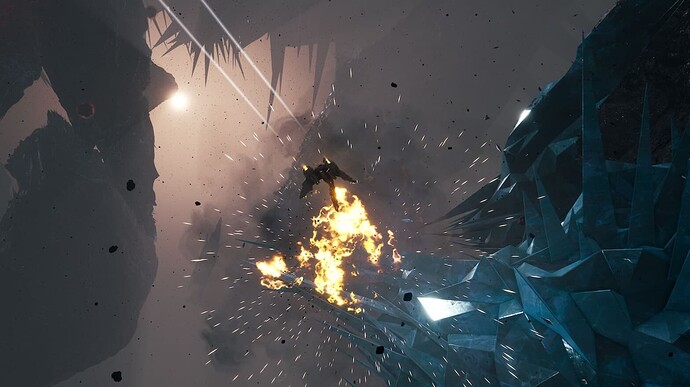 Hyperbolica is kind of tech-demo-ey. Different levels experiment with different mechanics (shooting, flying, platforming, a maze) in non-euclidean space. Video is timestamped to the gopher level.

Of course, this would also throw off balance because people could bring more than 1xCruiser, 2xDessies, or 3xFrigates. So, something might need to be done to address that (i.e. the final outgate won’t open until only 1/2/3 ships remain within the instance).

I dunno. I haven’t worked out all the details. But, I would like to see the removal of this PvP-free zone.

The ship limit in abyssals is pretty good, as that is the reason CCP could make challenging PvE, that otherwise would be solved by throwing more ships at it.

The abyss does that pretty well.

Your idea for example (continue only when below a certain amount of ships) could easily be exploited, by bringing a bunch of very cost effective throwaway ships to make the content easy enough to get the rewards, but then sacrifices itself in order to get the group to continue.

I too dislike this PvP-free zone, but it isn’t completely PvP-free: these sites happen in space, leave a trace and people need to return to that trace once they’ve exited the site.

Those traces are what link the abyss to the real universe and are the point of potential interaction with other players. And people are certain that ships return on a trace within 20 minutes (after all, there’s no way to stall abyssal timers and rightfully so) so there is a risk to running abyssal filaments in space.

There are a couple design flaws of it though, that I would like to see fixed:

Because of these two flaws, abyssal filaments aren’t nearly as interactive as they should be, because people can just avoid all interaction if they know how. There is a counter to point 2 (plant an anchorable next to the trace, new trace can then not be popped because ‘too close to anchorable’, but that can be avoided by running sites in newbie systems which do not allow anchorables…)

My solution to fix those issues with abyssals is:

(Slightly related: a filament activation delay is something I’d like to see added for all filaments by the way, not just the abyssal filaments but also including the travel filaments. Travel filaments can currently be used to escape from combat situations or to travel through Pochven without risk. Adding a 40 second delay means people can be chased, combat probed and stopped before they teleport out of system. It would change nothing about the travel mechanics, but would add some risk to using it while in a hot system.)

Why do so many people who claim to want more PvP spend so much time working out ways to attack people doing PvE. Why don’t you talk to each other and work something out?

You do want PvP RIGHT?!

“Why don’t all the PvP players just PvP eachother?” you mean?

EVE is not some PvP arena game where you are thrown into combat against an enemy team.

EVE is a large universe with resources players can fight over. That means you can get cat and mouse gameplay of people who wish to gather resources and other people who want to catch the people gathering resources. And that interaction creates the basis for environment in which players and groups can fight for territory, for resources, for safety. And people building modules and ships to replace the modules and ships that get lost in the fights. Which creates the demand so that people risk their ship in order to gather the resouces.

So, if you say ‘why don’t those people just attack eachother rather than that they try to attack the people gathering the resources’, your understanding of the basis of this game is basically zero.

Sincerely, someone who sometimes plays the cat but also enjoys playing the mouse in EVE.

when i disconnect in an l4 i get savely warpd out.

idk if ccp wants to prevent that a disconnection would save a gila next to the server reset? it still would be a 1 day delay…

my internet often disconnects and need 3-4 minutes to reconnect … so i alrdy lost more than 5 ships and ccp in first was and now not reamb the ships i lost.

if that continues i will stop play abyssal. its not because of that i get maby 1-2 disconnects each month so i loose 1-2 gilas eahc month its mostly because the supports to inbound disconnections as part of its policy while they have savetyfuctions like in t4 but they just wont use them for abyss -.-

Abyssals are meant to be difficult. While you have shoddy interwebs, what would stop someone from just unplugging theirs to keep from dying?

What about Stop abyssal timer if disconnected

when i disconnect in an l4 i get savely warpd out

To be equivalent to an abyssal, upon logoff the trace should open up to let other people enter the room where your ship is.

Just making the observation that a lot of people complain there aren’t enough easy targets for them. You are one of them.

Nowhere did I say there there aren’t enough easy targets for me.

All I said is that this game requires people to be out in space, engageable, as a basis for this game to function.

A hostile universe that’s all about player interaction and an arms race between ships, fits and strategies even when you’re just gathering resources in order to replenish the materials lost in that same conflict would stop functioning when that conflict and PvP becomes opt-in.

And that when people ask for means to indefinitely stall their instanced PvE combat while waiting for the hostile players to go away as means of a PvP strategy, it is breaking those basics upon which the game is built.

Nowhere did I say there there aren’t enough easy targets for me.

people are forced to suicide-gank you

when they hide in high sec.

What did you mean by this if not that it’s difficult to kill them?

people can just avoid all interaction

filaments can currently be used to escape from combat situations

delay means people can be chased, combat probed and stopped

I eagerly await your reply.

You must have missed what I said. Again, nowhere did I say that there aren’t enough easy targets to kill.

There are plenty of easy targets.

However, I also do believe that activities in space should not be without PvP risk, without potential points of interaction. That’s what I’m saying in the parts you quoted - it is not that I need more easy targets (there are plenty of easy targets already), but I say that because I believe flying without risk shouldn’t be easy either.

For example, if it is possible to stall abyssal timers it would be way too easy to never get killed by players while doing abyssals.