Unless you are looking for very rare ore and are so glad when you have found something that you wish to mine it all no matter how long it takes, you’re better off using T2 mining equipment.

In some situations, such as expensive moon ores, you may want to use more efficient equipment instead, like T2 with type A crystals instead of type B. Or T1 equipment for even slower yet even more efficient mining.

Wastage is an unnecessary complicated mechanic, where CCP could have simply buff asteroid belts by, say 50-60-70%, instead of 100% minus waste.
And they could have still implement the new mining crystals thing.

Use a retriever or a mackinaw. The mackinaw has almost as large a ore hold as the porpoise. When fitted correctly you can also reach 50-60k ehp as well.

If it just mines faster than T1 equipment but results in lost residue, did I just waste my ISK by buying T2 equipment?

Wastage just forces you to ask: “Given a single asteroid rock, do I care about extracting every single unit out of it?” That’s it. Wastage does not affect your yield.

I put together a basic diagram here: Waist? Seriously? - #11 by Io_Koval

I’m flying a Porpoise, and use T2 mining drones. I can’t switch to mounted mining lasers because it doesn’t have the turret hardpoints needed. Should I switch back to T1 mining drones?

Wastage may not affect my yield, but it affects my yield-to-time-spent-mining ratio.

As for the Porpoise, I like having a 57,500m³ mining hold, which also affects my yield-to-time-spent-mining ratio by eliminating trips to and from the asteroid belt. Having an alt mine with a Mackinaw and dropping its cargo for me would be great, but I don’t want to pause my training queue so that I can start one with the alt. I suppose I could use another account altogether, but I just have the one computer.

Not sure what you mean by this. EDIT: as it pertains to waste.

A mackinaw has 44,300 m3 and a higher yield, guess you would have to dock a little more, but not much.

Wastage may not affect my yield, but it affects my yield-to-time-spent-mining ratio.

Without you going into the detail of how, I have no idea how you’re making this claim.

OK, this kind of gives me a picture. But your OP is asking about trading off between a T1 and T2 yield versus some (mysterious, to me) non-mining-time cost that wastage incurs in your ratio. The yield is quite significant between T1 & T2 and you are mining at that yield for so long (1.5-2.5 hours to fill the cargo hold?) that for wastage to reduce the ratio while giving you a higher T2 yield, it must be a significant time penalty. The only idea I can think of that results in a massive time sink (which would be required to reduce the ratio) is that when an asteroid is depleted slightly faster due to waste, you zig zag your drones across whole belts to inflate their travel time.

(Or that the rocks were scarce to begin with (ex: anomalies, moons), but we already covered that earlier with my “Given a single asteroid rock, do I care about extracting every single unit out of it?” suggestion, which means this isn’t it)

Also, are you using bookmarks? The downtime to make a dropoff trip to a station shouldn’t be more than 60 seconds for a belt 10AU or less distance away, maybe up to 100 seconds if it is some of New Eden’s biggest solar systems. When full, make a bookmark, warp to station, drop off goods, warp to bookmark, you’re right back to where you were.

I suppose I could use another account altogether, but I just have the one computer.

A lot of EVE players run multiple clients on just one computer. Love it or hate it, that’s just multiboxing.

The only people that try to use multiple computers (real or virtual) are Alpha clone multiboxers, which isn’t allowed and is bannable.

A mackinaw has 44,300 m3 and a higher yield, guess you would have to dock a little more, but not much.

Yeah. Like you, I am suspect of the math going on here to justify the Porpoise. If we assume no hyperspatial rigs, 10AU distance belt-to-station, and 10s to dock/unload/undock, and the miner properly making bookmarks to re-warp back into the belt without having to slowboat repeatedly from the belt warp-in, then that’s only a 47s downtime trip for a Porpoise (2.7AU/s), and only a 40s downtime trip for a Mackinaw (3.3AU/s). And somehow, the lower yield of the Porpoise would out-perform the higher-yield faster-warping Mackinaw because the latter is too busy spending time hauling “too much ore”?

By yield-to-time-spent-mining ratio, I mean that if I have a drone mining for an entire cycle and it results in a complete loss of all materials mined in that cycle, I have wasted the time spent on that drone’s entire mining cycle.

By yield-to-time-spent-mining ratio, I mean that if I have a drone mining for an entire cycle and it results in a complete loss of all materials mined in that cycle, I have wasted the time spent on that drone’s entire mining cycle.

Thats not how it works.

That isn’t how waste works. The waste is removed from the rock separate from your yield. The only time you would have a wasted cycle is if on the last cycle of the rock, you hit your waste probability and it accounts for what is left. This is because waste is taken before yield.

In all other cases, you will always get your normal yield.

I regularly see messages like, “You mined 868 units of Concentrated Veldspar with a lost residue of 868 units.” See the attached image below. 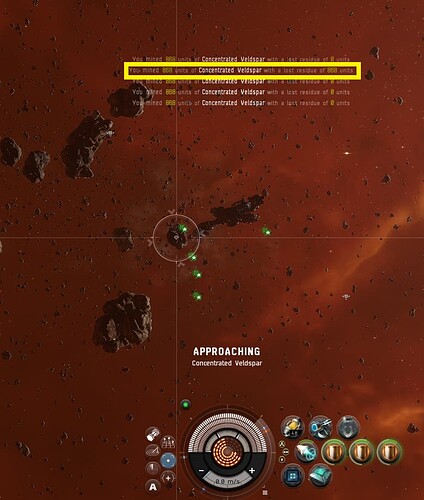 but you still got 868 Veld, still full cycle yield. The 868 residue goes from the asteroid to the great void.

Really? That seems like an odd way to express that. I just assumed that the drone lost the 868 units that it mined.

Yep, the whole concept is a little confusing. I think the original intent was to do something similar to the refining changes years ago, where you get more with higher skills, but enough people complained that they change T1 gear to 0% waste.

Nope, it says what it did. You mined an X amount and also wasted an Y amount. You gained X, and the asteroid lost X+Y ore total.

With type C crystals it’s even more fun as you can mine like 50 in a cycle and waste about 1500.

Well, I guess now that that is cleared up, I’m mining at optimum efficiency (for drones anyway), thanks.