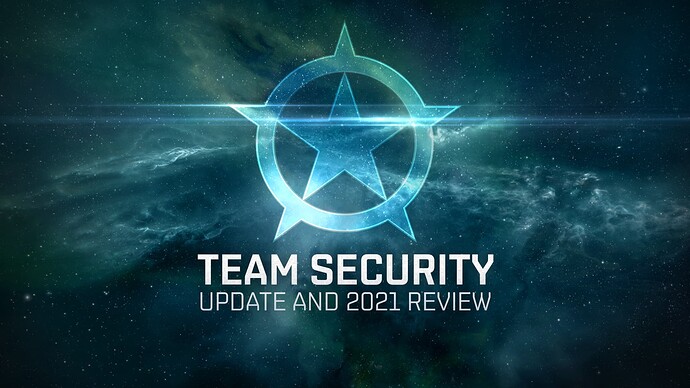 We have released an update from Team Security on everything that has been going on in 2021!

Please use this thread to discuss the development blog and ask questions to the team.

Hey guys! Quick heads up - on 19 July at 15:00 UTC, we‘ll be hosting a Q&A with members of Team Security on the discord server, where CCP Aisling and CCP Stinger will answer your questions about the fight against botting and RMT in EVE. Submit your questions in the #ask-ccp channel. Deadline for question submission is 18 July. Only questions relevant to the topic will be considered. We will also not be discussing individual tickets, if you have an outstanding one we encourage you to contact the Player Experience Team through our official support channels.

can the report bot in-game option be extended so we can add extra info to it ?

Wellim was tackled by frat related bomber bots im made a ticked and was slaped by use ingame bot report feature. The guy im reported get 7 days ban updated the bot scripts and laugh and fly like nothing happem.

How im know hes a botter cause ship he tackled and dropoed was pvp bate carrier. Every single bomber warped out in tick perfect when my fighers agreesed it after a few F1 perfect warp outs it was totali obvious.

So in aligned targeted all bombers who waspointing me and spam f1 all warped out and im docked.

This guy still up today use bot to find targets and bot dps to kill broadcasts.

Howim know that? Same characters as before and no you cant manage 20 bombers all at once

Sk qestion is why this person wasnt permabanned long time a go and why we players cant even report this obvious booting behaviour. You know that report bot feature iznt telling yoz nothing

This is absolutely something we’ve been looking at, especially in the past year. I can not provide the exact timeline for the rework and/or any change, but it’s one of the work-in-progress projects. We do want to make it much more useful for you guys, and for Team Sec as well.

Thank you for your post and explaining the situation that you have encountered.
However, your description does not exactly point to a BOT being used.
What you are describing looks more like input broadcasting, meaning that players can pilot multiple characters (aka multiple ships) in the same time. While the BOTs that are around are very sophisticated, they are still not able to participate in PVP to the extend you are describing.

So in this case, there was an actual player involved who was doing input broadcasting. Is this a violation on EULA and TOS, yes for sure. But the best way to bring this to our attention is to submit a Support Ticket and provide all the details that you can:

And the GM’s together with Team Security members will investigate the issue and take appropriate actions. So yes, input broadcasting still remains a violation of our EULA and TOS.

How much of this data involves false positive bots you [temp] banned because they fit a pattern of "Ratting X hours a day every day in the background using shiptype:[ishtar] in a manner indistinguishable from bots because the activity is drop drones, kill stuff, keep an eye on local, warp when something comes into local?

I want to farm officer modules i want to do this with an ishtar but this requires having activity similar to a bot without being a bot. A lot of PVE activities in eve are like that. People are telling me don’t use an ishtar and yet it’s the best tool for the job. It should not be illegal to fly a shiptype in eve.

Because i’ve had this negative interaction and it was a pain in the ass to clear my name or at least as well as policy allows in this case. A lot of people have this negative interaction as well without botting software. So there is problem with the data and it calls into question the effectiveness of your resources because the real bots aren’t being caught and dealt with swiftly but there is still a lot of collateral damage from long term players getting fed up with it.

Hello and welcome back to the forums, I have been expecting you.
Its not as simple as just looking at the hours of activity per day and locking and what ship type is being used and deciding if this is a bot or not.

Team Security changed a few things when it comes to bot detection. Now we investigate the bots (or the characters that are controlled by an automation) much more deeper. We consider multiple things before making the decision to take action or not and if we take action, what type of the action do we want to take, do we remove that specific account immediately and forever from the game or do we issue a temporary suspension to send a message.

This is all done to make sure we do not punish actual players. We are working very hard to make sure there are no false positives. Because a false positive suspension from the game is very bad for everyone as this would mean the following few things:

So in the end, a false positive ban just costs a lot of time from multiple members of Team Security, the time that needs to be used for stopping RMT, Credit Card fraud and hacking.

And that is why we work very hard to issue bans where we are sure the situation warrants a ban.

Do we still produce false positives? Yes, unfortunately, this still can happen. But it is much less compared to previous years, just because we adjusted our procedures and got better tools to support us in our daily tasks. And if this happens, we are doing our best to resolve the issue (in this case the support ticket) as fast as possible and leave the player happy.

I understand your frustration, but the data sometimes shows a very clear picture and sometimes the situation is in a gray area. We try and do our best to make our players happy and keep the bots out from New Eden.

This question was also asked on the Team Security panel and here you can watch the answer to that question: EVE Online I EVE Fanfest 2022 – Team Security Q&A

How im know hes a botter cause ship he tackled and dropoed was pvp bate carrier. Every single bomber warped out in tick perfect when my fighers agreesed it after a few F1 perfect warp outs it was totali obvious.

So, fleet warp is a thing, legit players take bait all the time, and there are legit players that multibox even more accounts than that. Of course, he could very well be a botter/macro user, but nothing you said here is proof of wrongdoing.

You might want to clarify that what he’s doing might be input broadcasting, but not necessarily so. For example, Ancantes thought all the bombers warping out at the same time was evidence, but that ignores the fact that fleet warp is a thing. Moreover, it is actually possible to control 20 accounts at the same time legit (and even more). Of course, there are limits to how many inputs a player can make in a given amount of time, but things like smart hud arangements, client stacking, hotkeys, and fleet warps can allow players to attack with many clients in an extremely short amount of time. 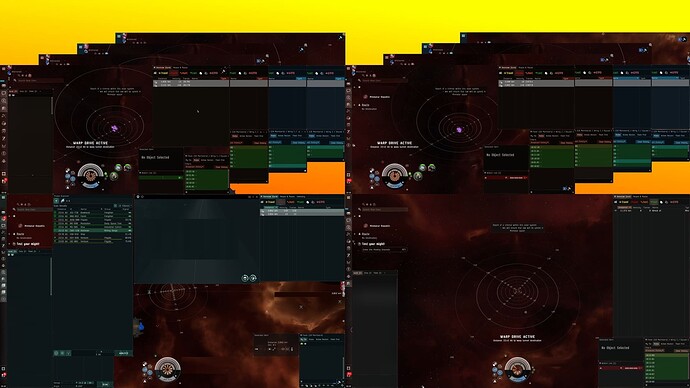 Hi Iceacid!
I assure you that selling and buying ISK is always always visible, the patterns are very clear for Team Sec members and those are never really a grey area. If her Majesty Saviourette of Highsec Queen Aiko are not involved in any of this nastiness - there is nothing to worry about, that I can tell for sure.

Thanks for doing this post, all. Transparency is difficult when it comes to what Team Security does, but I still think it is necessary so that folks know that their reports and complaints about cheating in the game are being acted upon.

Thanks for doing this.

It’s hopeful to see that action is being taken against bots and RMT scams!

i wanted to raise issue with false positives caused by brand-new keyboards/mouses that CAN potentially trigger the macro-detection and result in account suspension. this issue still happens but is quite rare but still does happen.

Actions are definitely being taken, it’s just sometimes they are not as visible as you guys might hope, but there are good reasons for that. We do have to keep this balance between sharing the results of our work and making sure that our methods are kept reasonably hidden. That’s what makes it difficult sometimes.

We do try to eliminate false-positives. It’s a massive work and it requires many small adjustments that we have to do on the go. Also, it’s important to remember that the bans can be treated case by case. If a player think that their account was banned falsely - we always encourage those people to send a ticket to Team Sec and one of us will have a look.
But some actions that we see can not be performed by human, is it simply impossible and we see that with the help of our tools. Personally I wouldn’t recommend using any features of the equipment/any software if you are not sure that it will not trigger the investigation eventually.

Thanks! We would love to have more opportunities to have this sort of… dialogue with all of our players. I think it’s super important to let everyone know that we are also humans behind those decisions (which are sometimes very tough) and we genuinely want to make the game safer and more enjoyable for everyone.

Hi there, any input regarding the state of Jita’s local ?

I’ve been called bad for inadvertently blowing up noobs-in-Ventures, but these RMT-ers, botters, hackers, and what-not, take bad to a whole new level.

I’d no idea the numbers were so significantly large. Thank you for being frank about the issue.