The "new" Ahbazon solar system nerfed my business. From 16 jumps to 52 jumps to Jita if I want to avoid lowsec

Returning player here. I had some awesome business manufacturing stuff in a semi-quiet place then selling stuff on Jita, it used to be 16 jumps, “okay”, now this new system that apparently was created some months ago, nerfed it all. I almost lost 1b isk fortunately I escaped. Buuuuuuut… not worth the risk. And 52 jumps is a joke.

This is serious business now I need to find a new headquarters, grind standings for the desired NPC, move aaaaaall muy stuff, etc. 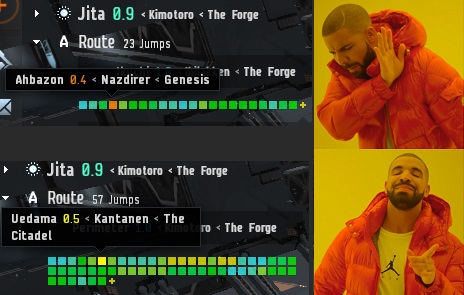 Not Ahbazon nerfed your business, CCP did by killing Niarja intentionally. You can actually be “happy” (CCP Rattti would definitely argue that you should be) that CCP reintroduced a shortcut for these 45 jumps.

I used to be able to make good money selling bookmark packs, then CCP nerfed my business by allowing players to warp to zero on gates.

I suppose I could chase new strats and opportunities, but I’d rather complain that CCP had the audacity to try to make the game better.

you don’t have to grind the NPC standings. you can pay to have that done, while you are doing whatever else you wanna do in game.

It didn’t nerf your business, it boosted it. Longer travel times mean bigger price differentials, because less traders are willing to put in the work, increasing the amount of available opportunities for those who do.

Have you tried not being lazy?

The players nuked the system. Not CCP.

Search for an A641 HSHS WH to reduce jump count.

I find these often and it can reduce the amount of jumps safely.

They last about a day and can take very large ships.

Anyway, look for other markets rather than sit and compete on moving the price in Jita constantly.

Well that is your mo, you defend not only T2BPO’s but other continuing shitshows.

Not sure what you mean by defending T2 BPO’s. I think the lottery system was a terrible idea. But you can’t take them out now without ■■■■■■■ people over.

Now, as for defending “shitshows”…

First, CCP should not stop trying to add content or make the game better just because changes might require that some players adapt. And, to be clear, I stand by this statement even for cases when CCP tries and fails. 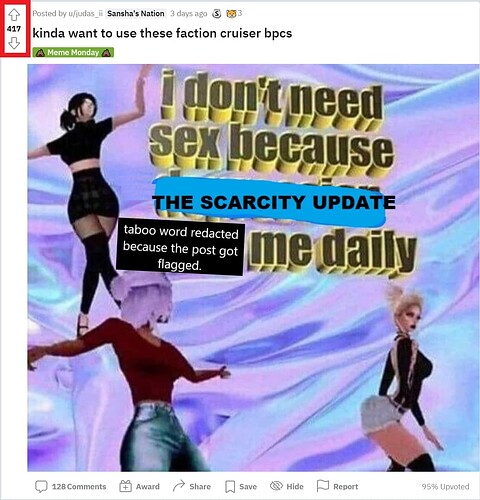 Second, 80% of the players complaining about getting screwed over are really just a bunch of whiners who throw a fit at the slightest bit of diversity, and I’m kind of tired of it. Case in point, take resource scarcity. So, many players complaining about it ■■■■■■■ them over, but the truth of the matter is that they are hurting under resource scarcity because they are failing to adapt. Personally, I saw resource scarcity as an opportunity to get wealthy. You see, early on during scarcity, I started hearing about billionaires increasing their wealth during the pandemic, and that we were experiencing the greatest transfer of wealth in human history. So, I started thinking to myself, maybe I could do something similar in Eve Online. Maybe I could use resource scarcity to dramatically increase my wealth. Well, I am financially incentivized to keep my mouth shut, but I will say this. If you did not dramatically increase your wealth during resource scarcity, then you have no one to blame but yourself.

Now, I do have sympathy for newbros who feel like they’ve had the rug yanked out from under them just as they’re managing to find their footing. And I know that there are plenty of casuals out there that aren’t looking to dramatically alter their play styles in order to chase new strats and opportunities. But, for everyone else, I promise you that you’ll find a hell of a lot more success, and have a lot more fun, if you spent less time bitching, and more time trying to figure out how to use change to your advantage.

First, CCP should not stop trying to add content or make the game better just because changes might require that some players adapt. And, to be clear, I stand by this statement even for cases when CCP tries and fails.

That post completely ignored that pirate cruisers except the Cynabal, Ashimmu and Gila are profitable to build. Even if built on 4-4, Phantasms are ~70m profit before market taxes.

As for OP, the geography you were used to only existed due to the removal of the highway gates waaaaay back in Eve’s history.

The scarcity update fucks me daily.

This kind of makes me wonder, if the group camping Ahbazon would accept Isk for safe passage. Could be a mutually beneficial exchange

Oh. Yeah. You’re the person who is obsessed with T2 BPOs and doesn’t do any industry to have a concept of how little they matter.

It’s Brewlar’s alt. That is all you need to know.