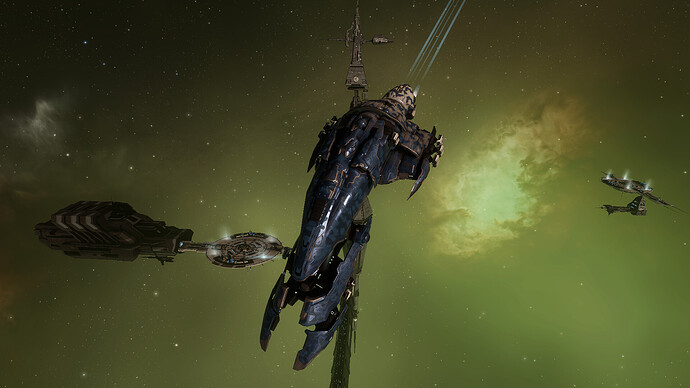 I love how much better the forums experience is when you have identified the true trolls and squelched them.

I agree about the death penalty, but I think T3C needs something else to make them more worthwhile. I wonder if they have ever looked at converting T3Cs into a similar system as T3Ds, with mode switching rather then subsystem fitting.

This is what I use mine for. I adore all 4 of them, even the clunky Proteus.

The t3c was my biggest in-game goal after I went all in on SB’s. 10 years ago. I’ve stuck with my Legion through thick and thin, even when they were considered the poorest of the class for many years. I even tried to goad ccp into naming one of their meeting rooms The Legion. Alas, it didn’t happen…

I fly all 4 of them, on occasion. Because of the LP penalty on loss it’s almost always for PvE, especially for the events, where I like to compete with the cookie cutter praxis (I lose on the boss, usually). The fact that they were involved in fleet doctrines or overly popular for solo hunting (Loki) made ccp change/nerf them. Currently, they really are the swiss army knife in the ship tree, rarely excelling but usually quite good.

Why they incur an LP hit is unclear, perhaps because they allow a variety of game play (ship roles) before one spends SP on the specific hulls for specific roles (combat boosting, logi, …). But that is only for hulls, the rest of the SP needed for each role is the same. In that sense the LP penalty is overly harsh, but less harsh than the one we received for forgetting to upgrade our medical clones. If that penalty would be scrapped, it wouldn’t be too soon. The changes to nullification, and it’s consequences via the new mods are overly harsh on the t3c’s, reducing their usability even further with the risk increasing.

I wonder if they have ever looked at converting T3Cs into a similar system as T3Ds, with mode switching rather then subsystem fitting.

I hope they did, and then tossed the idea aside for good. Puzzling with subsystems and fits on the t3c is more than half the fun, unless you only use published fits, it’s their whole purpose. It’s also one of ccp’s headaches, as they are very difficult to balance across all subsystems without losing functionality. That is probably the reason why t3d’s are the way they are, interesting, performing and also less of a rebalancing nightmare.

I don’t even fly one, but I agree the SP loss needs to go.

Where it up to me™, capsules would be indestructible, but have no overview past stations and gates and no camera drones. Just one little portal to look out of. But any loss of any ship will damage or destroy implants.
That way, everybody gets to share the love of implant loss, but no using the clone vat as a quick spawn point either. You lose your ship, you slowboating back to the hangar in shame.

With the latest T3 nerf, this penalty is beyond ridiculous–unless CCP is just looking for a way to sell skill injectors. END IT NOW.

He’s not entirely wrong this could very well be part of the equation. If someone is going to rage plex, the loss of their ST is as good a time as any.

Just out of curiosity, is a Legion capable in other roles at all other than raw PvE?

I used to run a nullified cargo smuggler back in the day when the Drone Lands were a thing, that was fun and encouraged me to see the other possibilities in the ship.

I mean, I got Legions and Tengus in my stockpile, but I just never seem to want to get in em aymore. If I even consider doing a pew, the Sacrilege is still my go to

capable in other roles at all other than raw PvE?

T3Cs can fit into any role (logi, HAC, scan) which was the purpose of t3, but in any role now they are just expensive hulls will little to no added benefit.

I shouldve seen that coming lol

Switch “capable” with “Good” or ideally “fun” I guess.

Eh its all subjective anyway.

I only really use mine for various pve applications, but in my experience the Legion is well rounded but not at the top of the pack for any specific activity. It’s on the lower end of the damage out of the pack, but the higher end in terms of application with slightly above average fitting resources. In pvp you want a Loki or (distant second) Proteus. A web Loki and a scram Proteus working together are a frightening hunting pair.

In pvp you want a Loki or (distant second) Proteus. A web Loki and a scram Proteus working together are a frightening hunting pair.

it can do a fair bit of logi, in cloaky pvp fleets, and is excellent at neuting - you can hunt stratios with it, lol, and perhaps even lokis. The HAM setup is a bit disappointing though.

If you’re really interested in Legion for PvP, have a look at Fit Kitchen: The Legion » Ashy in Space although she may have to update now with the nullification changes.

I think the Tengu is by far the best of the lot for pve. I suppose this could make it good for pvp too, if somewhat limited by support system bonuses. It has excellent fitting resources, durable shields, and is reasonably fast.

Keep in mind my take on them is strictly pve. pvp applications may be different in a way I’m not familiar with.

Legions are great T3C killers because of their neuting bonus. Most T3 cruisers use an active tank. Legions are awesome for creeping up to someone to neut.

Uh doesnt that mean they are terrible at killing Legions though?

it’ll depend on the other legion’s fit.