i have gotten to lvl 80 in project discovery on my main account. and with 99% (the highest percent you can get) i make 99k every time i do an entry. i can easily hit the max of 5 entries a minute. this means that i can make 495K isk per minute. while i enjoy all this free money i cant help but think that this has to be one of the biggest isk faucets in the game. since theres no taxes and anyone can do it. (yes there is a limit of entries per day but multiple accounts makes it easy to do all day if u want). so im just wondering what other people opnion on this is because i feel as if it needs to get nerfed cause any new player can be making 495k isk per minute without even needing a ship or experiance. and probably one of the biggest things that makes this broken is i can rat nullsec while doing this so i can make nullsec ratting money with an additional bonus from project discovery. 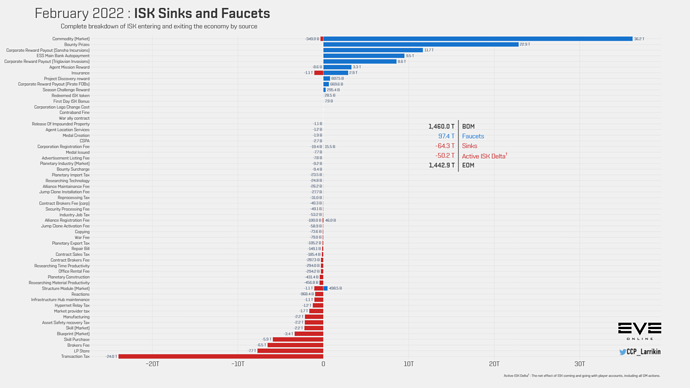 So basically selling ore, what a fun varied game.

The data for Discovery doesn’t include the value of the prizes just the ISK? There’s some big ship value there so it might be under estimating the faucet size.

So basically selling ore, what a fun varied game.

That’s what you think that is? Seriously?

No. Not ore. Ore is not bough by any NPC corporation, only by other players.

Commodity (Market) is whatever NPC corporations are buying, thus pumping ISK into the economy. This is mainly Sleeper blue loot and Triglavian red loot.

A new player is subject to restrictions - they can do a certain number of samples per day, if my memory serves me right Alpha is able to get 5 PD reward boxes. Omega for a change can acquire 6-7 boxes.

A new player also has a limit of PD levels to gain. Alpha will not go above lvl 150, although he can still earn money. Omega does not have any limits.

The problem, in my opinion, is the lack of consequences for careless sample making - in the previous edition of PD (Exoplanets) for wrong answers the level of accuracy decreased, so making samples carelessly, quickly - it brought less income. In the current edition, once you’ve reached 99% accuracy, you can now completely misselect areas and click “submit”, just to be faster. This problem was raised by the game’s community at the beginning of the project, pointing to the ease of automating the whole process. Furthermore, a questionably moral aspect associated with this procedure was pointed out, namely the quality of the data collected by CCP and submitted to the data processors in order to find a vaccine against the virus. No one at the CCP seems to have been particularly concerned about this… and now it no longer matters, since the vaccines have been developed.

Anyway, for me PD is an interesting option for new players to earn money relatively quickly to buy new ships, equipment, ammo or skill books. Maybe it makes them more courageous to face new challenges in the game (a trip to WH? to lowsec to get minerals or gas? first steps in PvP for example in FW?) and difficult moments (losing a ship due to a mistake during a fight with an NPC or becoming a victim of gank attack), because always doing PD makes it possible to earn ISK in a different way than sadly switching to Venture and mining Veldspar.

Well easy to see that I was wrong about the faucet thing. Maybe it is because a lot of people underestimate it but who knows I’m happy with how much money it gives me and if it doesn’t need a nerdy then that just means more money for me. But ya as a efficiency of 99% person I can tell u that 90% of the time I just do a small triangle because ik what ones are graded and not graded by this time so that needs to get fixed

I wondered who was buying my Civilian modules.

I just wish we got to have faction events for the colonization of said systems as per the lore tie-in.

Exoplanets was my favorite as well. The minigame itself was fun.

Yep, I liked the exoplanets too. The one before that wasn’t bad either.

Current version is a bit bland. Unlike the previous two versions the connection to the real application is missing a bit here, we’re just grouping clusters of dots now.

The data for Discovery doesn’t include the value of the prizes just the ISK? There’s some big ship value there so it might be under estimating the faucet size.

The non-ISK prices that project discovery adds to the game is not an injection of ISK and therefore not included in that graph as either ISK faucet or ISK sink.