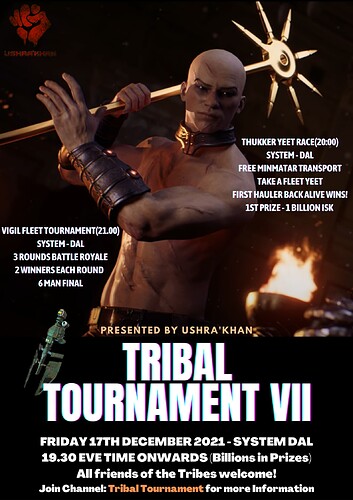 The Tribal Tournament is a Celebration of freedom and reminder to those still in chains they are not forgotten. The tourney is open to all supporters of freedom within New Eden, Members of the Tribes, their friends and allies.

Details of each event below, Hope to see you there!

When: YC123 Friday December 17th - Race starts at 20.00
Where: Starts from Dal VI - Moon 1 - Republic Justice Department Tribunal
What: Grab a free Minmatar T1 Industrial (ships will be handed out and all with have same fitting) racers will be yeeted to null sec, race to a mid-way system(announced on night) then race back to Dal. First Industrial Ship back alive wins! Extra prizes for any killmails!

When: YC123 Friday December first round starts at 21.00
Where: Dal VI - Moon 1 - Republic Justice Department Tribunal, Exact arena location revealed during event
What: Vigil Fleet tournament. 3 rounds of Battle Royale in a 30 km arena, 1st and 2nd from each enter into a 6-man final round.

Free and open to ALL who support the Matari people and their fight for freedom.
A system will be in place to stop pilots losing sec status/standing, This may put your pod at risk.

It’s not really any of my business but it sounds like you kids should have a lot of fun with this event.

Can highly recommend this. Was a lot of fun last time around.

I wonder who did that last time… (Looking at literally all of SoERR).

Meanwhile, some idiot - identity lost to time and history, of course - juked two bubblecamps and a lowsec gatecamp to arrive at location in hull… almost after the brawl was supposed to start.

Who would do it in such an old-fashioned way? 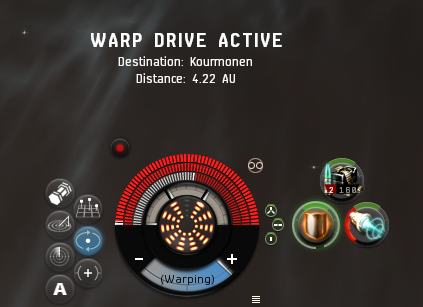 I missed the last one, but I was in the one before. I can definitely recommend the event and hope to make it this time!

I wonder who did that last time… (Looking at literally all of SoERR).

I mean. Given we use the Sisters’ stations for HQ, it would be weird if we did not consider it to be on a valid route, no?