[Triglavian Invasion] Join the fight for New Eden, reshape with galaxy with The Triglavian Initiative!

The Triglavian Initiative needs you!

Hundreds of pilots have been locked in battle across the four empires. Take part in this unique one-time event where you, a capsuleer, have the opportunity to change the map, and the future, of New Eden.

The TRIGLAVIAN INVASION, provides capsuleers with the opportunity to permanently change the security status of star systems and reshape the map of New Eden. This style of game-play, in which high-sec and low-sec systems can be brought under Triglavian control, creates star systems found nowhere else in the game. Gate guns and station guns turn off, concord and faction police leave, and we are left in a glorious sight of the stars reaching Final Liminality as we increase the Triglavian influence over the system.

Join us on Discord, we have a large and active community with hundreds of members. Discus fittings, strategy, role-play, and get to know some of the Capsuleers that have helped make this event as large and successful as it has been. Join one of the many corporations that have formed and grown as a result of this shared experience or participate on your own and carve out your own destiny.

Find purpose in the Flow of Vyraj and reshape the galaxy! 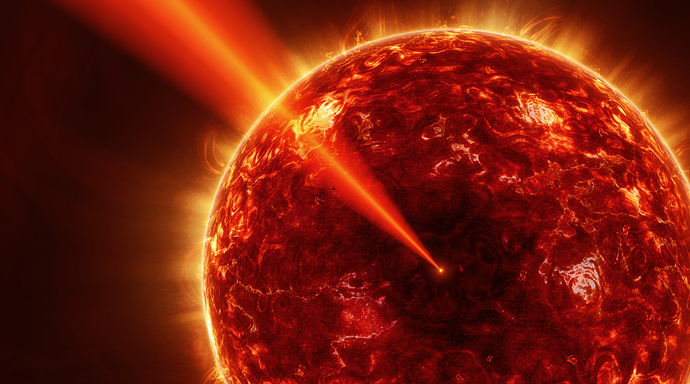 Do you mean people should join a group that runs from a system just because they managed to push to down to 30%, then Edencom came along and pushed it back to 70% and it would not fall anymore?

Sounds like a good group to join: Reshape the galaxy for lazy people.

I could say the same from EDENCOM regarding Kaunokka. Outnumbered 3-1 we managed to push the system from 15% influence to Final Liminality.

To be fair, Caldari is really bad.

That means Caldari have only been able to secure about 4-5% share of all Edencom victories, including those Fortressed from Serenity. And given up over 70% of all Liminal systems.

Carry on, I wasn’t dissing your thread, just presenting the facts about Caldari systems.

You cannot say the same at all unless you apply your special Trig Logic™. You run from systems in high percentages to go for easy pickings or log off. Edencom stays until a system has gone to very low single digit percentages, even in Caldari systems. Not to mention that you run from high percentage systems while not even having to fear low sec when a system goes redoubt. Edencom has the added disadvantage that they need to change ships to adjust to low sec.

Edencom outnumbers TTI by 4:1 or 5:1 in most cases

Where? And even if that is true, it only goes to show just how badly CCP designed Caldari if being outnumbered 5:1 still does not give you victories, and even in Amarr, Gallente and Minmatar space it requires continuous, 24/7 grind from Edencom to secure victories. And even while we supposedly outnumbered you, an Amarr system almost fell, a Caldari system was just barely holding onto it but ultimately fell, another Caldari system was stuck. Clearly a show of how well CCP designed all of this. Thank you for clarifying that.

The Caldari State was given a nice present for “Union Day” at Komo. 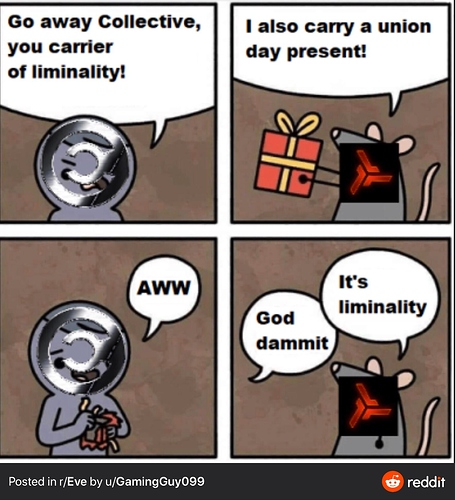 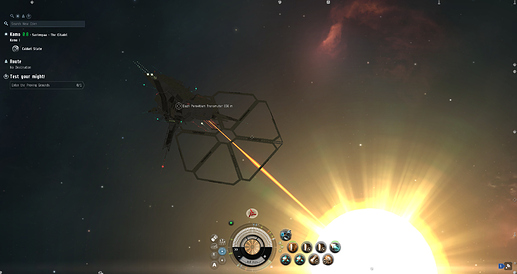 Glitched out for a bit, like Raravoss, though, before CCP Sledgehammer came in the system and switched on the red ambiance again. Gave me a laugh when I jumped in and the skies suddenly changed colour like a light.

You have been diagnosis with “edencom error 404, logic not found”

You need to take this pills that will help you your brain function better, Liminality Pills

The first time is free, after that you have to pay a caldari system for the next one

Kuharah has entered Final Liminality, the first Ammatar system to fall to the Collective.

Join the fight for change, join The Triglavian Initiative.

A new system, Ignebaener, has entered Stellar Reconnaissance, join the fight of behalf of the Triglavian Collective and reshape New Eden!

Ignebaener has entered Second Liminality, join the fight for the Triglavian Collective and conquer the stars.

gnebaener has entered Final Liminality , join the fight for the Triglavian Collective and conquer the stars.

Join the fight for Kothe and let this be the 25th Liminality taken by the Collective.

New Liminalities will be spawning soon.

Fight for the Triglavian Collective.