Trinary data camera footage astrolocation: Where is this Nebula?

Drifter trinary data links to a segment of camera drone data, slewing in azimuth left to right at a high rate of speed. There is a nebula briefly captured in the camera data: 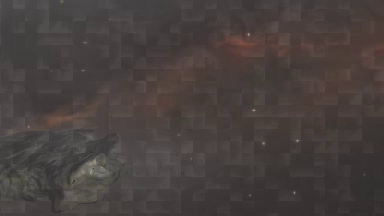 Consider this an official request to all astronomical experts: Is this nebula fragment in the known universe? Have we seen it in wormhole-space or New Eden before? Astrolocating where this camera footage was taken is of utmost importance as it may be related to recent Drifter behavior. There is a significant amount of stars also imaged, which might be able to generate a starfix given enough computational power.

The color immediately draws to mind the Red Nebula of the Minmatar Republic. The shape seems a bit off, but then again I spend most of my time in Gallente space.

Reminds me a bit of the short time I have spent in a wormhole.

Lower left side looks like jovian nebula. Upper right might suggest a perspective from Drone regions/Tribe space, Geminate maybe?. It’s been ages since I travel that part of the cluster. Time to warm up my cruiser engines and check it up.

“Jovian nebula” is way too focued compared to the rest, might as well be something from WH.

Edit: or it is a part of “angel shaped” nebula from Curse/Great Wildlands

this might be borders of great wildlands and etherium reach

I don’t think I ever entered Great Wildlands from that side. From where “the angel” shape is most visible? Scalding pass?

By the colour I would say it’s jovian nebula from the distance. So Geminate. Home of SoCT.

Maybe the red nebula is Anoikis? Meaning this picture is of wormhole space from close outside it.

I don’t think it’s Jove nebula. I visited Vale of Silent and Geminate, only Geminate has red nebula but it is on the other side. There is no jove nebula when looking from Kalevala Expanse only the remnants of Caroline Star.

So, part of the “angel” in matar nebula or something from the WH.

Good catching that Nebula highlight mister Soter. hopefully someone can identify the location. that group of bright stars can help in pinpointing it further indeed.

This looks like a dragon’s head, or some other reptilian form. The top center feature looks clearly like an eye gazing back at the observer. Perhaps a hint as to its location?