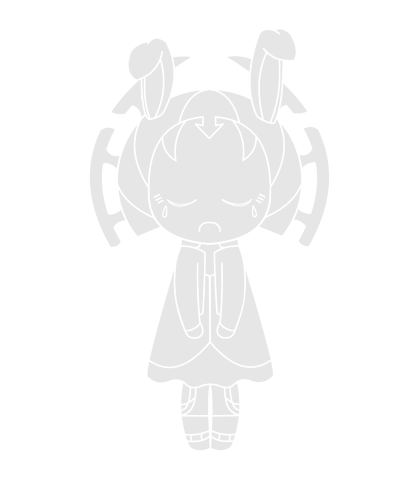 “Once again I’m forced into isolation… Why does this keep happening to me? Why can’t things just go right for me? Why are my actions continuing to result in people being killed? I’m left to just sit and process these thoughts over and over alone in the dark. Trapped in this suffocating room, letting fear consume me… I… I don’t know what to do! I just wish I had someone to talk to…”

“… I’m not sure anymore Mumo. Past few days have been… Hard.”

“You said something like that last time yet… I do feel it’s all my fault.”

"You didn’t strap a bomb to some guy and tell him to go blow himself up at your shrine!"

“Yet it is my very words that provoked it! I… I also feel responsible for the place being some cramped! So enclosed… I should have allowed for more space for seating! I-I-I should’ve invested in a bigger space! I… I didn’t consider something like this ever happening!”

“Well… Depending on where you live I guess, nobody wakes up in the morning and considers the possibility of a suicide bomber being a danger in their life. You account for actual plausible dangers, but these kind of extremes tend to… Sneak up on people… I-I dunno if what I’m saying makes any sense Suha, but what I’m trying to say is that it’s fine you didn’t suspect a suicide bomber - or just a bomb in general - being an issue.”

“You do look incredibly tired…”

“I couldn’t sleep because I kept worrying about another attempt on my life… Like the doors being blown open and men with guns storm in… Or I’d fall asleep and just never wake up. I… I don’t even trust the people standing guard.”

“The people from that dark Wolf Legion security force? I don’t think you have anything to worry about. They’ve been screened and everything. They seem highly professional.”

“What happens if all it takes is for them to be given some money to step aside? Or take me out themselves? I was sitting in here all night just holding onto this handgun thinking I was gonna have to kill someone to protect my own life.”

“You don’t need to do that Suha… It’s going to be alright. You don’t have to live in absolute fear like this… Y-You know, I’d figure you would’ve ‘taken’ something to take the edge of by now…”

“Y-You know what I mean… Something to lift your spirits… Blue Pill?”

“O-Oh… I… I refrained from taking any. I-I needed to keep my mind sharp, focused.”

“Well… Maybe just consider taking some to help you relax. I promise you nothing is going to happen, Y-You can loosen up all you want! It would help you get though this mentally…”

“It feels like I’d just be running from my problems…”

“All those people! I… I saw them all die in front of me Mumo! I spoke directly to these people. Some of them were even recurring visitors! I knew them directly by name! I… I lost people I knew! People who saw something in me!.. And my words ultimately got them all killed… This would’ve never happened if I just kept my mouth shut about those equilibrium cocksuckers and stayed in my lane… What would me tripping out mean to them? Hmm? That I just block out the pain I feel for the loss of their mortal life with drugs? I need to grieve, I need this to weigh down on me.”

“I understand your need to grieve, but you can’t be letting it destroy your mental state like this… You’re still holding onto that gun in your lap with it’s just me talking to you! Do you even feel unsafe with me around?”

“Please Suha… It’s fine to let your guard down.”

“Thank you… Do you feel better?”

“Emotions are a heavy thing to carry, keeping a guard up like that is bound to weigh pressure on your mind. I bet it feels liberating…”

“Hey, it’s what I’m here for… I… I do have some news you might find uplifting.”

“Yeah… See, I figured you’re gonna want to reopen your shrine again once everything settles. I don’t think the one you preached out of is gonna cut it anymore and… don’t think you’d want to go back there again. So I shopped around and find a perfect piece of space aboard the Rabbit’s Warren that be perfect! And… Like you mentioned, maybe should have invested in a bigger space, this is it. Wide open area that would allow for a wealth of unique arrangements. I went ahead and put down payment for it and secured it, we can look over details when you’re ready.”

“… I’m worried about whether or not I can keep doing this.”

“Don’t start this again… more so after I already spent the money for the place! I-I know you didn’t ask me to but, you can’t let this stop you Suha. I know you, and I know that once you’ve processed everything you’ll be your old self again and you can go out there and present yourself like you always have! And this time we’ll do it right! We won’t let this happen again. You have not only my word, but Avio’s and Utatis’.”

"Don’t mention it… Also there was something Utatis wanted me to pass along… I don’t know exactly what this is about, but apparently you had him track somebody?"

“Right… Well, he’s said something came up on the radar. This “Girl” he puts it, was recently arrested by station security. Something to do with marking someone’s business with graffiti and stealing from their trash.”

“Is this someone special to you?”

“She’s… Someone I’m concerned about for lack of a better way of describing it.”

“I… See. Well, Utatis should’ve sent you a message to your neocomm about it. Where you can find an address to where she’s being held if you wanted to go see her.”

“We could go do that right now!”

“You… You seem a lot more eager! W-which is good to see, don’t get me wrong. But so long as these EoM folk are all over the region, maybe you can stay in for just a tad bit longer… Also Utatis wanted me to stress that you should let her stew for a bit if you were keen on seeing her.”

“Seems rather mean to do…”

“Well the smarter option is to just lay low for a little while longer… I’ll send my people to bring you specifications on that real estate I purchased and help you work out a plan to furnish it. Sounds good?”

“That sounds great. Thank you Mumo.”