Don’t know if this has been posted before, but I am trying to add an account to Sisi. When I enter my credentials it takes me to the EULA section, but does not load the buttons to accept it. See the screen shot below for the issue. Any ideas on how to get around this? I’ve tried rebooting and that’s had no effect. 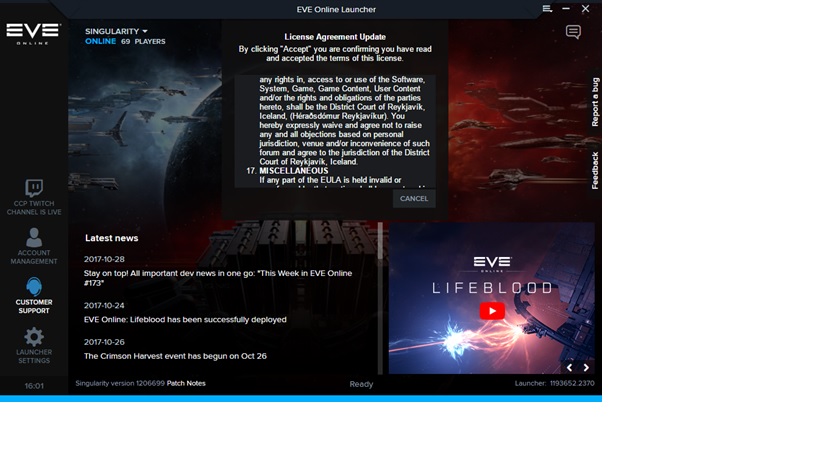 I think you and I are having very similar problems. I am attempting to login with Steam. This is not a new account that was not included in the last mirror, I have been testing on singularity for a while. I also get the EULA. Sometimes there are no buttons, sometimes I can accept the EULA. When I can accept the EULA, I am presented with a username and password login screen (that doesn’t actually fit in the window). The steam account login never shows up. I filed a support ticket, and went through all the steps they suggested, but it has had no effect on the problem. Just looking at the number of players online the last couple of days, I think this problem is more widespread than you and I…

Take it no one has a work around for this yet then?

I have found a work around to this problem. It appears that the display window doesn’t expand enough to show the Accept / Decline buttons. However, tabbing through the links on the EULA will eventually let you display the buttons so that you can make the selection and add the account to SISI

The dev version of the launcher has a fix for this (going out to beta later today).
However there seems to be another issue with the agreement, as for the time being the SSO will timeout once you hit the accept button. When that happens just open & close the settings, relogin and you should be good to go.

Edit: The fix for accept/decline buttons not being visible should now be on beta.
Also Launcher update coming tomorrow - 2017/11/08

It’s still getting the EULA problem for me, the buttons show but when I try to log in, it thinks my username and password are wrong which they aren’t. Every time I try coming back to it, the EULA thing pops up again.

What ever fix there was mustn’t have worked. The problem still happens and there’s zero chance of logging in.