Using a one-click to do double-click, is it a MACRO?

Basically, if you can’t do it as a human being, then you cannot assign it as a macro legally in game.

The simple freighter gank groups mostly are, there are often a few individual players to make it look less suspicious, but…

How do you know?

Been in a few fleets…

Is it legal to use a non-standard keyboard and/or mouse (ie DVORAK and a ball mouse) for EVE or does that count as a macro?

I re-purposed my mouse wheel to be a double click. Now tell me that is wrong, then tell me that Planetary Interaction setup of factory planets has nothing wrong with the 18 billion double clicks required by the game design.

I am pretty sure CCP can accept a double-click as a single input - which means ii wouldn’t be a macro exploit.

The simple freighter gank groups mostly are, there are often a few individual players to make it look less suspicious, but…

Did you report them? If not, why not?

Got answer from CCP:

Thank you for contacting the Player Experience Team. I would say that this is something you probably shouldn’t do. This would give you an advantage over another player would still have to double click manually. Though you may not have any piratical advantage, in spirit this is against the EULA. Now, mapping a key to do the same thing as another, for example, mapping a key on the keyboard to act like your left click would be ok. You would still have to double tap that key to get the same effect as double clicking your mouse.

So it is clear that you cant make so that one keystroke performing several keystrokes. In this case one mouse click performing more than one clicks is forbidden.

I don’t agree that this is a correct interpretation of the rules but as long as they rules are formulated as they are now, the double clicking shall continue.

I have problem with this answer.

The “only” legal way of using macros is by having it press any combination of CTRL, ALT and/or SHIFT + Key.

EULA is phrase the way it is because you are only allowed to do 1 action per key press.

“CTRL, ALT and/or SHIFT + Key” is two keys being pushed for one action, if a macro is used, then instead of pushing 2 keys one only needs to push one.

You own a DVORAK?

Man! Respect!
Awesome keyboards, I still need to get me one! 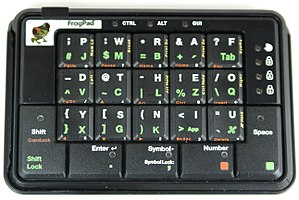 FrogPad is a small chorded keyboard about the size of a numeric keypad that can be used with one hand. It was produced by Frogpad Inc. The keyboard is optimized by character frequency. 85% of average keystrokes in English text can be typed without chording, and chords are limited to 2 fingers (opposable thumb and one finger). As a result, the FrogPad has many more keys than a GKOS or Microwriter or Baudot keyboard but fewer than a conventional computer keyboard. The founder and CEO of the comp...

The only place I can think of where a double mouse click is used is in manual piloting.

Considering many other actions are able to be remapped, perhaps being able to remap manual piloting to a single click or a key is desirable.

The “only” legal way of using macros is by having it press any combination of CTRL, ALT and/or SHIFT + Key.

EULA is phrase the way it is because you are only allowed to do 1 action per key press.

Used my keyboard to create F1+F2 etc and assigned them to keyboard G keys(18 G keys).
Purpose of it was to pilot 8 rep loki to turn its 8 rep to 4 so I dont brake my keyboard.

Think this sort of use might be pushing the boundary of the EULA, weapon systems may be one thing, but utility, RR and others may not as they cannot be group’d by client without the use of macros and as such they would give you an advantage (however small it may be).

Speaking of… It would be amazing if remote reps and smartbombs could be grouped.
As for “double click to move”, it’s such a basic function it should be possible to rebind it in input settings

After reading CCP and ISD answer regarding double-click macroing and having read the rules again, it is my judgment that it is legal to remap the “double-click” on a button or a key and this would not be considered breaking the rules.

People with small hand (hard to reach buttons) and/or people that have low motor skills (hard to push two different keys accurately and frequently) have a disadvantage compared to those with larger hands and higher motor skills. The option to combining two keys into one makes it so that the game play is fair.

This is why same disadvantage, people that have CTS and other Repetitive Strain Injuries (RSIs), can become fair for everyone if double-click is remapped or macroed into one button or key.

People that use double-click macro will not have an advantage over other players in the same way that players that don’t use CTRL, ALT and/or SHIFT + Key macro have disadvantage over those that do.

The natural disadvantage that macroing CTRL, ALT and/or SHIFT + Key dissolves, that is, to have to switch ones gaze from the screen, look at the keyboard during the game-play, finding the two key combination and pushing it, accurately and frequantlly and/or not being able to reach two different keys due to having small hands, so must the natural disadvantage of forced double-clicking be dissolved. Done so by giving players the possibility to relieve themselves from bearing the pain and burden (physical and mental) of double-clicking.

This is why macroing double-click is in my opinion not only allowed but and issue that involves our inherent right as human beings. CCP mustn’t only allow me to macro double-click but to also inform other players that "they are not forced to double-click if they cant or don’t want.

I am willing to challenge any banning or threat of banning due to the use of macroing double-click in any debate or court of law (that is if i am banned). But i would advise CCP to start a dialog regarding this issue and/or clarify the wording of the rules imposed on us. I also advise CCP to not and not take the dictatorship path and ban me (i am not suggesting that CCP is run as a dictatorship, but that if rules are unclear, instead of conversing and clarifying, resorting to banning, which wouldn’t be cool at all ).

I am willing to put myself if harms way for EvE community, to set precedent and/or to hopefully make CCP take a stance on this very important and vital issue.

May my sacrifice be appreciate by those that respect rule of law and wish to play a game without forced continues double clicking.

Your “judgement” is meaningless, the GM’s answer was pretty obvious and clear.

Yes to me it is clear that CCP do already allow macros and the macro i can use is also allowed based on the arguments made.

To remap one key to another key or button can be made within the client already, even combining several keys to one key is allowed. Double click IS NOT two separate key strokes. As mentioned before two single clicks are not a single action, it is same action performed two times (select, highlight). Double click is an actions and it can be remapped.

The logic is sound and can not be refuted based on the wording of the rules as it is formulated now.

Double-click is an action-function which is comprised of hitting mouse button 1 two times in quick succession. The client does not have a shortcut for performing this action, hence the GM’s reply.

The Ctrl, Alt, Shift + Key combos are allow, as far as I’m aware of, because you could just aswell keybind the shortcut to one single key, instead of a combination, as such it does not give you any particular advantages.

Key-combinations is only a way to give you more “keys” than the usual 108-ish you physically have (excluding any special keys) on your keyboard.

People with small hand ( hard to reach buttons ) and/or people that have low motor skills ( hard to push two different keys accurately and frequently ) have a disadvantage compared to those with larger hands and higher motor skills. The option to combining two keys into one makes it so that the game play is fair.

I disagree, the argument is about advantage and disadvantage, time it take to do certain action, ability do do certain action effectively, and i have already stated how less of an advantage you gain by macroing double click compared to finding and accurately pushing three separate keys at once (Ctrl, Alt, Shift + Key combos) for some people.

If you believe you gain more advantage by macroing double click compared to macroing three keys into one, then i guess, you are as honest as you can be to yourself. I still don’t believe the action is unlawful and no one else at CCP can either if they a are honest to themselves.