Vargur: How much Cap reserve is enough?

Since I’m a fairly new EvE player (played a bit through the years but never really skilled anywhere and it was so long ago I lost my accounts) so far on my EvE adventures I’ve preffered CAP stable, or as close to as CAP stable ships as I can. This has however come at an expense of DPS and other things…

Now I’ve skilled into a Vargur, and while I can make it close to cap stable, I need to either skimp on DPS or Buffer, which I don’t like and the hugely expensive bling modules are currently off the table.

So my question is, for Lvl4 missions, with good module management, how much CAP reserve is “enough”? (In minutes and seconds) Thoughts and suggestions are very welcome.

Just to clarify, when I say “enough” I would like to know what other people who run lvl4 missions, and are much more experienced than I am, with an active buffer tank, usually have in a time reserve.

You don’t need a huge amount of cap and a marauder doesn’t need to be anywhere near cap stable. I would say you can comfortably get away with 7minites because you want to be blitzing those missions not hanging around killing everything.

That being said don’t skimp on tank and keep a travel fit on you for going through gates. The time it takes to dock up/use a mobile depot and switch to more tank and some grapple will be well worth it when it saves you from being ganked on a gate.

1 minute of cap is more than enough for a Vargur.

One minute as people have said. Most marauders can reach 10k ish cap. So 5k is more than enough to pulse your XLSB.

I actually use a Large shield booster on my golem. Gives me more fitting room for high slots and I don’t need to waste rig slots or an implant slot.

Lv 4 DPS is nothing. You can easily leverage your DPS Tank (killing the BS/DPS ships fast) and your shield buffer. One thing about using an undersized booster is you should always be in bastion to get the extra rep.

Finally, there is no need to have a ship ESPECALLY the vargur cap stable. (Projectile guns don’t use cap) Judging by OP’s post he may be over tanked for the missions. He could likely swap out some modules for application.

It’s all about what your confrontable with OP. Hope it helps.

Well people do like blowing up Marauders so the mission isn’t the only thing that he might want to tank against.

Thanks to everyone for the replies. I do really like the Vargur, makes missioning a breeze though I do struggle with it in the bigger missions (if I don’t manage the waves properly). I see why those blingy modules are so well liked by everyone.

I was actually under-tanked, so now I’ve increased my tank at the expense of less CAP, and with proper pulse management I actually have much better survivability, though I still can’t afford those 1 Billion bling boosters.

I am now considering removing my MWD, and getting an ancillary booster in there for ganking emergencies. As i have both a MWD and a MJD fitted, I don’t really move around the grid that much, except in emergencies, I usually return for the salvage in another ship. Though to be honest the salvage time vs reward is totally out of whack. But those are topics for another thread.

So i hope this doesn’t come across like a “you’re wrong” commemt. But above, you mentioned the cap stability issue. Yet further below, i see mention of a mjd. Would you be Arty fit by chance? If so, most of your tank is the range from the mjd. Ideally you may have to pulse your booster once, if that.

My suggestion would be to go an AB/ Autocannon fit. The firepower is impressive and the mwd and mjd isnt as important there as youll be stationary. Go big to small on your target priority and youll find missions go way faster than an arty fit. Hope this helps you.

Cheap and easy, incredible mobility on the grid to get in Hail range asap (and away from the warpin point of the mission), while still being able to snipe frigs at long range. And yes, you want that Cloaking Device in case you jump a gate and see a bunch of Tornados wating for your right there or a TackleMaller with 20 Catalysts on Dscan… The longer locktime doesnt really matter, since you can lock up to 12 targets and lock all the smaller stuff while shooting the bigger stuff, after a few missions you don’t even notice any more.

Even if they manage to gank you, there is not much to loot from this wreck, so no shiny killmail.

You can always go bling on Implants and have a brick-tanked Assaultfrig in the Escape Bay (with Assault Damage Control!). Enjoy.

in the paper its really great ! but in real situation is not a good fit. 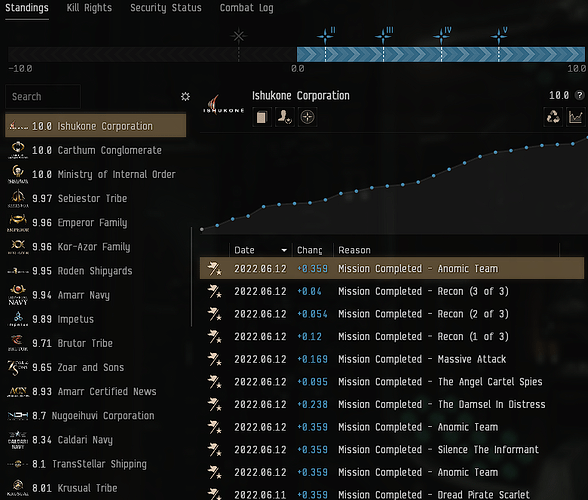 My wallet says it is. If you want to take a look at the standings, this ship has successfully done hundreds of missions, dozens of Epic Arcs. And it never died. It is quick and efficient and offers no loot to gankers, so you don’t end on a list of blingchars to track.

I would swap out DCU for another Gyro or TE; DCU completely useless. In the 99% your running missions.

My wallet says it is. If you want to take a look at the standings, this ship has successfully done hundreds of missions, dozens of Epic Arcs. And it never died. It is quick and efficient and offers no loot to gankers, so you don’t end on a list of blingchars to track.

Just paranoia and that’s ok. My perspective? My golem is a lot more blinged. I run in the same mission location. Never been ganked. Never even had the perception one was coming, or I was being followed.

In your situation I agree. If you are doing epic arcs and traveling than a cheap fit is the answer. For normal mission running? Meh. I can tolerate more risk.