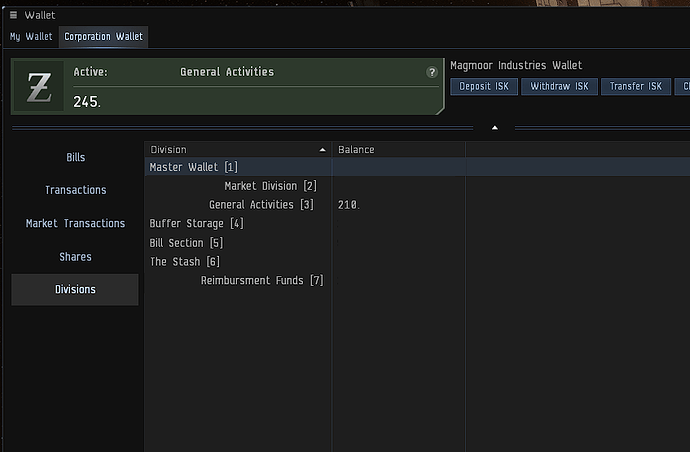 Little bit of a weird situation here. We all know that the old wallet cached your changes and delayed displaying these changes for a few minutes or session changes. But the new fancy card at the top displays the changed amount in the wallet right away. So, even after 2 gate jumps and deactivating the wallet and reactivating it, the old portion of the wallet still shows the old value before deposits, while the new portion of the wallet shows the new value instantly if you make the division active.

Why can’t we have that for the entire wallet then if some parts of the wallet can do it anyway?

Check back later. In my experience the item doesn’t get removed immediately.
The message you get is because its already trashed.

There is a delay in updating assets.

Unless the delay is days, it’s not that either. I tried to trash a shuttle today in the morning and it’s still there in the evening.

I still only see 2 rows of skills in my new skill window. And when the popups show I cannot scroll and have to move the mouse away from them. I was ho[ping CCP would be working on fixes for the remaining problems… but…

I saw in the news that a monocle is added to the clothing store again. It made me remember the original monocle disaster, and I re-read some of the old news and leaked document from way back in 2011. I don’t know how many people on the forums remember what happened back then.

When I read the old news, what happened back there with the monocle felt surprising similar to what happened now with the new UI and feedback from players being ignored about bugs and shortcomings and then rushing the product out the door, and only fixing afterwards.

I really hope CCP does NOT holds the same views as back in 2011.

I really hope not.

Because a document from 2011 titled “Greed is good” from CCP was leaked. The document was discussing adding monetized decorations (the monocle and clothes) for RL money for the first time to the game.

The document expressed that the overwhelming perception among players was that the changes back then was very bad. But a few people at CCP felt the changes were brilliant, so they went ahead. The document also mentioned that they did not go public with the changes beforehand because of they were worried about the angry backlash from players…

Sounds very familiar to what is happening now.

So please CCP learn from past mistakes about keeping your customers happy. Please keep working on fixing bugs and problems and improving the game. And please focus LESS on cosmetics and decorations.

Nah, what’s happening with the new skill UI is in no way comparable to The Monoclegate, not even to the problems that led to it. For those who weren’t there at the time, there’s a documentary about EVE, available youtube. I’ll even point to the appropriate timecode.

Any update on when the UI is going to get fixed.

So much wasted space. 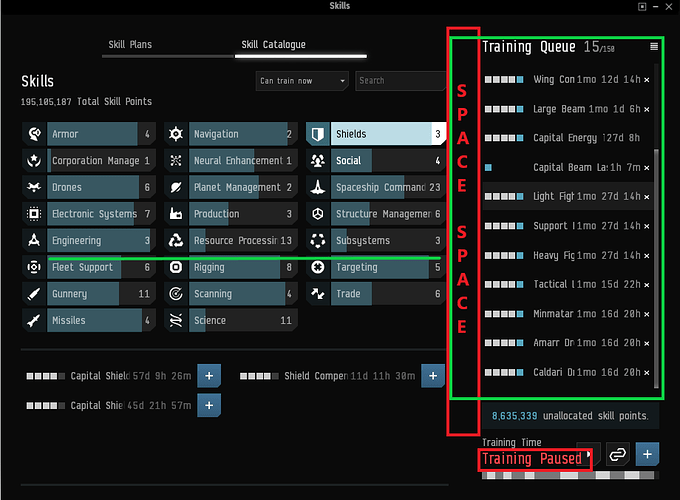 I was there when it happened.

The 2 events are not the same of course. I never said they were the same.

Maybe I could have phrased it better in the previous post and caused confusion. But if you re-read you will see I was referring ONE thing that happened in both cases - CCP knowing about huge negative player feedback to a proposed new idea. Seemingly ignoring it. And then pushing the change on players anyway.

The other thing that was similar was the focus on cosmetics and aesthetics - instead of functionality. But the main thing was I was asking CCP to please listen to feedback from players before rushing ahead and then having to frantically fix afterwards.

I would like to be able to import skills to a skill plan from clipboard, you can put skills straight into your queue but what about when you want to create skill plans for community driven stuff?

That should have been in there from the start as it’s the most obvious use. It’s a mystery to me how they were able to ignore that.

I was referring ONE thing that happened in both cases - CCP knowing about huge negative player feedback to a proposed new idea. Seemingly ignoring it. And then pushing the change on players anyway.

Yup, totally. On other occasions too, and more than I care to try and remember. Sometimes, it does feel a little facebook’y in here ^^’

Back to the topic: since the update, I sometimes have weird wallet change notifications (the pop up alongside the neocom), with a negative amount — usually –0 isk — instead of the positive amount that’s actually occuring. Happens for mission pay out, especially if there was a collateral, for NPC bounty too… but not every time. Not often enough that I could caracterize it with more specificity, or even prepare myself to take a screenshot, though.

Fantastic, now I am stuck with a shitty transparent char window…

Just checking for personal reasons, have you never changed your character portrait? Or have you been using the same one forever and don’t want to change because it’s… well damn it’s perfect!

stop paying the subscription for 2 or 3 months

you are a real martyr!

Anyone else getting the Red Dot again?