I hope the menu size gets addressed soon, screen space is at a premium and anything that takes up more should automatically be a flag that it’s a bad idea. BRM should probably be set to where they were before the change–even with the changes it allows players to a large degree to control their own levels–the sudden drops were unnecessary. As for reserve bank most players don’t care at all and the game really doesn’t give them much reason to–IMO it should be set up much like the main banks with a long term payout and mouse over so folks see what sort of isk they personally have at stake–other than that most could care less if someone takes it.

Needlejack filaments need a minimum range setting. Last week we used one filament, and landed in blue space six jumps away (but across a regional gate). Waited 15 minutes, used another, landed back in our home region, six jumps from where we started. Waited another 15 minutes and used another, and finally ended up on the other end of the map. System is horrible broken.

Client has a severe memory leak problem, since (I think?) the 8th. It’s not even using up much actual memory, just slowing to a crawl and eventually dropping the connection.

Any news on this?

The ones that you can inject directly are supposed to be on the market, too. Them disappearing was likely a bug.
I hope they are not removing market skillbooks, I enjoy going to fetch them.

Agreed. I also very much enjoy “holding” skillbooks before I slam ‘em into my toons’ brains.

And it’s one thing for new skills to come out and not be on the market (examples I’ve had to buy from the character sheet and autoinject from the past couple years include: Salvage Drone Specialization, Fleet Formations, Fleet Coordination, and Industrial Reconfiguration, but I’m sure there are others)…

But for OLD school skills like mining barge and exhumers that we could buy and trade and sell and haul around and inject into our skulls to no longer be available from your local NPC station skillbook store? That’s really not cool, CCP. Hoping that’s a bug, not a feature.

Hopefully a fix is in the pipeline soon

Glad you acknowledge it as a problem that needs solving.
Hope you get it fixed post haste and not… "Soon™… "

Any ideas guys? I am getting near constant disconnects since the 23rd. It happens at different times on different alts. My internet is fine with no issues…

I’ve raised a support ticket but am worried they’re going to go down the internet being at fault route when I know it checks out fine. The game is unplayable at the moment. 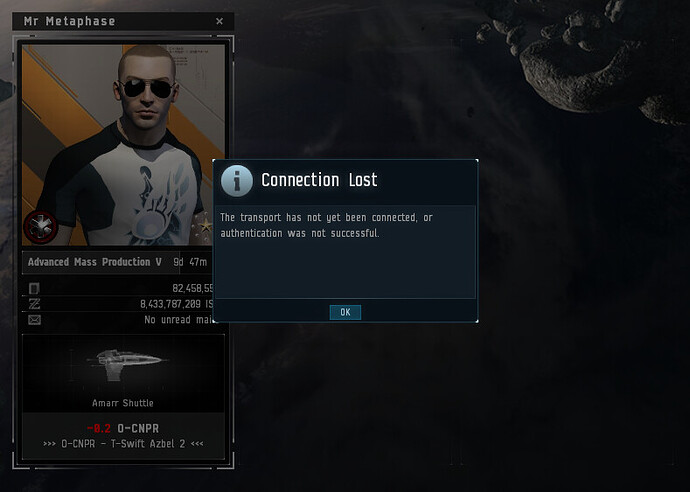 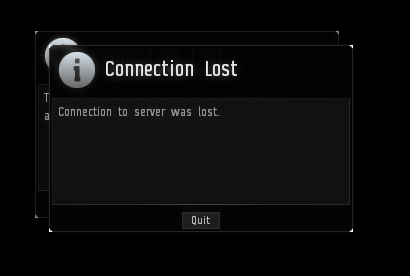 are you in the UK and have Virgin Media as your ISP?

Uk Virgin Media customers are having this problem:

Hello everyone, We are looking into the connectivity issues which have recently started affecting certain players in the UK. The issue lies somewhere on the route the connection takes before it reaches the EVE Online servers and we are yet to discover exactly where the source of the problem is but as far as we can tell from the reports we have received so far they are customers of Virgin Media ISP. If you are based in the UK and have recently started experiencing regular disconnects from the g…

Any ideas guys? I am getting near constant disconnects since the 23rd. It happens at different times on different alts. My internet is fine with no issues…

I’ve raised a support ticket but am worried they’re going to go down the internet being at fault route when I know it checks out fine. The game is unplayable at the moment.

Are you in the UK and is Virgin Media UK your ISP? If so, head over to this thread: 20220225 - Connection Issues (UK). Summary: You need to send a support request to Virgin Media UK, referencing their internal ticket F009669229.

I have a few questions about the new skill training icons:

My big question is why is the pooh-brown ‘paused’ circle bigger than the blue ‘training’ circle? See the images below - you can actually see the unused circular space around the blue training circle. Is this a bug? Or is it intentional? Why is the blue progress circle smaller when it should be more important and prominent?

I’m still not sure what the icons look like. Clearly it is not a skill book and intuitive anymore.
Is this a 2-prong electrical socket? What do I plug into it?
Or is it a plate with 2 sausages?

Did someone take a bite out of a doughnut and put it back in the cupboard until it turned blue from mold?

Can devs confirm when we might be getting a fix for this?

@CCP_Paragon Hello, any update on this item. Aside from the side bar the random text on screen larger than life is really starting to get irritating now.

@CCP_Paragon Please fix Neocom menu bar, accidently made it large and now i am no longer able to make the bar and icon smaller, so annoying.

Having this same issue.

I Hate this! right now, Its so annoying. My computer crashed and reset and now i cant get my bar back to the same as it was

Just so we’re counting, it has been 3 months since this was broken.

I am now wondering why this issue was removed from the list as it does not seem that it was fixed.