Morning again. It’s easy to lose track of my cycle without time stationside.

Gates active, star unchanged. Looks like they didn’t do anything big while I slept.

I wonder what the Triglavians actually live like, day to day. I’ve read the theory-- “troikas,” tripartite persons. But is that everybody, or at least, everybody incarnate? Are there other voices, part of the “flow” but not given bodies to inhabit?

When ARC got a hold of a Drifter corpse it turned out to be mostly nanotech; not much “human being” left beyond the extremely superficial. The human corpse provided a sort of base shell for the rest, but there really wasn’t much biology there.

With what we’ve seen of Triglavian bioadaptives and how cagey CONCORD has been about what they’re physically like, I imagine them being nearly the opposite: vigorously biological, though so distorted by frequent bioadaptive use that a lot of what we think of as a human form might kind of get lost in the mix, especially over time. That kind of radical alteration would probably have other effects as well. I’m sure they don’t die of cancer, but I equally expect that it’s a constant issue. Depending on how rooted they are to particular forms, they might just have a troika switch bodies when a given one becomes too unstable.

Maybe some time in the weeks ahead we’ll get to actually find out. (This isn’t the first time I’ve said that, though.)

World Ark active. Apparently they’re active in several of these systems; maybe all of them. Some of the equipment they’ve apparently deployed is a little alarming, like a sensor doing gravimetric readings and referencing them against a set of Abyssal coordinates?

It makes me wonder if I really am going to wake up in the Abyss tomorrow or the day after.

Can they be shot?

do we have details on what has been deployed ?

Can they be shot?

Don’t know if anybody’s tried, and I’m basically an invisible pair of flying eyeballs with a warp drive right now.

do we have details on what has been deployed ?

Apparently there are three sensor types: an “Entropic Monitor,” which appears to be monitoring negative space and null-energy zones; a “Fermion Monitor,” which is monitoring, maybe, somehow, the subatomic particle configuration of the entire system (?!) (CONCORD doesn’t think this can possibly be right); and the “Graviton Monitor” which I gather is basically an old-fashioned graviton sensor like the ones Caldari ships use, only the data it gathers is being lined up in the context of data from some random bit of the Abyss.

Taken together I’m starting to think my Alarmist Abyssal Hypothesis speech at the last Yulai conference is looking more like a theory. That’s … not good, because my “hypothesis” was that they’re planning to take a bunch of stars and related objects home with them.

Humm…
I must go see this.
It looks like it would be a good complement to the results of the analysis of the transmuter arc and I did.

Your theory is one of the possible scenarios.

Another morning, another status check. 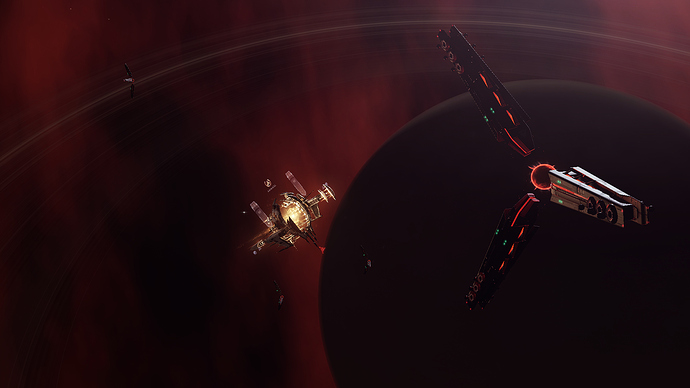 There’s a World Ark active in system. If we destroyed it or (way more likely) drove it away, would it change things meaningfully? There seem to be other openings for interference as well. It seems too much to hope that we could claw these systems back, at least right now.

Maybe all we can hope for is a chance to finish evacuating people.

Either way, I suppose I shouldn’t be surprised that it’s taking them a while to settle in. Or to pack, as the case may be.

If we destroyed it or (way more likely) drove it away, would it change things meaningfully?

Drove it away? Maybe not. Destroy it? Yeah. Yeah, that’s gonna change the Trigs’ whole picture of things.

Which is why I still don’t know why the empires didn’t bring in a few hundred titans and lance the hell out of those things whenever they showed up.

Well, whether or not we can slow them down the local kybernauts are apparently trying not to let EdenCom get even a teensy toehold. 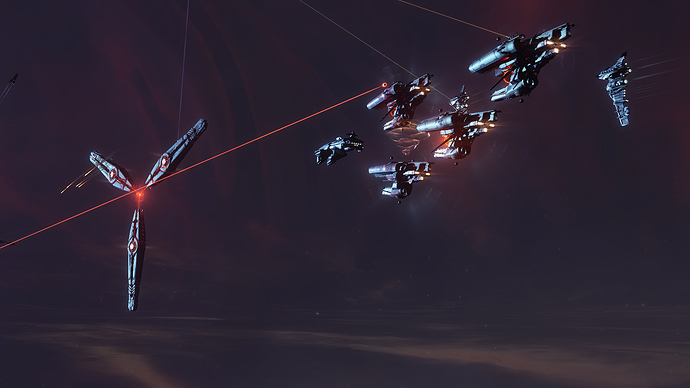 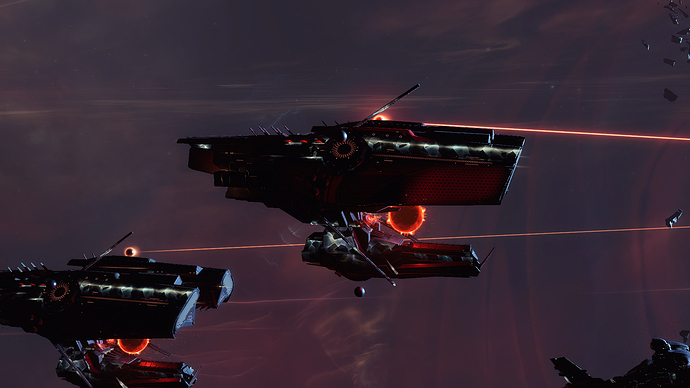 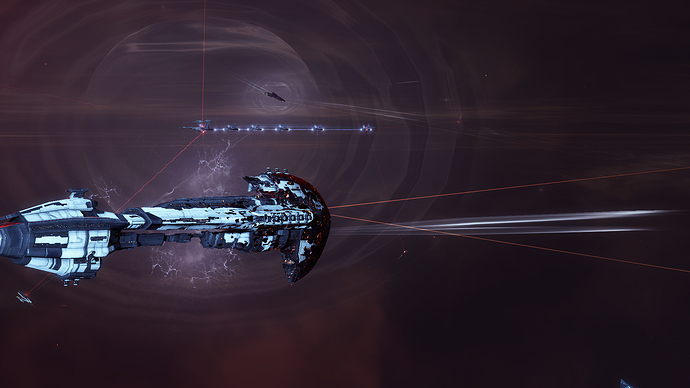 Apparently the observatory flashpoint is still a flashpoint. It doesn’t look like this round’s going to work out well for EdenCom.

Full disclosure: the local kybernauts told me they were doing this. It’s not like I can stop them, and, really, we’ve gotten along okay; they’ve been tossing me some good intel. They want to know what’s going to happen at least as badly as I do-- probably more; I don’t have major assets in system, just myself and the Inkstone (my anathema).

I’m a little surprised EdenCom still has forces active here. I guess you don’t write a whole system off lightly, even if it’s kinda sparsely inhabited. But even a win …

… it does seem we have some time to wait, probably, either way. I guess there’s nothing wrong with taking data where I can get it.

It seems more like EDENCOM is trying to glean as much data on these stars as they can before they have no more opportunities to do so. They’re not getting much leeway from the Kybernauts though, my sources tell me a number of them pounce on the observatories as soon as they’re put up.

I cannot agree more with you. That’s why I think that all scientific data must be shared.

If we know what could happen I think we can call things down.

If what they are doing is dangerous for the system’s integrity, I think most kybernauts would re-think their position.

If what they are doing is dangerous for the system’s integrity, I think most kybernauts would re-think their position.

I … respectfully can’t agree, sir. The kybernauts I’ve spoken to haven’t mostly been very clear on the why, but they were extremely clear on their dedication. It seems like as long as it’s under the Collective’s guidance, they’re mostly kind of up for whatever’s going to happen. The whole system could be extruded into the Abyss through a conduit like meat through a grinder, planets and all, and they’d probably just kind of hang out and enjoy the spectacle.

(Some of them might get upset about their own assets being handled that way, but that’s a reason to start packing, not to switch sides.)

Meantime, it seems like a lot of them are finding ways to profit pretty handsomely off the situation. 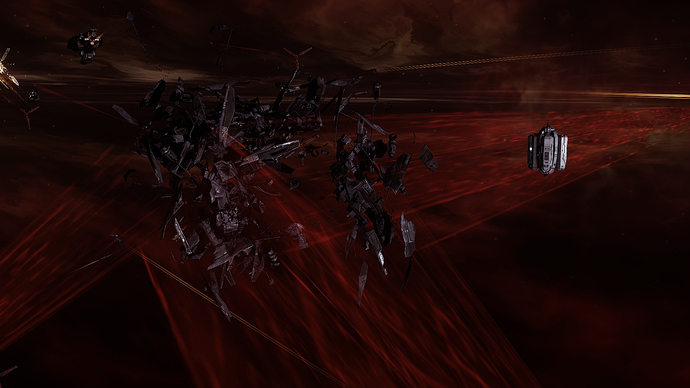 A mobile tractor unit (MTU) raking in Autothysian Lancer wrecks, along with the occasional passing traveler. When there’s a Drifter wormhole active in system, it gets Drifter and Triglavian wrecks too; they really don’t get along (and the Drifters can inflict losses even on the blockade).

Best thing for the local kybernauts is that of course the Triglavians are friendly to them, so whoever is running the industrial out periodically to unload the MTU has extraordinarily dangerous guardians. Absent, like, maybe, a carrier hot drop they don’t have much to fear.

That or rival kybernauts, I guess.

we com`n with nuff ruffness

Another Triglavian broadcast to those of us who own consoles.

Haven’t seen a translation of the text. Image matches the Sasiekko gate at Raravoss; doesn’t match anything in Kuharah or Niarja.

Thank you for your continued documentation, I suspect they’ll be making a move for stargates soon to cut off their new gains from future meddling of EDENCOM or others.

I also suspect that wormholes from Anoikis will continue connecting to these systems in spite of the Triglavian’s efforts, barring any huge developments. These should provide pathways in for any future efforts to reclaim these systems, or out for anyone still trying to evacuate. Triglavian spatiotemporal technology is more advanced than our own, but still conceivable enough for Upwell to reverse-engineer needlejack filaments. The Talocan static gate network should theoretically hold its links to Triglavian-controlled systems since it’s far more powerful, ancient, and baffling technology. Or perhaps that’s wishful thinking on my part, due to my reliance on the ancient network. 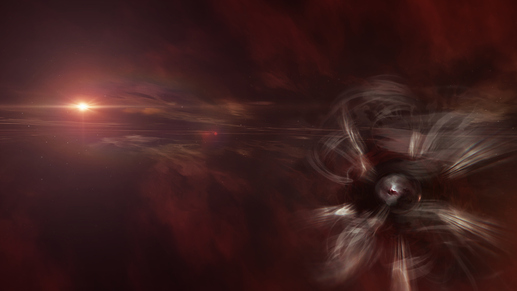 has a translation been made ?

Someone at ARC (I think @Uriel_Paradisi_Anteovnuecci) apparently had this translated before I knew it existed. Which is as usual.

Word is, the characteristics match Raravoss.

thanks for your continuous sharing on the situation, it is deeply appreciated.

I hope more of this data will be obtained, it would allow to do more concrete projection and hypothesis.

I can clarify. My reason for siding with the Triglavians:

They have really cool ships and I want them. The planets and peoples of Kuharah will adept. I dont see how triglavian rule is worse then Amarr. I dont care, but you could argue we’ve liberated as many souls as we’ve condemned. Regretably, they live in the same universe as me though. This means they are responsible for their own survival. Everyone has been at the mercy of cosmic events. You either change, exploit and thrive, or stagnate and die. Those who flows proves worthy shall prosper. All I see is a power shift, and I enjoy those.

Their predisposition towards the Sansha, my mortal enemy, also makes them natural allies. Their vile existance must be purged from every corner of the New Eden, and I’ll enjoy routing their stain out of Kuharah permanently (if able :P)

Third, we are claiming a stake in potential new content for our alliance. Let it be know that Rekking Crew’s Triglavian Cartel has setup shop in Kuharah. Glorification in combat awaits all who wish to test their flow.

Fourth. Edencom smells like Concord to me. I’m a lowsec pirate. I do any and all things to mess with concord.

Can you spot the difference? Zorya approaches…