What ship for transporting around 70m

Rather not be the next creator of the ganking should be illegal thread so I have come here to ask for help before getting myself killed. I will transport around 70m to jita across high sec systems. I have about 5m budget to get a ship and tank from scratch that I would like to use in the future. Any suggestions or fits?

It would depend on the cargo volume.

Nobody will kill you over 70m if you are jumping gate-to-gate and not using autopilot. It would take a tremendous effort to catch you and highsec is full of juicy, easy to catch prey.

Whats the differance with autopilot

Warping gate to gate gives a ganker about 1 second to lock and scram you. Autopilot gives them about 30 seconds. There are a few specialized gankers that focus on autopiloting ships and they are often willing to shoot at just about anything they can kill with a max-dps thrasher in one or two volleys.

Try to get below 2 seconds align time (with your propmod off) but below 3 is fine too.
Rigs, either low friction nozzle joints if it gets you below 2 seconds align, or hyperspatials for faster travel.
Put some extra hitpoints on it (medium shield extender, EM shield amplifier) against smartbombs.
Maybe a MWD, but not necessary.

And you’ve got yourself a good cheap travel frigate!

Or you could use a Sunesis, they are pretty easy to get below 2s align too.

What do I use for more power?

What do you mean, more power?

Gunpower, as in DPS? You don’t need damage, your strength is flying away before you get caught.

Powergrid? If you don’t have enough powergrid, there are skills you could train, but the easiest way is to swap modules for a compact meta version.

I meant like power for the ship because it said I didn’t have enough. I will get the compact one though tysm.

<2s align and enough tank to shrug off a couple of smartbombing battleships.

A Sunesis has decent cargo space, good align time from the start and can be improved a lot, it can also fight to some degree and can have drones which can be helpful.
Also they look great in my opinion, and no one pays much attention to them as they are thought of as ships for alpha clones and new people.
I think, but I’m not sure that they are around 4-6m depending on where you get them, I have a bunch so I haven’t bought one in a while.
Also they have scanning bonuses so you could escape into a wormhole if you get trapped in highsec.
For just hauling though I would use a hyperspacial velocity optimizer, and two low friction nozzle joints in the rig slots, and a couple of inertial stabilizers in the low slots. You would warp faster, align fast as hell, and the rest of the slots you could have fun with. SMARTBOMBS! They only kill BAD people! Wait, no, they just anger everyone, forget that last bit.

One other thing, cargo ships look like they might be used as intended, people will scan them to see what’s in them, but a destroyer doesn’t, and they very rarely get scanned.

How much would the thing you suggested cost 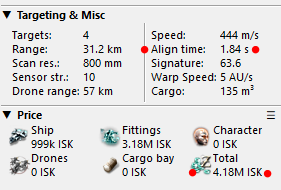 The Type-D’s are overkill as the last one is only buying you a 0.03 second reduction and spacials in rigs didn’t help at all.

Watch the Extenders as this pretty much doubles the size of your ship resoloution (speeding up their lock time). Though to be honest, and in a few weeks/months you’ll see this, your only worry is being collateral damage. No one is going to shoot you intentially.

Given the above. Anything you have to ‘turn on’ is probably a waste of time if it’s smart bombing BS’s your caught up with… hence no damage control or hardeners.

When he has a bit more money , a hecate will be nice with sub 1 second align using nomad implants