Where did the Local Bookmark Window [on Singulartiy] go?

Did the “Saved Locations” window got rationalized? At least I could not find it in the short-cuts menu anymore.
If it’s gone, that would be a huge problem for me. I have reached the limit of 3000 bookmarks for a while now and continue to save more in a second folder. And I don’t expect my bookmarks to get fewer. Quite the contrary.

The big benefit of the “Saved Locations” currently on TQ is that it does not distinguish between folders at all.
It just shows what bookmarks I have in the current system and updates after every jump. No nested folders that take up space.

This is how many bookmarks I have in a system I frequent more regularly. 1-2 pings per gate, 1-3 safespots, undock- and docking-pings as well as the odd spy-spot. I’d hate shift through those in nested folders while trying to escape a gatecamp.

I attempted a workaround, by opening a folder and ordering by jumps. But that only somewhat works if you do have not more than one folder. Otherwise, I need a second one.

If I order my bookmarks by regions, then I would have to switch what folder I have up when moving around every time - also not very nice to do.

Please do not remove the “Saved Locations” window! I need it! 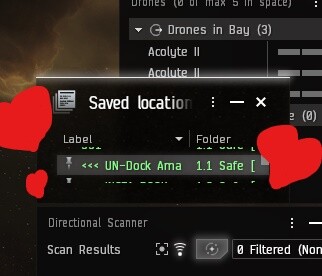 But good job on the compact mode for these windows. That part works really well.

I second this. Please make the Local Bookmarks window back!

first time I opened it, I dont ever close it. Its so usefull. More people should know about that definitely. And it shoudnt be gone!

At least give us a button to switch between local locations and all locations without having to go to any context menu.

But then again: I want two separate windows for local bookmarks and all bookmarks, as it was before.

Thanks so much for the constructive feedback! I agree, that window is super useful and right now we’re not doing a very good job advertising that it even exists. In an attempt to make it more visible to players we decided to try and merge the local locations window with the regular locations window. This was done by adding an option to the window’s top-right menu that allows you to flip between seeing all locations and only local ones. However, that option is clearly not easy to find or as useful as the standalone window, so we’re going to make some changes to how this works.

Instead, we’re going to add a new top-level group/folder to the locations window which only lists locations in the current system. That group will also have a button that allows you to open that group in a standalone window.

These changes should hit SiSi soon, so definitely check them out when they do and let us know what you think.

Thank you for the reply.

This seems like a solid approach to go forward with.

I’m not sure how it changed time wise since the first post but on SiSi currently local BMs has just no key bound. The standard “L” shortcut leads to locations window so it has to be rebound to work as on TQ.
EDIT: BTW, I would glaadly see agent missions bookmarks in local bookmarks window as well.

Could you please, please, please also make the Locations window work with the jump/warp to/dock command (hotkey+click)? This would be greatly appreciated.

Nice to have the Locations floating window back, but can you make it behave like the old one scrolling only one line not 3/4 at once? Tks.